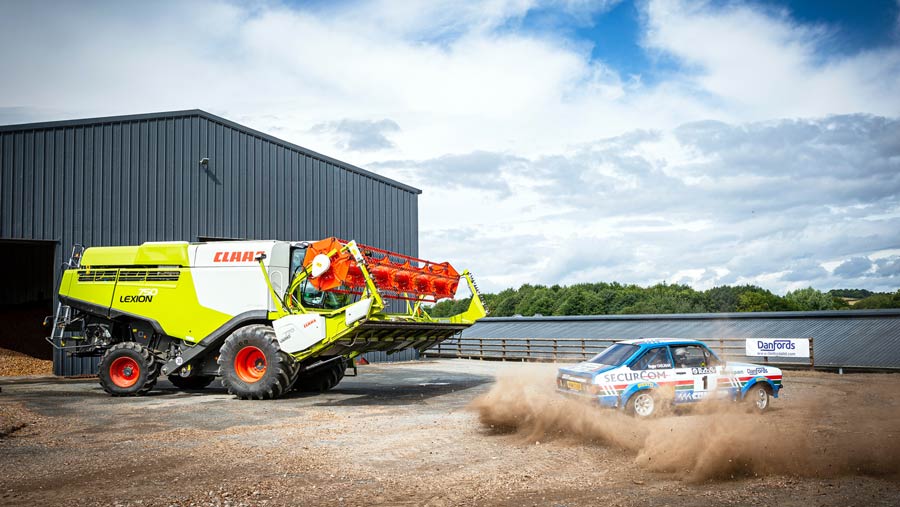 Herefordshire farmer and rally enthusiast Roger Chilman banished the Covid blues by putting his driving skills to the test around his farm.

The coronavirus pandemic has hit rallying events across the UK, with a number of high-profile events already cancelled, including Wales Rally GB – an event that regularly attracts more than 100,000 spectators.

After realising most of the UK rallying calendar had been decimated, Mr Chilman decided to combine his twin passions for farming and rallying by hosting a stage around his mixed farming enterprise.

He said the family farm, which he runs in partnership with his parents and brother, was the perfect backdrop to have some fun in his Escort RS1800 and to give something back to his sponsors for their tremendous support of his rallying activities.

The 607ha farm across north Herefordshire consists of an arable business, alongside a poultry and renewable enterprise, which houses 350,000 broilers in 10 poultry sheds grown on contract with Avara Foods.

The buildings, farm tracks and grass areas provided a very tricky stage for Mr Chilman to put his rallying skills to the test – and the addition of New Holland tractors, forklifts and a Claas combine made sure the farmer had to keep his wits about him.

The whole stage was filmed and edited by British Rally Media and the video has already attracted more than 300,000 viewings on Facebook in the first 10 days of release.

“If I make a mess of this on camera, I’ll only have myself to blame as I’ve designed the special stage,” said Mr Chilman.

The stage passed off without incident and the Escort remains intact.

Mr Chilman said it was “great to have a bit of fun” and “give something back” to thank his sponsors. “Morspan has built all of the poultry sheds, Connop & Son has laid all the concrete, and Securcom Security is our electrical contractor,” he added.

The coronavirus crisis has also scuppered a return for Mr Chilman to New Zealand for the Silver Fern Rally – the seven-day marathon – where he finished second in 2018. Now his focus will switch to 2021 and the five-day RAC Rally, where he finished third in both 2017 and 2019.