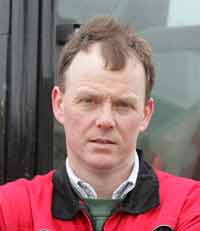 The saying “make hay while the sun shines” has been true at Upper Nisbet this year, as well as many other tasks we managed to complete.

First-cut silage started at the farm for the dairy cows run by my brothers Tom and David. Once that was completed the machinery was moved to Upper Nisbet where 150 acres was lifted into the clamp in just over three days. Although silage was lifted later than usual we were pleased with the quality and yield.

The sun was still shining when we finished cutting grass for silage and after checking the forecast we cut grass for hay. We now have 10 acres of hay baled for feeding cows in calving pens and bulls next winter.

Work has also been under way in a 10-acre area of old permanent pasture that we have been reclaiming. For every acre, we have removed 16t of stone. Thankfully the reclamation work complete.

The fine weather also allowed work to continue with improvements to the farm steading.

For the past few years we have been waiting for a quiet spell coupled with fair weather to allow us to dig out and concrete an area of yard which is prone to be rather muddy during wet weather.

Recently we entered four animals in to the annual Summer Show at our local auction mart. We managed to win the championship with a 13-month-old steer weighing in at 555kg at £2.90/kg, making a total price of £1595. The show was judged by local butcher Craig Douglas who also bought the champion.

This winning steer was the first to be sold from the 2009 calf crop. The same day we also sold the last animal from the 2008 calf crop. This bullock was the heaviest we have ever sold weighing in at 920kg and grossing £1468.