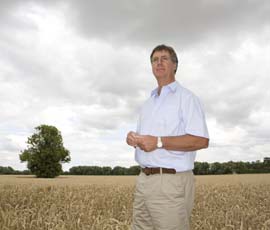 The government’s Localism Bill threatens to stifle growth in the rural economy, according to Richard Macdonald, head of the Red Tape Taskforce.

“I’m really concerned that the whole localism agenda will actually result in nimbyism, not growth,” he said at the Royal Cornwall Show on Friday (10 June). “Putting more policy into the hands of locals sounds good, but those of us in business are in the minority.”

The red tape surrounding renewable energy projects was also holding back the industry, he added. “I’ve spoken to numerous people who have lost the will to live (when developing renewable projects). That’s not because they didn’t want to succeed, and it’s not even because they couldn’t get funding – it’s because of all the hurdles they have to jump. That is, frankly, daft policy.”

Mr Macdonald was also worried about the bureaucracy associated with environmental protection on farms. “At a time when we desperately need to produce more food, I think we need to introduce more environmental restrictions and processes like a hole in the head. That’s something I’ve made recommendations to the government about, and I intend to follow it up and keep them honest to it.”