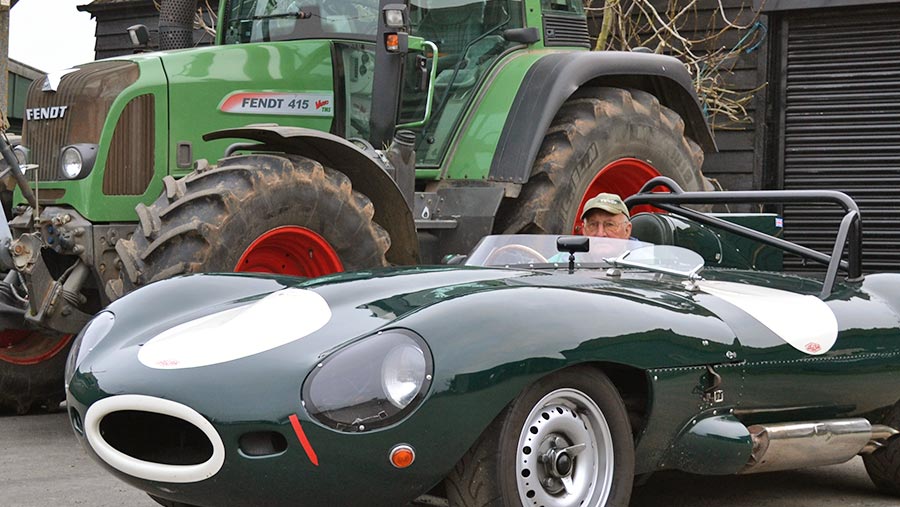 One moment Roy Millbank will never forget is racing against Jack Brabham at Brands Hatch in 1957.

It was Boxing Day and he was competing against the man who, only two years later would be crowned Formula 1 World Champion, in a Formula Libre race, an event allowing a mix of car types, ages and makes to go head to head.

Roy started in second poll position to Brabham in his Lotus Mark VI – an aluminium-bodied racer which, with the number plate POP 444, has always been affectionally known as “Pop”.

“I didn’t win,” he recalls, “but I like to think I gave him a fright. Brabham was actually in the car that he later went on to win the world championship with.”

Driving Pop – a car he owned until 1960 – was wonderful, recalls Roy. “It was powered by an MG 1466cc engine and was just over 100hp, which by today’s standards is nothing, but back then, given that it also only weighed about 500kg, it was very quick. It would have got to 140mph.” 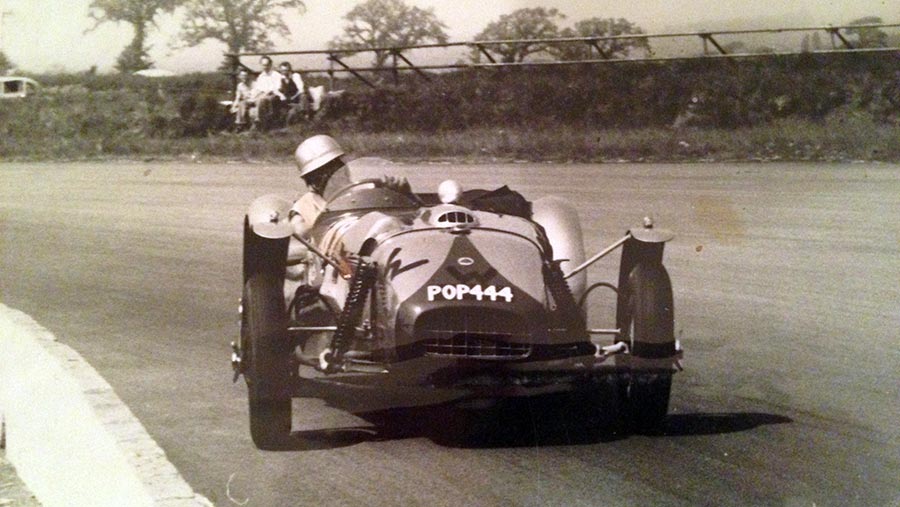 This is just one of the many special memories the octogenarian from Essex has from a lifetime juggling motor racing with his successful farming career.

“I’ve always enjoyed driving,” he says. “Whether it was a tractor or a sports car, it takes skill and there’s a real sense of satisfaction to be taken from doing it well – whether it’s ploughing a field or getting around a racetrack. Being behind the wheel of anything is exciting.”

The raft of trophies around Roy’s house is testimony, not just to his ability, but to his competitive spirit – they adorn the kitchen, the lounge, even the farm office.

There are also many pictures of the vehicles he’s had over the decades – including, of course, Pop, which partly became so iconic because it was built by Colin Chapman, the founder of Lotus Cars.

There’s a picture, too, of Roy at Brands Hatch in 1968, a garland round his neck, having just won a race in his Lotus 23.

There is another taken at Curborough in 1997 of Roy in his Pilbeam MP62. “That’s a beautiful car to drive – there’s nothing like it. It feels like you’re part of it. I bought that new in 1992 and been racing it ever since. I still race it now.

Roy’s love of driving began as a child in a time of war. “At 10 years old, I’d be driving an Allis-Chalmers Model B Tractor on my father’s farm, ploughing and cultivating. I was out in the fields when the Doodlebug flying bombs were coming over.” 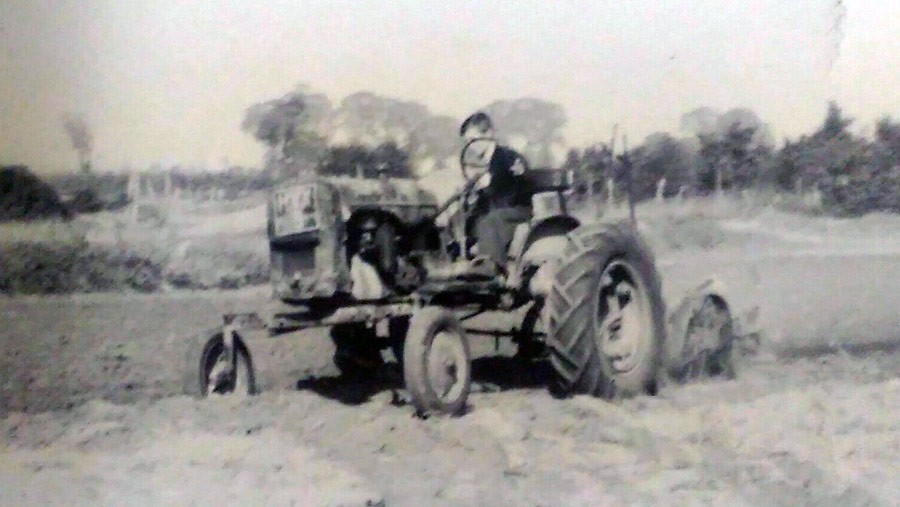 Roy learned to drive a tractor when he was 10-year-old. Here he is ploughing land on his father’s farm.

He graduated on to cars as a teenager, tearing around the cow meadows in his father’s Standard Fourteen Open Top – but the first car he owned was an MG TA, which he bought for £350.

“I’d do rallies in that and there were airfields all over the country so we to go to those at weekends with a load of cones and make our own circuits.”

By the early 1950s, he had an MG TC and was doing sprints and circuit races, including at Brands Hatch and Silverstone – the joint homes of the British Formula 1 Grand Prix.

“Brands Hatch is a wonderful drivers’ track – it’s all corners, hills and bends. Goodwood and Silverstone are straighter and flatter which isn’t as interesting.

You could race on a shoestring in those days he explains, with some races at Brands Hatch only costing £2 to enter.

Roy was earning about £10 a week from farming back then and was more than happy to spend a fifth of his wages on his greatest passion.

‘You’ve got it or you haven’t’

“I didn’t practise between races – I was too busy farming and, besides, you didn’t want to wear the tyres out. You certainly couldn’t afford to have accidents either.

“It was a totally different era in terms of how people viewed safety. In those days, we used to sometimes races in jackets and ties – or shirts with no sleeves. All I would have worn on my head would have a tin-pot hat.

“I guess I was a natural at driving. The truth is you’ve either got it or you haven’t. It’s about having quick reactions and having a real feel for the car – you have to feel everything through the seat of your pants.

As soon as he got in a car Roy became a different person, although the sport only became more competitive latterly he says. “In the early years, wherever you ended up in a race, you went home happy.” 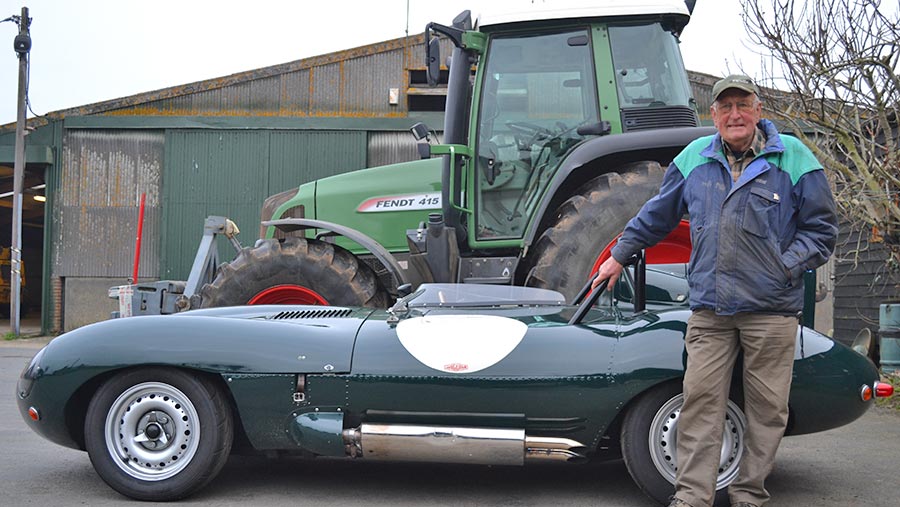 Roy kept up his hobby during his two years in the Royal Air Force in the early 1950s. He would spend his weekdays carting bombs on lorries all over the country, but at weekends, he would come home and enter events held by the Thames Estuary Automobile Club.

He then headed to Writtle Agricultural College for a year and it was during this period that he met fellow racers Alan Stacey and Peter Ashdown.

They persuaded him to get a better car – so he bought Pop, the engine of which was built by Mike Costin, who co-founded Cosworth Engineering.

He won many events in this and raced against such Formula 1 luminaries as Stirling Moss, Graham Hill and Roy Salvadori. “They went on to become famous; I just continued for the love of the sport.”

In 1966, Roy stopped racing as several people he knew – including his friend Alan Stacey – had been killed, so he focused on sprints and hill climbs, juggling these with farming.

Newly married in 1967 to wife Barbara, whom he met through racing, he started rearing pigs and cattle, having obtained a lease of a farm in North Shoebury, near Southend-on-Sea.

He even featured in Farmers Weekly in 1984 – because, with many of his fields surrounded on two or three sides by newly built houses, he was a pioneer of straw chopping rather than the then-more popular option of burning. 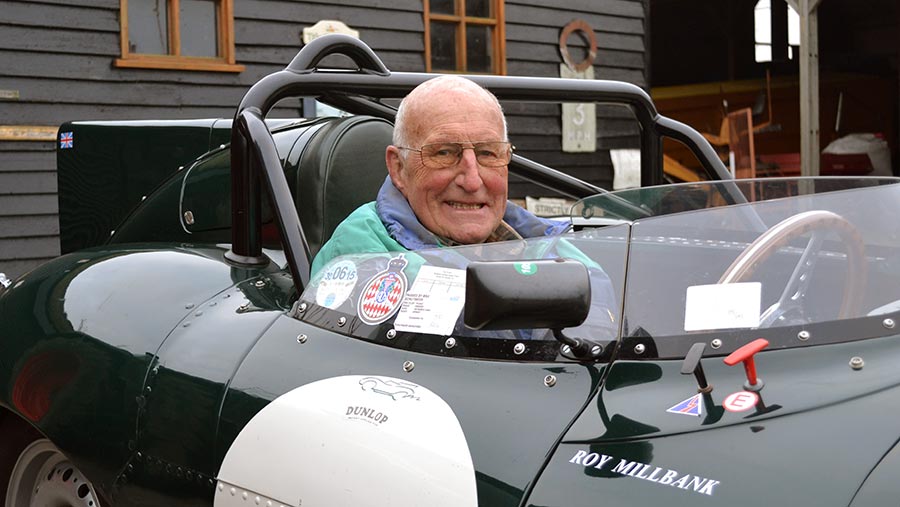 He reckons the 1950s were the golden age of motorsport. “It’s changed so much since then. It’s all about money these days.

“Then, the cars were actually quite simple; people used to build their own. It was about ingenuity and spirit.”

Nowadays the farm is 130ha of arable land, which Roy runs single-handedly, but he still finds time to race at least four or five times a year.

“I thrive on that competition. I’ve got to have a goal to aim for, I love a challenge. Everything in life – certainly when you’re a farmer – is a challenge. That’s good – life’s boring without that.”

His pride and joy nowadays is his Revival D-type Jag. Built in the 1970s, specifically designed to win the Le Mans (which they did), the car delivers 340HP with its Sigma engine and 5-speed gearbox and is one of only 12 of this particular type built.

“When I used to go out in my MG, I used to race against them and always saw it as my ultimate car. Since I was a kid, I’ve always dreamed of having a D-type. Six years ago, that dream came true.

“It’s fully road-legal so I will drive it on the road, but you have to be careful. Other motorists end up looking at you, rather than where they’re going!

“No other car looks like it – it’s a beautiful shape – and it’s sheer exhalation to drive. It’s got a top speed of about 180mph and will do 0-60 in about two-and-a-half-seconds. It’s out of this world to drive. It’s like being in a Spitfire, except on the ground.”