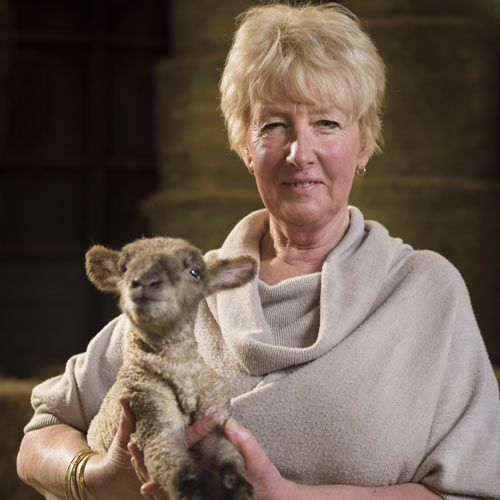 The slow grass growth and a forecast of even colder weather for the start of May mean that the herd remains indoors.

There is still plenty of silage, so there’s no urgent pressure to turn them out.

The calves, though, spend a lot of time peering through the yard gates at that big, wide world out there. They will soon find out all about it. Once the weather warms up, that is.

But nature abhors a vacuum, especially in a farmer’s workload.

While the small hole in the concrete in the yard did not at first seem to be presenting any sort of challenge to John’s day-time work routine, over the course of few days the hole grew bigger.

Water spilled from the house’s outside tap was drawn irresistibly to this maw in the paving, disappearing with a gurgle into its black depths. Then, suddenly, the opening widened again and we could discern black, murky water glinting sinisterly in the sunlight.

Shock. Was the house going to slide into a vast underground crater? Never one to hang around if he gets a chance to bash something with a sledgehammer, John took a vast crack and whack at the concrete.

Fleetingly, I wondered if that was the last I would see of him. Now where were those life insurance policies? Did they cover premature self-internment?

Nothing so dramatic. Or potentially lucrative for me, either. It was a well. Beautifully constructed with bricks laid end-on. Nine-inch bricks revealing only their end face in the circular construction.

The wooden cover of the well must have rotted in the years since it had been concreted over, allowing the area under that section of the yard to erode and collapse. I’m just glad I did not park my car there. It was directly outside a previous back door to the farmhouse kitchen that is now bricked up. I expect it was very handy before water was “on tap”.

The hens were fascinated. They balanced on the edge of the well, teetering over the side, tempting a swift nudge into the water.

As if. Ding dong bell. Hens are in the well. The dogs were more circumspect. Millie and Fizz stood back from the hole, noses twitching, wary of what might happen to them if they went too close. Both of them have been thrown into our pond at some time and had no intention of getting any wetter than necessary.

However, my three pet lambs – orphaned soon after birth and now optimistically glued to my heels whenever I go outside, in the hope of a bottle of milk supplement – nearly did take the plunge. Ding dong bell. Lambs are in the well.

Making the area safe was made more difficult when the collapsing concrete surrounding the well plummeted into its depths.

It was only after John had emptied scores of buckets of water across the yard – collected by dropping said bucket down into the water at the end of a rope – that we were able to glimpse the rubbish choking the well’s bottom. It had been necessary to empty the well manually as the dirty water would have choked our submersible pump.

With as much water taken out of the well as was humanly possible with a bucket, John lowered a ladder in to climb down. He dismissed my offers of safety harnesses and such like that my son-in-law, Chris, uses when he goes climbing.

“You’re such a drama queen,” being his most printable comment.

Instead, he jammed the end of the ladder into the muddy, uneven base at the bottom of the bricks. Disappointingly, it was not quite as deep as I had been hoping. I’ve always liked the film Journey to the Centre of the Earth.

So, bravely, I thought, I held tightly on to the top of the ladder as John gingerly climbed down. Soon lumps of concrete started to fly out of the depths as if there was a demented mole at work. Many, I thought darkly, were aimed directly at me.

We discussed building up the sides of the well and perhaps encouraging visitors to throw money in. It could present an interim payment while we wait months for the BPS cheque to arrive.

Brother-in-law Geoff rolled into the yard and advanced the theory that there might be hidden treasure under the mud. And there again, said my pragmatic husband, there might just be more mud. I looked expectantly for a few bones to come to the surface. It could have been the last resting place of a previous farmer’s wife.

The compromise situation has been that John has built up six courses of bricks to bring the top of the well level with the surrounding concrete. He has constructed another cover, this time in concrete, with a manhole access. Or woman-hole ingress, I thought suspiciously. Better behave myself.

By the next morning, the water in the well had risen to its previous height. As there are drains from two foul pipes running close by the well, there is the possibility that the water might be tainted. But John is loath to seal it off completely, seeing it as a possible strike for independence in the case of droughts and hosepipe bans, even though the water would be undrinkable.

Ahh, the nostalgia of it all – the thought of a drought, after all these months of seemingly incessant rainfall.