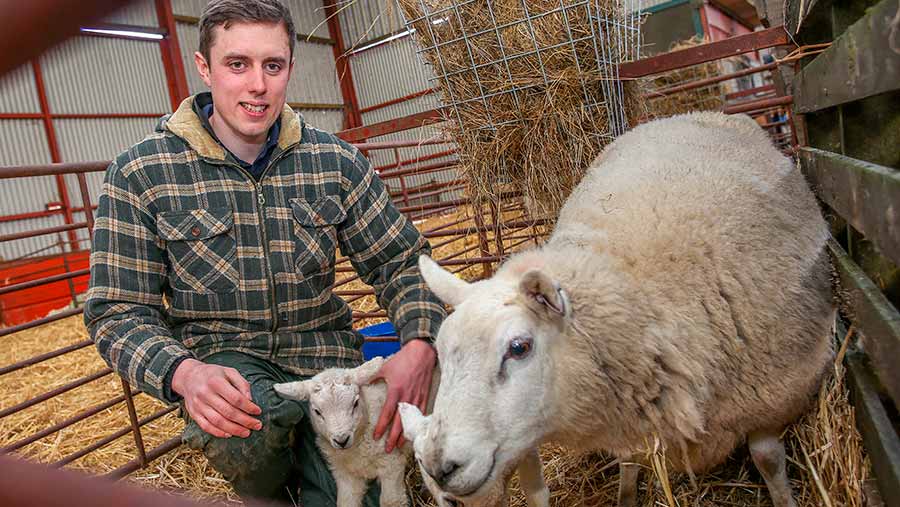 Antibiotics use and resistance is a thorny issue.

All agree that we are some way down the road towards a time when antibiotics efficacy will be much reduced. All agree that something must be done. Given that these medicines play a crucial role in limiting production losses, however, the problem seems intractable.

The issue is always in my thoughts in the spring as we lamb part of the flock indoors, which inevitably leads to the problem of “wet mouth”. This is the symptom and popular name of a bacterium that can kill a newborn lamb in as little as 12 hours.

The easiest way to protect them is to give them a small antibiotic drench as they are born, which will cover them through their most vulnerable period – the first couple of days.

However, as with all blanket use of antibiotics, it isn’t that simple.

The antibiotic in the most popular product is reportedly becoming ineffective on some farms that have relied on it for many years. This has led to some farmers resorting to alternative injectable products, despite knowing that this is an arms race they cannot ultimately win.

The situation has parallels across the different sectors – for example, blanket use of antibiotic drying-off products in the dairy sector is also coming under threat.

Succumbing to wet mouth in the lambing shed isn’t inevitable, even without help from the drugs cabinet.

A healthy ewe that has been exposed to the bacteria previously will pass on natural resistance in her colostrum and, crucially, pen hygiene can be managed to make the environment as unwelcome for the bugs as possible.

Unfortunately, this requires a level of labour that many farmers haven’t been able to call upon for decades.

Census records from the 1800s show that our farm once employed five labourers, as well as extra help in the house to cope with all those mouths to feed. (My father often wistfully remarks on a busy day how he would deploy “Bill, Joe, Jack, Fred and Charlie” to five jobs that were waiting to be done.)

Back then, of course, the land that those men would have worked was only a portion of the 280 acres my parents and I farm today. Nowadays, only field names and faint stone outlines carry the memory of long-forgotten farms and families.

It’s a reminder that countryside depopulation has been going on since the Agricultural Revolution. Much has changed since then – mostly for the better – but good people are still the backbone of every flourishing business, and agriculture is no exception.

As well as having the time to do basic tasks such as clean out a pen between one ewe leaving and another entering during lambing, and so being able to leave the antibiotics on the shelf, having an adequate workforce is important in so many ways.

It can help ensure really top-notch animal welfare, and make the difference between doing something safely or unsafely.

Andrew Meredith lives near Newtown in mid-Wales. After graduating with a degree in Agriculture from Aberystwyth University in 2011, he returned to the area and spends Mondays droving at Welshpool market and the rest of the week working with his parents on their upland beef and sheep farm.

Meanwhile, those who remain in agriculture often seem to work longer hours than ever, having to produce more with the same number of people, or produce the same amount with less labour just to stay afloat.

The smaller number of people employed in the countryside also takes its toll on local shops, schools, pubs and other services.

The sad truth is that agricultural labourers are often paid an annual wage of about a quarter the value of the tractor and implement that they drive.

This isn’t necessarily because the work they do isn’t valued by their employer; it’s chiefly because the market doesn’t recognise the value of the benefits that an adequately paid workforce brings.

Concepts such as promoting best practice, securing a stable long-term food supply, people not having to work all hours at a cost to their own health, and the value to the wider rural economy of farmers and farmworkers having enough money to spend when they need to do not feature in the free market’s “thinking”.

There are parallels with the provision of so-called environmental goods. Environmentalists have been bleating on for years about how it is difficult to price in the “natural services” that the landscape provides, and this is the founding principle upon which agri-environment schemes are built – rewarding farmers for doing things that previously did not make economic sense but are for the common good.

So here is my bold (and perhaps wiser heads will tell me, foolish) idea. If Brexit happens and the UK takes control of our agricultural policy, let’s have a major rethink of how farming is supported:

I am sure there will be those who will be quick to dismiss this as self-interest. Why should the government intervene further in the supply of food when it is cheaper and more plentiful than ever?

Well, cheap food won’t last forever. Ultimately, it’s a question of when and how we are going to pay for it.