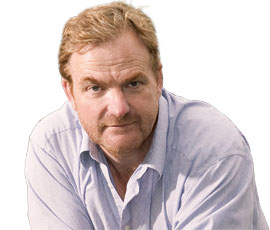 I’m used to angry phone calls. It’s a side effect of having a big mouth and a rare name.

Many years ago I wrote to The Sunday Telegraph suggesting that the BBC might not be giving even coverage to both sides in the Middle East conflict. For a week or two we were bombarded with unpleasant calls at all hours of the day and night.

Letters and articles pointing out the hypocrisy of vegetarianism have the same effect, and after an article in a game-shooting magazine provoked the fruitiest calls, we put “anonymous call block” on the system, which has all but stopped them.

But the past couple of years has seen a resurgence. And they are all strangely similar, usually three words: “Where’s my cheque?” As you can imagine, sometimes an extra word sneaks in before “cheque”.

The answer to this question is always “I don’t know.”

There then follows a scrabbling for the chequebook, and an assurance on our part that the cheque was written and posted on such-and-such a day. In the end, agreement is reached that the cheque has got lost in the post.

It is something that is happening more and more. The lovely Mrs Flindt is in charge of trade stands at the legendary Alresford Show. Every so often batches of several hundred envelopes leave Flindt Towers. Hazel has to be prepared these days for a small but significant percentage of them to simply vanish. But where? How does so much post simply vanish? Is there a vast warehouse tucked away in a hidden valley, stockpiling thousands of tonnes of cards, cheques and dodgy magazines in plain brown envelopes? I’d love to send out a thousand items of post with mini-trackers on to see.

If they got stuck in the back of the post van, someone would surely notice. If they were thrown into the hedges by a surly postie, we farmers would find them. If they were being used for fuel at the sorting offices… you get my drift.

My point is simple: I find it impossible to understand how so many pieces of post can just disappear. They must go somewhere.

However, people are getting less convinced of it as an excuse. The excellent local electrician whose cheque didn’t arrive actually drove out to the farm and turned up on the doorstep, demanding his money. Only after I’d shown him the cheque stub for the original, given him a cup of coffee and set the flatcoat puppy on him for 10 minutes did he calm down, accept our story and cheer up.

As the post becomes more unreliable, people stop using it, and the Post Office’s income will drop and the service will suffer, and so on.

Email is all very well, but there’s still nothing to beat a written piece of paper when it comes to significance and gravitas. It’s tempting to drop a stiffly worded letter to the Post Office telling them to jolly well pull their socks up. Trouble is, they’d probably say they haven’t received it.