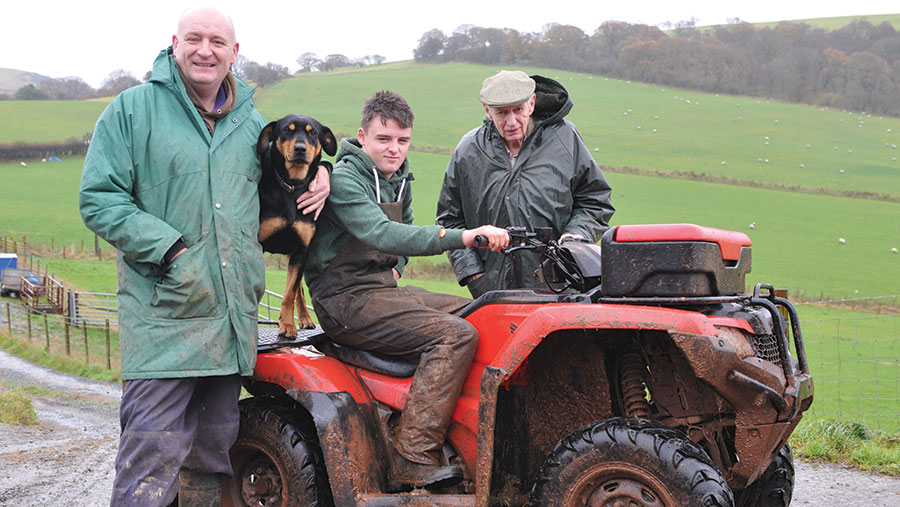 Farming with the family is a situation that can have its challenges but the Davies wouldn’t have it any other way.

W Davies and Son was established in 1930. In the 75 years that have passed since Elwyn Davies left school at 14 to farm full-time, the family has seen agriculture go through profound change.

Those changes have shaped the way they farm Pentre, a hill farm in the hamlet of Merthyr Cynog, near Brecon.

A love of agriculture bridges the generation gap between the three men in the business – Elwyn, his son, John, and grandson, Brychan.

The men have grown up in different times but the bond they share is rooted in their appreciation of the way of life and opportunities agriculture offers.

We find out how their strong work ethic, love of farming and camaraderie have shaped the way they farm.

How did you get into farming?

Elwyn (ED): I was born into it. It was expected that the sons of farmers would farm, that’s how it was in those days.

John (JD): Farming always came before everything else for me, even rolling a field on the night before my O-level maths exams.

Brychan (BD): I have never wanted to do anything other than to farm. When you are growing up, you want to be like thwe people you look up to, and for me those people are my father and grandfather.

What’s the most profound change you’ve seen in your generation?

ED: Mechanisation. We had a team of horses to do all the field work; it would take us a day to plough an acre of land. Mechanisation completely changed that.

JD: Climate change. The weather extremes are greater and more frequent. We never had a problem making small hay bales, we would do that every summer, but the window of opportunity is much narrower.

BD: Data capture and using that to inform our decision making. Our electronic weigh scale makes it quick and easy to assess performance.

What’s been the biggest challenge you’ve had to overcome?

ED: Losing one-third of the herd to brucellosis in the 1970s, although we were fortunate there was a good compensation scheme.

JD: 20 March 1996 is a day I will never forget – hearing the news of a probable link between BSE and new variant CJD. We had just split the family business so that my brothers and I could farm separately and were heavily committed financially.

The EU ban on British beef exports came at a bad time.

BD: The influence of social media on farming. Vegans and other activists are using social media to spread fake news and this is shaping the public’s buying choices.

Is Brexit a good thing for farming?

ED: Just after the referendum, people were talking about the European Union being a failure. I was nine years old in 1939 when we went to war with Germany. We should never forget what true failure looks like.

JD: It is vitally important we get the right deal. If imports are subject to the same high standards as our own, there should be a good future for British agriculture.

BD: I wish I had never heard the word Brexit. As far as opportunities for farming go, it could go either way, it depends on which politician you listen to.

What has been the key piece of farming kit for your generation?

ED: The horse. We had more than 100 horses at one time; not all for working because we used to breed horses to show and sell. Horses were used for everything the tractor does now.

JD: The quad bike. It has been life-changing for an upland farm like ours. I used to check the stock on horseback.

BD: Cell grazing infrastructure. It is allowing us to increase our stocking rate by one-third.

Biggest technology advancement of your generation?

ED: The television. We could learn from the farming programmes that were broadcast and the weather forecast was important, too. Until then, we guessed what the weather might do.

JD: The computer. Learning to “drive”’ the computer is the modern-day equivalent of learning to drive a tractor – both have made the job of farming more efficient.

ED: Winning the male and female championship at the Royal Welsh Show on the same day with Section A ponies in 2006.

JD: In 2012, we hosted the first Royal Welsh Grassland day, which took years to plan. The most memorable thing for me was the way family, friends, neighbours and the community came together in adversity – it was probably one of the wettest June days ever.

BD: Driving a tractor during silage making when I was a boy – I felt like the man then.

BD: A Stabiliser yearling bull, bought this year for £3,500.

What’s the most valuable thing you’ve learned from the generation before you?

ED: My father liked to deal. He would say that if we could sell something for more than we paid for it then we were doing OK.

JD: Stockmanship skills. Dad is an absolutely superb stockman. He knows how to assess and handle an animal. Dad is our go-to when any of us have questions.

BD: Do not skimp on labour. It is better to get a job done well and quickly.

…and the generation after?

JD: I am naturally impatient but Brychan has taught me to have a more measured approach. He considers things more carefully. It can be hard to keep up with new technology, but that is one of Brychan’s strengths.

How have you dealt with succession?

ED: We have five children – one daughter farms with her husband near Talgarth and the other went into teaching – and our three boys wanted to farm, so we grew the business so they could farm in their own right.

JD: Dad has been fantastic in the way he has dealt with succession. He has never been slow to give responsibility.

BD: I became a partner in the business at 18.

What advice would you give to other families about working together?

ED: Make the best use of everyone’s strengths.

JD: To not be afraid to let those around you make mistakes. It is OK to try something and not always get it right.

BD: Look forward, not back. If I want to try something new and it doesn’t work out, Dad doesn’t criticise.

When was the best time for farming?

ED: The 1947 Agriculture Act was a turning point. That really moved the industry forward.

JD: We can all be a bit guilty of looking at the past through rose-tinted spectacles, but for the first time ever I think we have an opportunity to hand over this world to the next generation in better shape.

BD: Right now. It is too easy to get sucked in by negativity but I just see opportunities for food and farming as people change the way they live.

ED: To maintain the happy family environment we have now, where everyone gets on.

JD: To grow the business and to create opportunity, and see that opportunity pass to the next generation.

BD: To fully use our farm’s resources. In Wales, we have fertile land, we can grow grass, we have great soil and access to water.

Pentre Farm now and then