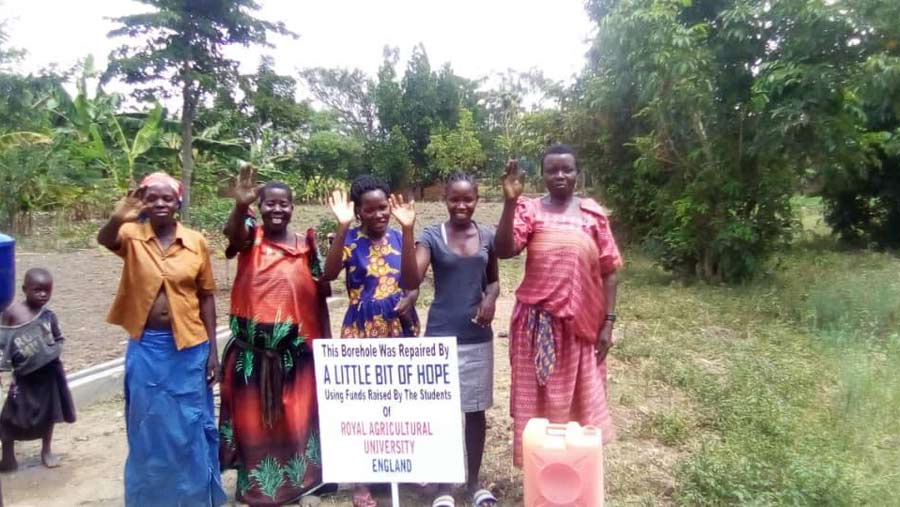 Students at the Royal Agricultural University (RAU) in Gloucestershire have raised £2,922 to help fix boreholes in Uganda and give thousands of people access to safe drinking water.

The money has been donated to the charity A Little Bit of Hope, which helps communities in the Butaleja District in eastern Uganda.

In total, RAU’s Raise and Give (RAG) fundraising activities in February last year raised £8,766, which has been split equally between A Little Bit of Hope, Farming Community Network (FCN) and Little Troopers.

FCN supports farmers and families within the farming community and can be contacted on its helpline: 03000 111 999.

Little Troopers supports children with one or both parents serving in the British Armed Forces.

This was on top of the RAG Rally, where students don fancy dress and drive to a location and stay the night. Bournemouth was last year’s destination and all fundraising was carried out before the coronavirus pandemic.

Phil Green, chair of trustees of A Little Bit of Hope in the UK, said the money from RAU had made a real difference.

“When boreholes break, people often have to walk a mile or more to access safe drinking water. This causes many challenges, so instead some choose to use unsafe water, which causes many more challenges,” Mr Green said.

“The money raised has already enabled us to fix three boreholes ensuring that thousands of people now have easier access to safer water. We would like to express our heartfelt thanks to the student union, as do the people of the villages of Bunghonya, Napekere and Bukede.”