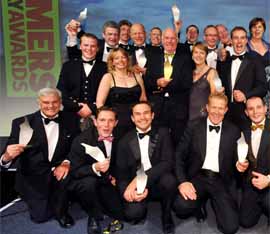 Farmers want to tell their story and promote a positive image of the industry, according to Farmers Weekly‘s 2010 awards winners.

The winners gathered at Warwick Castle last week for a celebration of their achievements and urged other farmers to share the benefits of telling people about what they do.

Elwyn Griffiths, 2010 Poultry Farmer of the Year, said: “Before this award we used to keep our heads down and keep quiet, but we’ve got one hell of a business and we should be proud of that.”

Other winners said they were reticent about entering the awards and opening themselves up for possible inspection. But their opinions had completely changed after going through the judging process, which had given them all new confidence in their businesses.

Alastair Brooks, 2010 Farm Manager of the Year, said: “I wasn’t keen to enter the awards at the start, but I wouldn’t have it any other way now. It’s positive publicity for an industry that is very misunderstood”.

NFU president Peter Kendall said it was vital farmers shared their stories with the wider world to help promote the good work the industry is doing. “We need those farmers with a great story to tell to stick their head above the parapet and talk about the role of farming,” he said.

While consumer support for agriculture was growing, there was still a lot of work farmers could do, he added. “We live in a crowded urban country, so if we want support from the general public, we can’t leave it for someone else to do.”

Louise Walsh, agriculture manager for Morrisons, said the awards also helped farmers learn from each other. “There are so many unsung heroes out there who are doing a fantastic job, and we just don’t hear about them,” she said. “They’ve got so much to offer other farmers.”