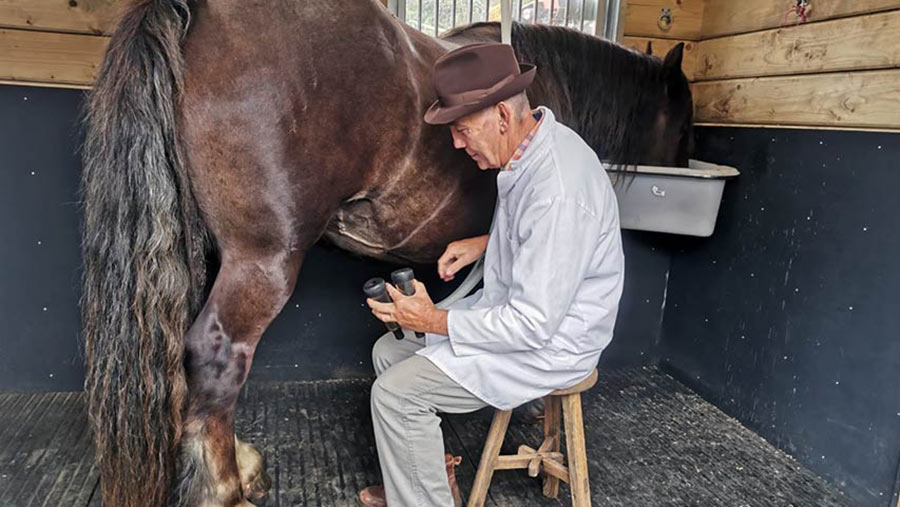 Cows, sheep, goats, and even buffalo – all commonly bred to produce milk for human consumption in the UK.

Now one Somerset farmer says we may soon be adding horses to that list.

Frank Shellard and his family have long been breeding and keeping horses at their farm near Wellow, some five miles south of Bath, where they run a popular livery.

In a bid to kick-start a lifestyle trend, they began milking mares earlier this year. The project is led by Frank, his daughter Alison Smith and her husband Brett.

Watch the video and read the full story below.

Drinking milk from a mare might sound bizarre, but outside of this country it is more popular than you might imagine. According to Frank, 32 million people worldwide drink it.

“It’s common in eastern European countries, Russia and more recently Belgium and the Netherlands,” he explains.

People in central Asia use mare’s milk to make a fermented drink called kumis, which is similar to kefir. They’ve been milking horses for thousands of years.

This white stuff is higher in sugar than that of cattle or goats making it a prime candidate for fermentation, and contains about the same amount of fat as skimmed cow’s milk. 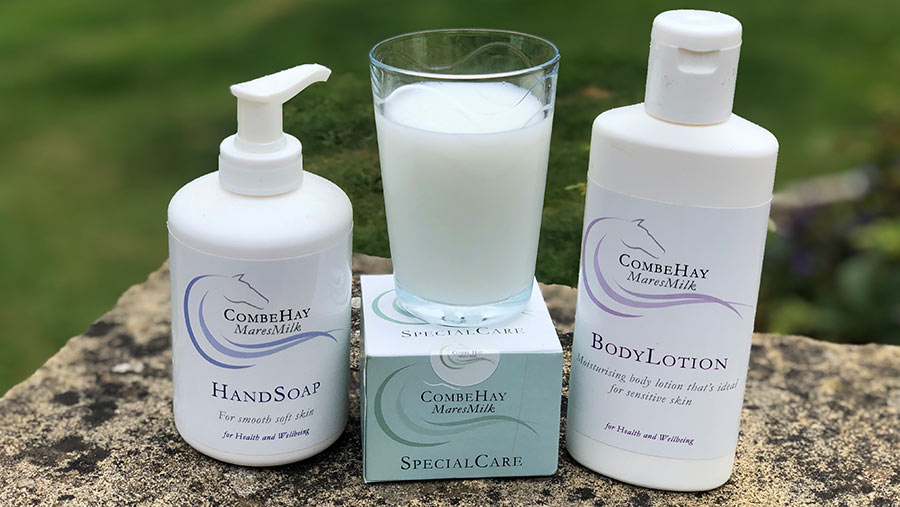 But the real value for Frank and the team is its nutritional and health benefits. This milk can be used to treat common skin complaints such as eczema and gut issues like irritable bowel syndrome.

As such, the family are marketing this white nectar at £24/litre.

Customers champing at the bit to get their health fix can order Combe Hay organic pasteurised mare’s milk bottles online and it’s shipped to them frozen inside a polystyrene package.

And there are consumer customers too, although Frank admits that demand for this slightly sweet and very thin milk is fairly low in the venture’s infancy.

It all started when Frank’s youngest child was suffering from bad eczema. Having tried various treatments, the family found that mare’s milk lotion was an alternative wonder remedy.

“It is supposed to be the closest thing you’ll find to human breast milk, which is why it is so good for you and is much easier to digest compared with cow’s milk,” he says.

Cows, goats and sheep all have four stomachs, whereas horses have a single stomach.

“I’m trying to get back to a very natural system, like when farmers used to milk maybe 10 or 15 cows in the days before big farms took over,” he adds.

Producing and selling mare’s milk direct to the public has long been an ambition of Frank’s.

Aside from the horses, the 300-acre organic farm has 150 Kerry Hill and commercial breeding ewes. Frank also runs a riding school, horse-drawn carriages and outdoor pursuits at the luxurious Soho House rural retreat in the Cotswolds.

See also: So you want to… make and sell ice cream?

Perhaps unsurprisingly for what’s thought to be the first farm in the UK to attempt such a business, there were many obstacles to jump when it came to this latest venture.

After years of visiting contacts in Belgium to discover the knack of milking a mare and carefully researching suitable horse breeds, he finally imported about 15 mares with foals at foot in February. 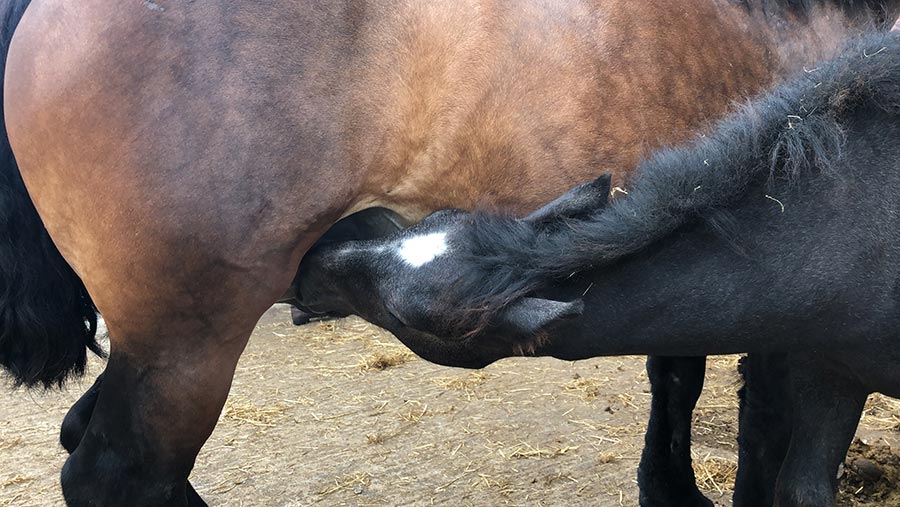 The breed he selected was the Trait du Nord, a type of heavy draft horse which originates from west Belgium and in north-east France.

Their size means they produce more milk than a traditional cob – a popular pet in the UK. However, Frank is now experimenting with putting a cob stallion on his mares to get a bigger horse with the gentler nature of the smaller breed.

“It has taken a long time to get the licensing to do this,” says Frank, recalling the many inspections by vets, the World Horse Welfare Trust and other officials.

The foals are raised as pets to be sold through the family’s livery business.

The mares are milked in a more simple, yet remarkably similar fashion to dairy cows.

Foals are put into a separate pen in the early morning and given dry feed, but the mares can still see and communicate with them at all times.

The team use a mobile milking parlour to draft one at a time. The mare calmly stands unbridled at the feeder while a two-cup milking machine is attached to draw the milk. 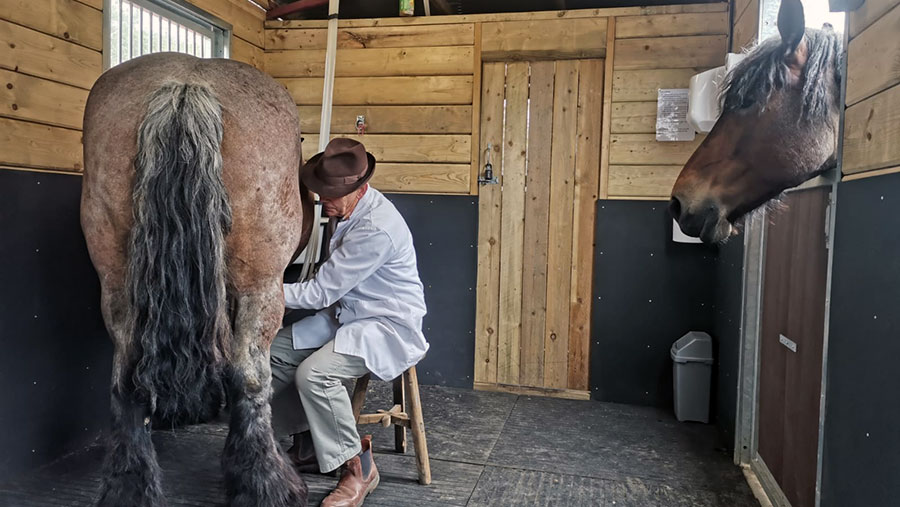 The whole process takes five minutes or so, aided by a gentle hand massage of the udder to stimulate the milk flow as a suckling foal would. Frank says it’s therapeutic for the mares and himself.

They are currently milked twice a day before being reunited with their young until the following morning.

“For the first eight weeks the mare stays with her foal, they aren’t separated until the young one can eat solid feed,” Frank explains.

“Even after that, if you took the foal away completely the mare would dry up because they haven’t been bred to produce milk without young at foot, as dairy cows have.”

See also: Top tips and advice on diversification from farmers

Each mare can produce up to 10 litres of milk each day, if milked three or four times.

Demand isn’t yet at a level where the team at Combe Hay need to be producing more than 100 litres/day so they’re averaging just 1.5 litres a mare, but they are convinced by modest early signs of interest in their novel product.

“Dad wanted to sell unpasteurised milk to keep it as pure and natural as possible,” says daughter Alison, who manages the milking and bottling process.

“But it is less stable unpasteurised, so once defrosted it can have a bitterness which is caused by the enzymes creating lactic acid.”

Once pasteurised on a low heat for half an hour, it is frozen at -22C to keep it stable before being shipped out to customers.

With early quality issues tackled, Frank and family are saddled up to grow their customer base, majoring on the milk’s health benefits and their low-input, organic farming practices.

“My belief is that in the next 15 years, farmers will shift back to smaller, more sustainable agriculture models,” says Frank.

“And horses are far more sustainable than cows. A horse will milk for 25 years, far longer than an average dairy cow.”