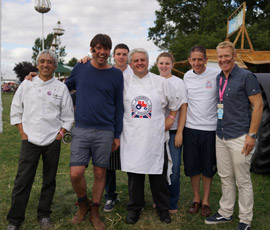 The Red Tractor has launched a fresh bid to encourage shoppers to choose British produced food.

Following a year of food scandals the Trust The Tractor campaign aims to raise awareness of the assurance benefits of Red Tractor branded products.

The campaign is supported by national media advertising and has already had the backing of hundreds of farmers who have erected Trust The Tractor banners across the UK.

Alex James – farmer, food writer and member of Brit-pop group Blur – helped launch the initiative at The Big Feastival event on his farm in Oxfordshire on 31 August.

Mr James said he was delighted to be part of the campaign and urged everyone to get involved.

“Now, more than ever, we want assurance that the food we are buying for our families comes from a reliable and responsible source. The Red Tractor logo gives assurances that a product meets responsible production standards and is traceable back to independently inspected farms.

“It’s food labelling that you can trust. It’s easy to recognise and easy to get involved,” said Mr James.

“It’s food labelling that you can trust. It’s easy to recognise and easy to get involved.”
Alex James

“I think we are more aware than ever that it is important to know where our food is coming from and this does that.”

Another high profile figure at the launch was farmer and Countryfile presenter Adam Henson who praised the campaign.

“You can buy very affordable British food now. If you look for the Red Tractor you know that it has been grown, farmed, packaged and processed in Britain and it hasn’t come from the other side of the world or from Europe.

“I think now people like Alex are getting behind it the general public will get a better understanding of what it is about,” he said.

Mr Henson has also been working closely with the dairy industry in part of a campaign to “Discover Dairy”, through a series of online videos.

“I think the Red Tractor helps support the British dairy farmer and I think if people can buy that and support that they should. Its not expensive and it is available.”

More on the topic

Read the latest news on the horsemeat scandal