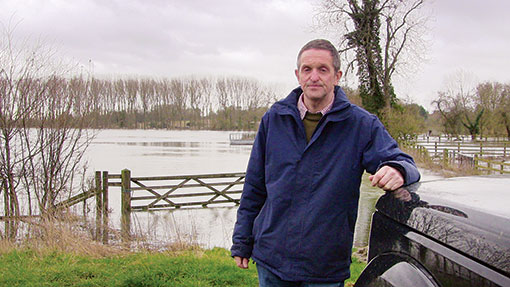 Currently, about 100ha of crops and grassland lie under water at Phillimore Farms, a 1,000ha (2,500-acre) estate in Dunsden Green, south Oxfordshire.

Almost double the amount of average rainfall fell on the estate in December and January – 280mm in total. Another 60mm has been dumped on the farm up to 12 February and forecasters are expecting a month’s worth of rainfall before the end of this weekend.

Mr Beddows, a Farmers Weekly arable Farmer Focus writer , admitted his hopes of a good harvest in 2014 were slowly being washed away.

“We’ve been banging on about dredging the rivers for ages.”
Oxfordshire farmer Simon Beddows

“Last year we lost about 25ha, but this year we are looking at probably 30-40ha because the flooding has been much worse,” he said.

The Thames burst its banks in December and covered many of his fields with water. Some fields are completely flooded and resemble wetlands rather than farmland.

On one field of barley, swans have inhabited a mini lake in the centre and Mr Beddows is concerned that the birds will graze the crop and leave nothing behind once the waters recede.

Last year, he wrote to the Environment Agency and warned them that they were not doing enough river maintenance, which was contributing to the flooding.

In reply, they told him that there was not enough money in their budget to be able to maintain the rivers anymore and any money that was available would be allocated to protecting homes rather than farmland from floods.

“We’ve been banging on about dredging the rivers for ages,” he said.

“There has been no maintenance to any of the rivers, which has caused a lot of the problems.

“The rivers are silting up, which makes it very difficult for us to get the water back off our land. It floods a lot quicker now as well.”

This time around, he feels politicians have been “caught short” by spending cuts and the infrastructure to deal with the water and rivers is no longer there.

“When we get an exceptional weather event like this, we are always going to experience some kind of flooding, which is getting so bad and lasting so long that it’s having a detrimental effect on our business.”