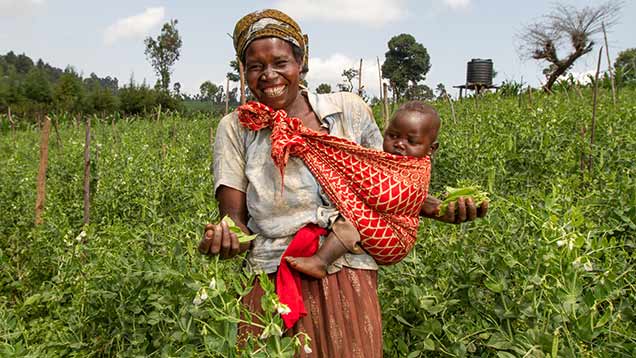 Debbie Beaton talks to Farm Africa about six of the similarities.

More than one billion people in the world are hungry. The challenges of population growth and climate change mean that food production needs to rise by 70% over the next 40 years to meet the demand.

Africa is crucial to this, as it possesses 60% of the world’s uncultivated crop land.

Edgar Kadenge, a Farm Africa project officer from Kenya, says: “Agriculture is agriculture, wherever you go. Having just spent nine weeks in the UK, it’s very encouraging to hear how farmers here and in eastern Africa share the same outlook.

“We all face the same basic challenges, our first and foremost concern being the challenge of increasing production and improving quality.

“The key thing is sustainable agriculture – being able to replicate again and again, producing for a specific market, and environmental management.”

2. Achieving value for money on inputs

While input costs on UK farms continue to climb, focusing attention on getting the best deal, the issues in Africa are more about being able to get access to the right inputs in the first place and using them correctly.

Unlike the UK, drought in Africa doesn’t just hit crop yields, it impacts on life itself. But UK and African farmers are both grappling with ways to manage water more wisely – there just happens to be a lot less of it in Africa.

With families often having less than one hectare, anything that undermines yields means an empty stomach.

Along with encouraging the use of disease-resistant crop seeds, small-scale irrigation is just one of the technologies that Farm Africa works with to help farmers cope with drought.

Capturing rainwater is a critical element of dealing with drought and “zai” pits and ridges are dug to make the most of this precious resource.

Drought-tolerant crops grown from seeds supplied by Farm Africa have doubled yields of sorghum, millet and cowpeas in Kitui, Kenya.

Farm Africa is celebrating 30 years of work. During that time the charity dedicated to fighting hunger has amassed a staff of 300, raised funds, pioneered new farming techniques and trained experts on the ground to deliver sustainable and profitable farming for farmers in Kenya, Tanzania, Ethiopia, Uganda and the Sudan. It has achieved a lasting legacy of:

Maintaining healthy soils is also crucial the world over. In the UK, big machinery creates soil management and structural challenges.

“One tractor here is the size of a whole farm at home!” says Mr Kadenge.

Understanding how to improve, and maintain, soil health is the focus of his farming in Kenya.

“At the moment, tests cost £8-£9, which is very expensive for farmers earning £1/day.

Waste is an important area to focus on, but in the UK the attention is often on it once it leaves the farm, whereas elsewhere it’s at other stages in the chain.

“A big difference in the UK is how little waste there is in the production process,” says David Ogwang, a Farm Africa project co-ordinator in Uganda.

“About 40% of our produce goes to waste in Africa before it gets to market, but once people have bought it, it gets used.

“Here in the UK, it’s the other way round: people waste food after buying it.”

David is envious of the storage capability on UK farms. “When I was growing up, my parents used to have storage facilities to ensure there was always food available.

“This is dying off, the culture of storing food is dwindling. The new generation only knows that food comes from the market. Also, war affected storage in Uganda.”

There’s a lot of attention on the critical role of bees in the UK – and honey is at the heart of helping women in Tanzania become more independent to feed and educate their children.

Nine “queen bees” from the food and farming industry, led by Sainsbury’s Judith Batchelar, have just returned from a gruelling week building 90 beehives for women farmers in Tanzania – and attempting to raise £50,000 for Farm Africa.

Judith Batchelor (left) from Sainsbury’s on a Farm Africa project

Tanzanian women have few opportunities to generate their own income.

The traditional method of harvesting honey is to climb trees where bees naturally build their hives, but for cultural and practical reasons this job that falls to men.

So ground beehives are life-changing for this community of women.

“It’s a win, win, win,” says Judith, because these hives are creating a new income stream, nurturing important crop pollinators and creating a more sustainable way of producing honey because the combs inside are reusable.

6. The growing importance of women in farming

Women have played a crucial supporting role in UK farming businesses for many generations, but it is not until recently that they have become key influencers and business leaders in their own right.

African cultures restrict women from becoming economically independent, but the beehive project is helping to change that.

You can get involved at www.farmafrica.org.uk