ALMOST ONE third more land was available in Great Britain in the first half of this year than in 2004, according to new figures from Savills.

Crispin Holborow, head of rural sales at Savills said: “The majority of regions show a marked increase with only two regions, the north-west and south-east of England, showing a strong decrease in activity.  The south-west showed a small decline.

“There is a clear correlation between the amount of land for sale in the various regions and the price. The east of England shows the largest increase in volume, although still over 25% less than 1998, and as a result land values have only shown a 2% rise.  In the North, however, prices have risen by nearly 15%.

The most marked reduction in land for sale has been in the south-east, which continues to show extremely low trading figures, nearly 60% below the average of 1998 to 2000. 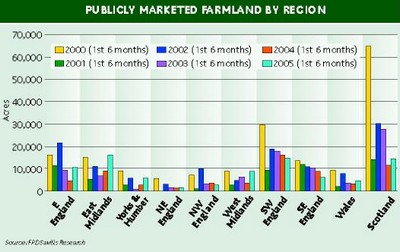