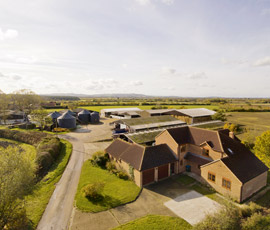 A sizeable mainly arable farm offered on a lock, stock and barrel basis is set to provide a good test of the winter land market in Buckinghamshire.

Tetchwick Farm runs to 520 acres and is situated between Bicester and Aylesbury. Stephen Rutledge of agent Fisher German said the farm offered purchasers a turnkey operation.

“This is an out-and-out commercial farm with all the capital invested in assets that will earn money – mainly level, clay loam land that will grow a good crop of wheat and a superb range of modern farm buildings.

“There is no big period farmhouse tying up money, though the five-bedroom farmhouse is perfectly reasonable for a farm of this size.”

An extensive range of farm machinery to cover virtually all the farm’s operations, including a two-year-old John Deere combine and tractor, as well as 120 sucklers plus followers, would be available to the purchaser for an additional sum, Mr Rutledge said.

“The vendor wants a swift, reliable sale and the farm is priced accordingly.”
Stephen Rutledge

The farm is lotted three ways. The first includes the farmhouse and buildings (one with commercial lets), as well as stables, a manège, 500t of grain storage and 374 acres of land. Most of this is arable (320 acres) with the rest being mainly home paddocks.

This has a guide price of £3.5m, which includes a good shoot and half the shooting rights over a large block of adjacent woodland.

The second lot is 66 acres of permanent pasture with a £425,000 guide price, while a further 81 acres of arable available for £575,000 make up the final lot. Both of these lots are close to the main holding.

“The farm has come to the market unexpectedly,” said Mr Rutledge. “The vendor wants a swift, reliable sale and the farm is priced accordingly.” Bare land values for the main unit and block of pasture equate to £6,500/acre, while the separate arable parcel is priced at £7,100.

Mr Rutledge expected keen interest from nearby farmers, but thought the offering could also tempt rollover money from further afield and non-farming money including investment funds. “It has every chance of going as a whole, which is the vendor’s preferred option.” (Fisher German 01844 212 004)

Keep up with the latest business news