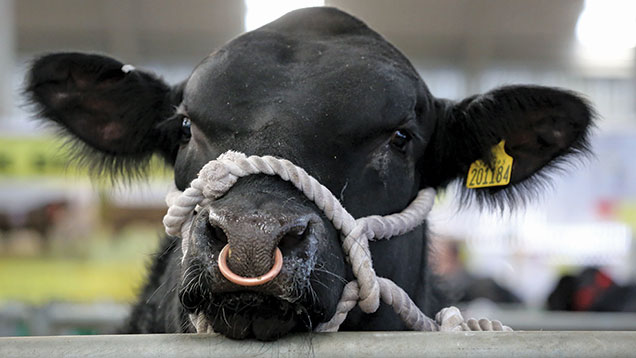 Next month marks the 150th year of the bull sales in Scotland. With many farmers preparing to buy from the Stirling sale and others around the country, Gavin Hill, beef specialist at SAC Consulting, shares top bull buying tips.

1. The bull needs at least two or three months from purchase to adjust and get into condition ready to go out with the females.

2. Take time to see the bull you are looking to buy. Arriving early will allow you to go to where the bulls are brought to be washed to view them. Spend plenty time watching the bulls moving to and from the show ring and then watch them against their contemporaries in the ring.

3. After purchasing, ask the seller, if possible, to give you a bag of the feed or what is left that the bulls are being fed on at the sale. It would be good if this became common practice to have feed available to the buyer.

See also: Keep up with all the news from Stirling Bull Sale

4. Sometimes it is remarked that after a few days the purchased bull seems restless and has temperament issues. Do not suddenly put him on a restricted diet as it is not good to have sudden changes in quantity and type of feed. He needs controlled condition score loss. Feed him reasonably well initially to settle him and then slowly start to reduce the level of concentrates over a period of time. He is not used to just forage. Make sure that not only is the correct energy and protein fed but there are also the right levels of vitamins and minerals.

These bulls are often group housed from weaning and are not used to isolation. Do not simply purchase the bull and then put him in an area where he has little contact or is in a dark, confined pen. Yes, he needs to be quarantined (check what the rules are), but he needs to see movement going on around him as he will have had a lot of close contact prior to sale. Allow him some exercise, which he would have been used to when being reared. If halter trained then it is ideal to continue with this. As soon as he is out of quarantine then close contact with other livestock is advised.

5. It costs a considerable amount to bring a bull out and we hear increasing values often varying from £2,500-4,000, which has also to take into account the cost of insurance with some higher-priced bulls, which the seller may partly cover.

6. With insurance, it is vital that you know exactly what you are covered for.

7. It is recommended prior to the bull being used that he is given a vet pre-breeding examination to check he is physically normal and has adequate semen quality.

8. To avoid injury to the bull when he is put out to work, he should be allowed exercise in a small paddock with some company to get his locomotion and muscles working. It is ideal to keep water and feed apart to encourage the bull to exercise.

9. A number of commercial farmers are now putting bulls in with a group of cows prior to main bulling period to settle them.

10. When serving a young bull for the first time, it should be done under supervision on a non-slip surface. Observe bull closely at start of mating to check for normal service behaviour and absence of any penile injury/lesions – for example, warts.

11. You have got the bull home and then you wonder how many cows should he go to when ready. Well the view seems to vary from 10-20 females for a young bull. The bull is untested so it really is your choice. Monitor returns to service (more than 50% returns suspicious).

See also: Get more tips on buying a bull

12. Don’t get rid of the old bull yet, as the young bull has to prove himself and it is always good to have back-up on farm.

13. Don’t forget parasite control – worm/fluke dose after grazing period as many young bulls will have little or no immunity.

14. After the young bull has been removed from the cows, he should then be put on to a growing ration as he still has significant growth and development to do. Often this is not done and can have an effect on his longevity and capability.