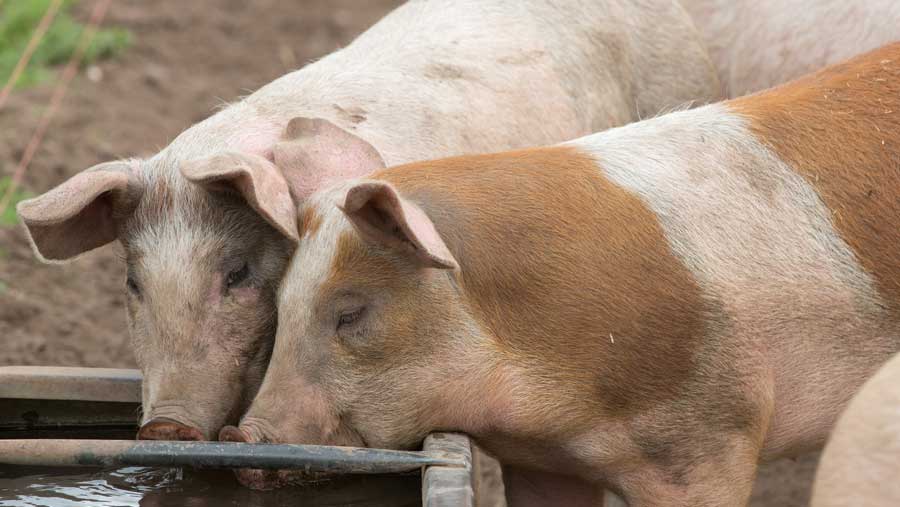 Feed accounts for about 60-70% of the cost of pigmeat production. It is, therefore, important to get the formulations and rations right at each stage of growth.

Feeding diets that are appropriate to each stage of production can help capture gains in performance and efficiency, and this makes all the difference when net margins are tight.

Pig nutritionist Phil Baynes gives his advice on selecting rations that match a pig’s nutrient needs and intakes, from the suckling and newly weaned piglet to the growing and finishing phases.

These targets are subject to variables owing to feeding system, nutrition, environment and health, as well as genetics. Different pig breeds perform differently at different weights, but these weights are a good guide.

Creep feeding is a means of smoothing the transition at weaning with minimal performance checks.

As piglets grow, their demand for nutrients grows and outstrips the capacity of the sow to supply them because her milk yield peaks at about three weeks and then slowly declines.

Creep feed can be introduced from 12 days old.

Presentation to the pig is important for early intake, and feed is best offered on trays on a flat surface or in a specialist bowl, away from the dunging area when sows are feeding, as this is when the pigs will be most active and at their hungriest.

Start with small quantities and replace at least twice daily to keep the feed fresh and palatable. Creep can be offered earlier, but expect intakes to be considerably lower.

The ration at this stage should be energy rich, so combine cooked porridge oats with fishmeal and milk powder to complement the sow’s milk.

Creep feed and starter feeds are highly specialist and contain additives to improve digestion and gut integrity. These include organic acids, essential oils, probiotics and enzymes, for both phosphorous availability and cereal digestion.

Dr Baynes says there are more than 80 different diets being offered for pigs up to 15kg liveweight by potential suppliers – so which to choose?

“Seek the advice of a trusted adviser as nutritional requirements will vary according to genetics, environment and health,’’ he says.

Weaning is the most stressful period in a pig’s life, so alter the diet as gradually as possible because any sudden changes will reduce performance.

Intake in first few days after weaning is key. Offer the same diet as fed pre-weaning for approximately a week or until the animal is about 9kg, as this will keep growth checks to a minimum.

“There are already lots of changes going on for the pig, so using the same creep immediately post-weaning will provide some constancy and the ingredients will help mimic the nutrition the piglet gained at suckling,” Dr Baynes says.

He advises that the ration is revised up to three times over the course of the weaner phase, he says.

“Most producers use two if not three rations from 40kg to 115kg liveweight, tweaking these as the pig’s need for the more expensive components in the ration – the ingredients providing energy and protein – reduces.”

From weaning to 15kg liveweight, the digestible energy (DE) requirement is typically about 16 megajoules (MJ) per kilogramme (kg), reducing to 14.8MJ/kg or lower in the so-called “link diet”, the ration that bridges the specialist starter nutrition to compound or home-mix diets.

This will depend on individual systems, such as the genetic leanness of the breed, environment, feed-consumption patterns and carcass characteristics.

“Immediately post-weaning, pigs need a diet that is very rich in protein and energy. The initial diet should replicate maternal milk as much as possible and typically contains milk powder and fish oil. Therefore, this first phase diet is the most expensive,” says Dr Baynes.

Feeding milk replacer for a short period after weaning can be beneficial to piglet growth and gut health.

Dr Baynes, who refers to oversupply of nutrients during this stage as the “Mars bar effect”, says the density of the total ration must be matched to the capacity of the pig to eat it.

Some pigs have voracious appetites at this stage, depending on genetics and the nutritional capability of that breed, but typically feed a 10-11kg ration from weaning to three-and-a-half weeks post-weaning.

As the pig grows, introduce more raw cereals and vegetable proteins that meet the digestive enzyme development of the pig, while reducing the highly digestible raw material sources such as cooked cereals, fishmeal and milk powders.

“Pigs don’t need as much milk and fishmeal at this stage as we match digestive maturity with diet formulation,” says Dr Baynes.

“Gradually reduce the amount of cooked cereals and replace the fishmeal with vegetable protein.”

As with all stages of production, a lack of proper water intake is the number one limiting factor to feed intake; therefore, a good supply of clean, fresh water is essential.

Focus on increasing intakes at this stage because the nutrient requirements are changing rapidly.

Grower pigs are capable of using higher digestible proteins such as soya, combined with raw cereals, and have a feed conversion efficiency of less than 2:1.

DE requirement at this stage is about 14.2MJ/kg, again depending on the system.

Pigs at this stage of production no longer require complex diets or specialty ingredients, but they do need high levels of protein, found in soya and further balanced with synthetic amino acids such as lysine.

Requirements vary depending on the species and the age of animals. Although high-quality protein contains all the essential amino acids at acceptable levels, poor-quality protein is deficient in one or more.

A typical grower ration includes wheat, barley and high protein soya, and may also include a small amount of rape meal, either home-milled or sourced from a compounder.

As pigs grow, feed intake increases in line with their growth rates.

Feed intakes are likely to be in the region of 1.2kg/day in the grower phase.

Healthy pigs in good environments that are moving into the early finishing stage are entering an unprecedented phase of rapid lean growth.

Total feed requirement is typically 170-180kg in this phase – from 40kg liveweight – with energy requirements at the beginning of this phase around 13.8MJ, decreasing to 13.2MJ at finishing.

The ration can typically include wheat, barley, wheat feed, high-protein soya, rape seed extract and co-products of human food production, such as bakery by-products or even crisps. Other protein sources such as extracted sunflower meal and field beans are also not uncommon.

“Matching the feed to the multitude of farm conditions is essential in getting the most cost-effective performance from the pigs,’’ says Dr Baynes.

“It is easy to oversupply as well as undersupply nutrients – this compromises growth and potential profitability.’’