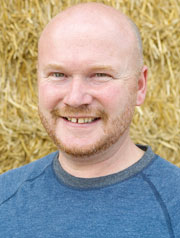 June marks the departure of my pig farm manager, John Dunning, after seven years of loyal service. He leaves the farm considerably more productive than when he started.

For the last three months we have been producing more than 25 pigs a sow. His dedication to the farm was excellent; he even gave up a Valentine’s night to keep an eye on a gilt that was farrowing and trying to savage her piglets. I wish him every success in his new job.

This however gives me a dilemma – John was headhunted by ABN to be their South West feed rep. I always knew he was going to leave some day, as he is a very ambitious young man. Perhaps though, ABN should have at least asked if it was OK to approach him, as at the same time as courting him they were also trying to get my feed business. A small part of me wants to tell them to “go away”, but with only them and BOCM down here I have no one else to compete for my pig food business.

That said, finding a replacement has not been too difficult, which gives a bit of an insight into the state of the industry, as a few units have recently shut down. I have taken on Grant Morrow, former manager of a large unit in Scotland, which is ceasing production. Thank you for choosing us and good luck.

• More from Andrew Freemantle and other farmer Focus writers