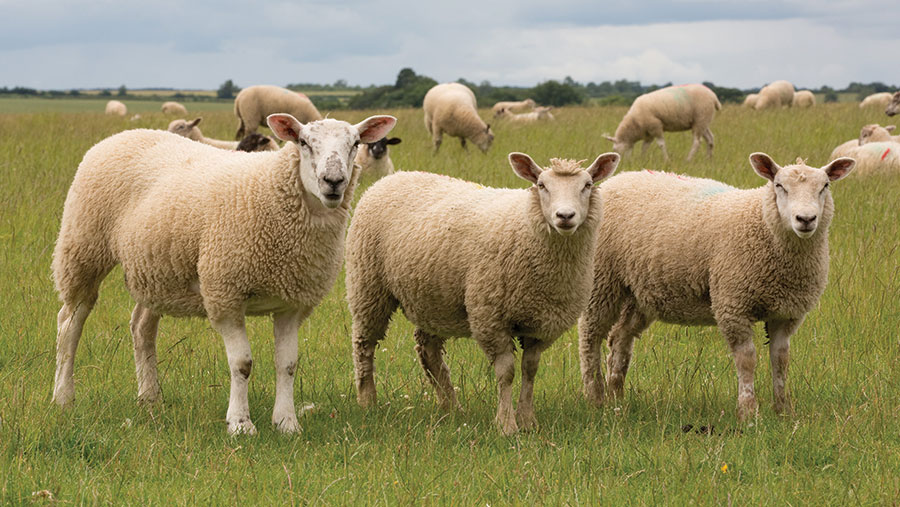 Lamb producers can hit lamb weights by putting strategies in place which can be measured at eight weeks.

If a lamb weighing 4.5kg at birth achieves a target weight of 20kg at eight weeks, it is very likely to achieve 38kg at 20 weeks, says Ms Wright.

1. Maintain the correct ewe BCS throughout the year

Lamb performance is directly linked to the body condition score (BCS) of ewes, but don’t leave it until a ewe is in-lamb before starting this process – start pre-tupping.

“It is much harder to influence the condition score of a ewe when she is in-lamb, because if you need to take action to increase or reduce her weight, her lambs will be affected,” warns Ms Wright.

Lambs produced by a ewe at BCS 2.5 or less are likely to be light, she adds.

At tupping, aim for BCS 3-3.5 for lowland ewes and 3 for upland breeds.

Body condition score ewes at weaning and allocate grazing according to the score with leaner ewes getting the best grazing.

This can be done by handling them in the lumbar region, immediately behind the last rib.

The amount of eye muscle and degree of fat cover over the spinous and transverse processes should be assessed.

If you have a ewe at BCS 2 and need to increase that to 3.5, it means she needs to put on 13kg – an additional 10 megajoules (MJ) a day above maintenance requirements for 10 weeks, which is almost the same as a pre-lambing diet.

If a ewe has a poor BCS, she will not produce enough milk and this will result in lambs sucking hard and vigorously, leading to damaged teats.

One major indirect cost of mastitis is the impact it has on the growth rates of suckling lambs, due to lower milk yield and quality.

It is also possible that damaged or misshapen udders or teats make it more difficult for lambs to suckle or latch on efficiently.

Focusing on hygiene and nutrition is critical to prevent mastitis.

The risk of developing mastitis increases the longer ewes and lambs stay indoors, so turn out as soon as weather and grass growth permits.

It is beneficial to leave ewes and lambs in the same area, before, during and after lambing, so they are not challenged by unfamiliar bacteria that cause mastitis.

If orf is present in the flock, damage caused to the ewes’ teats allows mastitis pathogens to gain entry.

Manage orf by clearing or not grazing rough pastures with ewes or lambs.

Use of salt licks can help, or discuss with your vet if vaccination is a suitable option for your farm.

“After a reduction in the ewe’s appetite during late pregnancy, caused by growing lambs putting pressure on the rumen, her appetite increases by about 50% after lambing,” she says.

Ewes with access to a grass sward at a height of less than 3cm will require extra forage – with 0.5kg of high-quality forage (12+MJ of metabolisable energy) recommended for every lamb reared if grazing grass is 3-4cm.

Good-quality grazing will make lambs more resilient to worms as the season progresses.

Nematodirus – a serious and nasty parasite in lambs – is the first worm to be aware of in the spring.

Infection rates vary from year-to-year and by region, so check the Sustainable Control of Parasites in Sheep (Scops) website for the status in your area.

5. Manage shearlings in a separate group

The first lactation is always the most limiting, says Ms Wright.

“As ewes get older and have more lambs, they produce heavier lambs.”

Look after your shearlings, especially those rearing two lambs – consider running them as a separate management group.

“Farmers do this with ewe lambs, so why not shearlings,” says Ms Wright.

“By doing this, they can have preferential treatment, either better-quality grazing or creep feeding lambs, depending on the system.”

6. Monitor feed intakes and wean lambs when growth drops off

From eight weeks old, a lamb’s energy intake is greater from grass than from milk, so competition for high-quality grazing between ewes and lambs reaches a critical point.

The time period when this happens will change each year according to grazing management and grass growth.

If grass is growing well and ewes are in good condition, weaning can be delayed without reducing lamb liveweight gain.

However, if forage availability is low, lamb growth rates will suffer, as ewes and lambs compete for the same grass.

If lamb growth rates are lower than 200g/day, this should trigger weaning and lambs should be moved on to better-quality forage.

Look out for red and swollen skin and a thin layer of white discharge between the claws.

“They need to stand in that solution for 20 minutes. It is time consuming, but if it isn’t done correctly, it won’t be effective.”