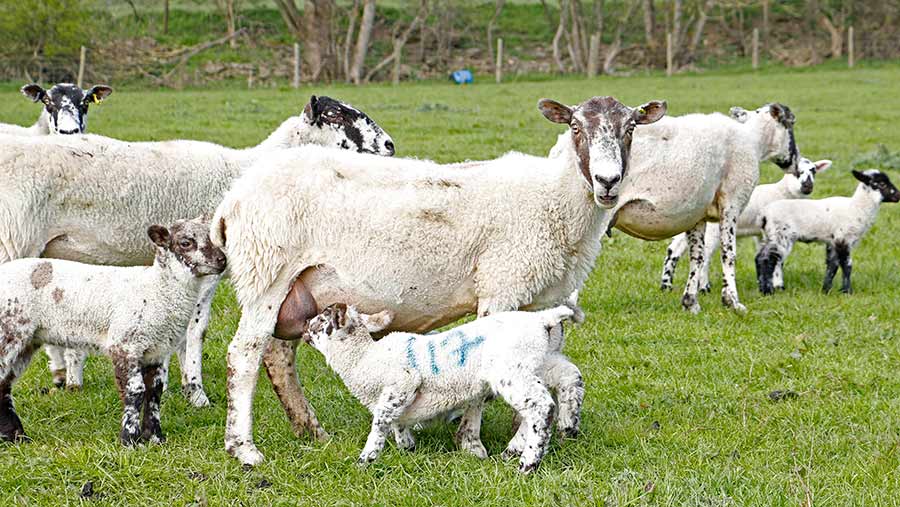 Despite having higher feed costs than grass-based sheep systems, Mr Harrison’s attention to detail is delivering 1.8 lambs sold per ewe, which in turn is bringing returns of £150 a ewe.

Replacement ewes are sourced at six months of age from a single, known farm in Wensleydale, Yorkshire.

On arrival, lambs receive a broad-spectrum wormer and fluke treatment and will start a vaccine programme for pasteurella, clostridial disease and enzootic abortion.

Sufftex rams are used at a high ram-to-ewe ratio of about 1:40 for six weeks, with the raddle changed weekly for the first three weeks to allow Mr Harrison to group ewes accordingly at lambing.

“On the third week I put a red on to show any returns because we get very few anyway.”

Ewes are housed at Christmas after scanning and are winter shorn. They are then grouped into singles, twins and triplets according to body condition and lambing date.

“Winter shearing is much better for them because they are inside and it’s warmer, and they eat more and you can monitor condition better. But if a ewe is lean we won’t shear her because she’ll get cold. There were 20 we didn’t shear this year.”

Ewes are fed straw and nuts on the floor inside pens and they forage in the straw bedding to find it.

Not only does this avoid ewes pushing at the feed fence, but you would struggle to find a single nut wasted, Mr Harrison says. 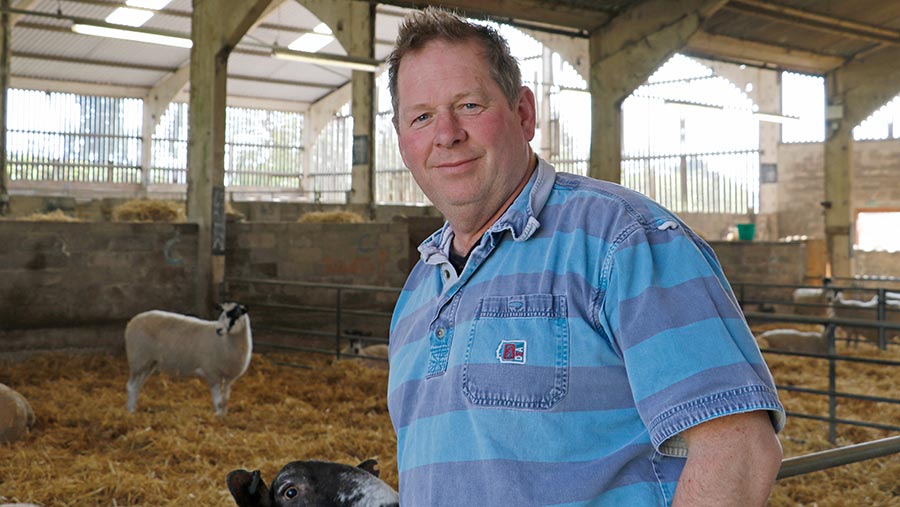 Straw is used from the arable enterprise and is a cost-effective alternative to making silage bales, which is why the farm switched to feeding straw many years ago.

The team beds up after feeding nuts, with ewes receiving 1.5-2kg of straw a head, with about 50% wasted as bedding.

“The beauty of that is they are always lambing into a clean environment.”

Initially nuts are fed at a flat rate of 0.75kg in two feeds and this is stepped up to 1kg a head a day three weeks before lambing, depending on body condition.

“It puts condition on the ewes early because on a straw-fed system they can melt away quite quickly near lambing. You have more chance of trying to put condition on them early rather than try and chase it nearer lambing,” says Mr Harrison, who targets a body condition score of 2.5 at lambing.

Mr Harrison puts achieving 1.8 lambs per ewe sold down to his focus on ewe condition and says creep feeding lambs allows him to wean early and get ewes back in condition ahead of tupping, with lambs typically weaned at 10-12 weeks.

A compact lambing period sees ewes lamb over three weeks from the second week of March.

The higher-cost system is reliant on having a high number of lambs to sell so attention to detail at lambing is imperative.

Mr Harrison is a one-man band for most of the year, with staff brought in to help at lambing. Farming on the urban fringe between Bristol and Bath means finding good staff can be quite difficult, so lambing was pushed back by one week this year to accommodate veterinary students outside of term time.

Five staff members will cover the busiest period, with raddles used at mating to gauge which weeks this will be, and the team is allocated day and night shifts.

With scanning results averaging 200% overall, triplets are inevitable, and every care is taken to adopt these lambs on to singles where possible, with remaining lambs put on to an automatic milk feeder.

“We use a big plastic bucket and we lamb the ewe into it and catch all the fluid inside,” he explains. This allows surplus lambs to be wet-adopted on to single ewes. 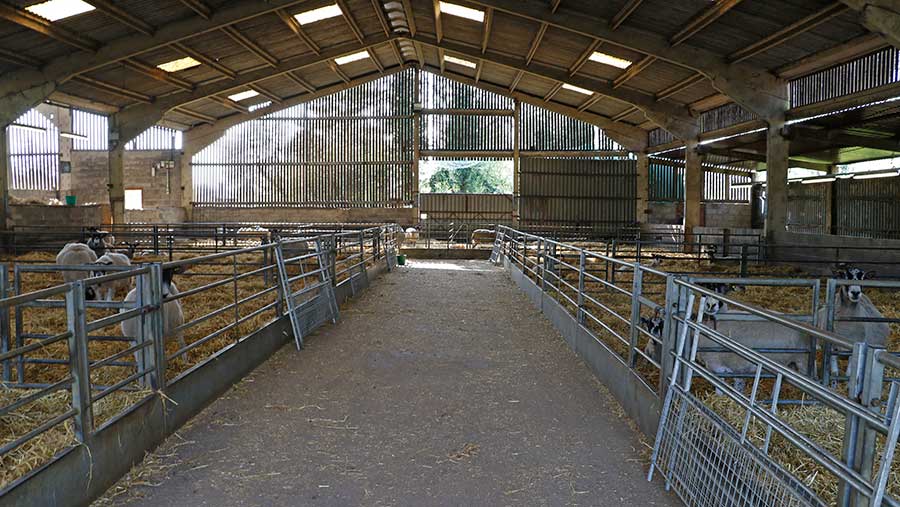 “Two minutes can save a ewe going in a crate. I hate crates,” he says.

“When they are lambing, we will wait and then put a couple of gates around them to stop mis-mothering. Once she’s had her last lamb they will get moved into an individual pen.”

Generally, assistance is kept to a minimum, especially with shearlings which can naturally be more nervous.

Once penned up, a refractometer is used to check the ewe’s colostrum quality and if it’s not over 22% on the Brix scale lambs will be given an antibiotic drench as a precaution.

“We are just treating the ones that are high-risk. We’re not eliminating antibiotic use completely but we are using less.”

EID is used for monitoring lamb growth rates and medicine use, but a simple spray marker system is used to identify ewes not to breed from.

“If a ewe has a prolapse, ring womb or big teats they get a big red cross on their backside and they are culled.”

Ewes are generally turned out to grass with lambs at foot 24 hours after lambing and set stocked in smaller groups of up to 130.

“In the past we have done resistance testing and found mild resistance to white and clear wormers so that only leaves us with yellow wormers, but they have a longer withdrawal period of 21 days so you have to be careful once you start drawing and we have to choose from the remaining wormers wisely.”

Once at grass, lambs are fed 18% crude protein creep in hoppers from two weeks of age onwards.

Creep feeding is necessary to counter the farm’s poor grass growth, with most of the ground south-facing, which means it is prone to burning off in the summer, Mr Harrison explains.

“We are trying to get a lowland performance out of an upland farm. It’s almost a mini bit of Wales but in Somerset.

“Rotational grazing doesn’t fit our system. I’ve been here 19 years now and I know what works. We tried not creep feeding and had all store lambs at the end of it.”

Lambs are weaned at about 12 weeks and weigh 37kg on average, with all lambs sold direct to Randall Parker weighing 20.5kg deadweight at R3L/R3H.

“I am aware of our reliance on feed and rising input costs but you have to make the most of what you have got to work with and be as efficient as possible,” Mr Harrison says. “If you are on a farm with good grass growing conditions and good pastures with breeds that can convert that grass well, then grazing systems are ideal.”

Mr Harrison says he would love to be able to reduce the flock’s feed costs without affecting performance, but he doesn’t see how this would be possible without losing arable income to make way for forage crops or drastically reducing ewe numbers by relying solely on a grass-fed system on permanent pasture.

“The whole low-input low-output versus high-input high-output debate is always an interesting conversation with other sheep farmers. We all do what we think is best for our flocks and businesses.

“We have to maximise our output on what we have.

“Our system can come with high costs, it can have high risks such as the volatility of lamb prices but when it comes right it works well. We are achieving a lowland flock performance on a hill farm.”