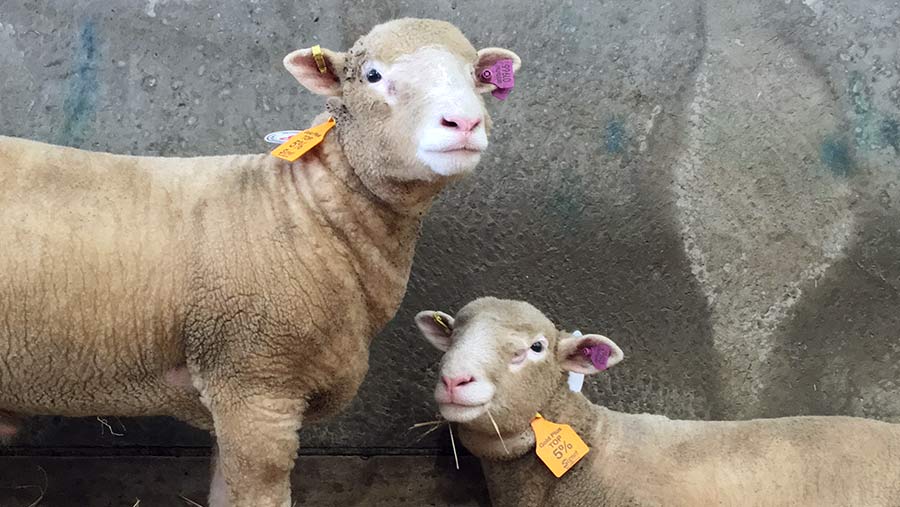 When Andrew and Jan Walton present their latest crop of performance-recorded Charollais rams and ewes for sale this month, there will be no mistaking those with the highest genetic merit.

The couple, who record their flock with Signet Breeding Services and use its point of sale identifiers, will use neck tags in the new “gold-plus” category on four rams in the top 5% of their breed index.

This is one step up from the gold identifier that distinguishes the top 10% and has been created by the AHDB to allow potential buyers to spot rams with exceptional genetics.

The Waltons say the identifiers are useful for both on-farm and off-farm sales.

“If we put an identifier around a sheep’s neck, buyers can more easily select the ones they want, whether they are the top rams or not,” says Mr Walton, who farms 40ha at Church Farm, Backford, Cheshire.

High-index rams command a financial premium for the business. This is calculated using a price formula based on the ram’s index figure, which is then multiplied by a factor of 1.5.

The Rainbow flock consists of 150 pedigree Charollais ewes and the Waltons run another 150 commercial ewes. Two-thirds are artificially inseminated to lamb in the first week in December and anything that fails to hold to service is inseminated with the remaining one-third to lamb in February.

Lambing is in two very compact stages because both Mr and Mrs Walton have off-farm jobs and they take two weeks’ annual leave to cover those two periods, lambing indoors.

Rams with high muscle EBVs are used across both flocks, incorporating genetics from their own top 5% rams and sourced from other breeders. They aim to rear 280 lambs from the pedigree flock and have a strict selection policy. Up to 30 ram lambs and 30 ewe lambs are retained as flock replacements.

A batch of 20 high-index ewe lambs are also retained to be sold at an annual sale – “Charollais Females with Figures” – which the Waltons were instrumental in setting up with fellow performance-recorded breeders Mark and Margie Rushbrooke.

Seek out the standard classifications

Gold plus, gold and silver identifiers classify animals in the top 5%, 10% and 25% of their breed, based on index. The identifiers are part of Signet’s “Seek out the Standard” campaign, which encourages breeders to “seek, check and review” rams before buying.

Buyers can use the identifiers to spot rams with superior genetics before checking the ear tag identity and reviewing the animal’s EBVs with the breeder. The identifiers are supplied at no additional cost to Signet clients.

Rams are not only selected on their index, but also on mobility and functionality to suit commercial customers.The commercial flock is also performance-recorded and ultrasound-scanned so that the highest-performing individuals can be retained.

A focus on genetic improvement is beneficial for the Waltons and their customers.

“Because of the accuracy of data, we have customers who would previously have been lambing in February to sell in May and June, now lambing in March and selling in the same period,” says Mr Walton. 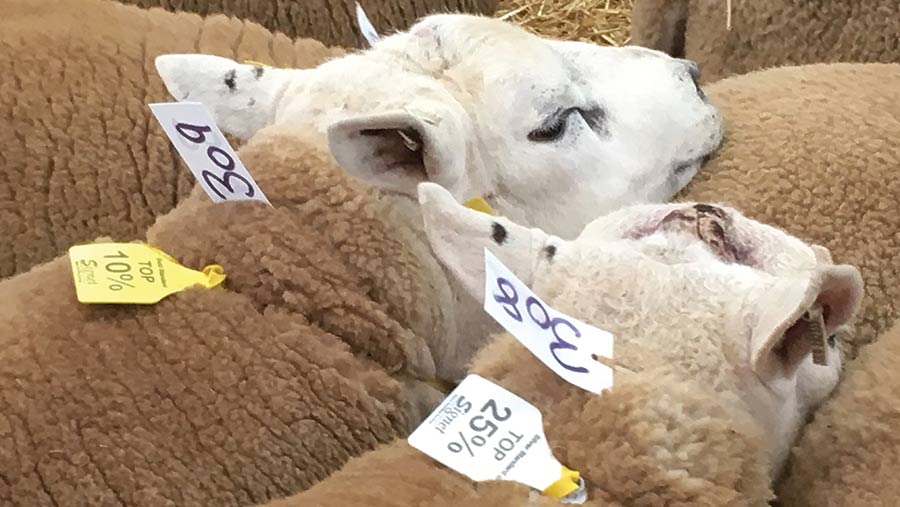 Computed tomography (CT) scanning has also allowed flock improvement. In the past 12 years, 168 rams and five ewe lambs have been scanned.

“There is definitely a premium associated with having CT muscularity in the top 5%,” says Mr Walton.But he describes it as a “slow burner”.

“Customers are now coming on board, but it doesn’t help that there is an emphasis by breed societies on supporting sheep for the show ring rather than assisting members with performance recording.

“Everyone likes to win a local show, but it is important that breeding decisions are based on accurate figures rather than unsubstantiated emotion.

“As pedigree breeders, we need to think about being commercial lamb producers first and foremost and keeping the best of the breed.”

Mr Walton says EBVs are a hugely important currency in his ram sales and in marketing females with high genetic merit to other breeders.

Although he has spent the past 25 years working in the meat industry and has a masters degree in meat science, Mr Walton is a first-generation farmer and EBVs have helped convince his buyers that he is credible.

“I was not born in Cheshire. I have no locality and history, so needed a way of marketing our stock. Jan and I came into the area as unknowns, so using EBVs gives the right context to our business – people understand we know what we are talking about.”

Charollais is their breed of choice because it is fast-growing. By using rams with high growth EBVs, the first animals are sold at Beeston Castle market and local hotels in the first week of March for Mothering Sunday and Easter menus.

As well as selling to the live market, a proportion are sold deadweight to allow the Waltons to keep tabs on confirmation and fat classification.

“Eighty-eight percent of the pure-bred Charollais lambs achieve U-grades or better for conformation and a fat classification of 3L or 2,” Mr Walton reports.

Home-produced forage is at the heart of the system – barley to feed as wholecrop silage is grown on a neighbouring farm to reduce the amount of concentrates fed; only triplet-bearing ewes receive supplementary feed.