A strong emphasis is also emerging within the rankings on low maintenance costs and longer lifespans.

Regaining the number one position with a PLI of £645 is Kings-Ransom Erdman. This Planet son now scores an outstanding +0.9 for lifespan, equivalent to an extra nine months of productive life.

He also shares the strongest maintenance score in the top 20 of -22.

A daughter of Erdman © Sarah Damrow

A new entry in second place is the all-rounder Shamrock son Lepacha Loberry. He confirms his earlier genomic predictions with a PLI of £618, and transmits a nice balance of production and fitness traits with a strong maintenance score of -17.

Former number one sire Gen-I-Beq Lavaman moves to third place. With 531 UK daughters contributing to his production proof, he is the highest-ranked sire for reliability.

He transmits high milk quality (+0.14% for both fat and protein) and has the best TB Advantage score in the top 20, meaning about 2.8% fewer of his daughters are predicted to become infected during a TB outbreak.

High protein at +24.2kg and +0.10% help Delta G-Force to number five in the rankings. Holding his position at number six is United-Pride Erdman Evan, a son of the top sire Erdman, who matches his sire’s excellent maintenance score of -22.

Co-op Robust Cabriolet climbs to seventh with high fat (+0.19%) and excellent direct and maternal calving ease scores at +1.4 and +3.2 respectively.

This Robust son ranks just ahead of his paternal half-brother and superb daughter-fertility Index transmitter (+14.5) De-Su Ransom, in eighth.

Commenting on the genetic trends among the Holstein bulls, Marco Winters, head of animal genetics for AHDB Dairy, says: “The strengthening in fat kg, fat and protein percentage scores within the top 10 bulls show the response to the changing milk contracts and will afford plenty of choice to farmers aiming for these traits.”

A new number one and seven new entries see a complete reshuffle in the genomic rankings.

Straight in at number one and making his debut is Progenesis Unicorn, with the highest-ever PLI score of £728. An AltaSpring son from a Tango dam, Unicorn excels in daughter fertility index (+14.5) and SCC (-27).

Second in the rankings – just one PLI point behind at £727 – is DG Charley, the first in a list of long-awaited Cogent Supershot sons to make their appearance. Out of a Mogul dam, Charley combines high production potential (1,023kg milk, +29.9kg protein) with a strong lifespan score (+0.7).

S-S-I 1stClass Flagship, an Alta1stClass-bred bull from a Supersire dam, now ranks third, with a PLI of £725 and the second-highest Type Merit in the top 20 at +3.16. He is beaten on Type by only another Alta1stClass son, Silverridge V Allclass, in 11th position, who scores +4.24.

New in eighth, with a strong score for reducing maintenance feed cost (-3) is Mr Pre Director (Predestine x Robust) with a PLI of £697. Two more Supershot sons take ninth and tenth in the rankings: Peak AltaTrueshot (£694 PLI) from a McCutchen dam, and Co-op Aardema Black Jack (£687 PLI) out of a Numero Uno.

Spring calving bulls have little change on the April rankings, with the top three bulls retaining their positions.

Holding on to first place with SCI of £452 is VJ Tester, a Jersey excelling in transmitting high fat and protein to his daughters while combining very good fitness traits with low maintenance.

Remaining in second is another Jersey sire, VJ Link (£446 SCI), who transmits a high lifespan score of +0.7.

Link is followed by British Friesian sire Catlane Caleb (£414 SCI) who has the best daughter fertility index in the top 20 at +15.1.

Moving up to fourth is the number one Holstein sire in the August 2016 PLI rankings, Kings-Ransom Erdman.

Producing daughters that are much smaller than the average Holstein, he combines high production potential with the best daughter lifespan score in the SCI top 20 at +0.8.

Completing the top five is Jersey sire VJ Hilario, who has moved up from seventh with an SCI of £395. He transmits good protein and excellent fitness traits (-47 maintenance, 0.6 lifespan, -11 SCC, 13.7 fertility index).

There is also little change in dairy breeds other than Holstein, with British Friesians and Jerseys seeing the emergence of just two new entrants each.

Unchanged in the top spot for British Friesians is Catlane Chad, with a PLI of £454. Chad has increased his PLI score by £44 since April’s rankings were published, and combines good production with strong components, showing +20.2kg fat, +15.0kg protein, +0.15% fat and +0.10% protein. His fitness scores are favourable, with a lifespan of +0.3 and a fertility index of +3.0. He also has good direct calving ease at +2.2. 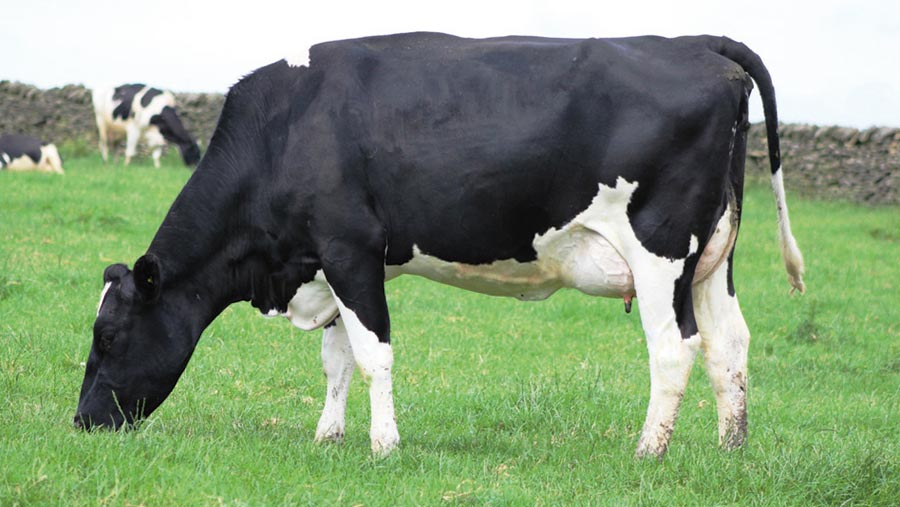 A daughter of Catlane Chad

New genomic evaluations for young British Friesian bulls see the first top genomic young sire announced as Goonhilly Joseph. Joseph, born in September 2015, a son of the top proven bull Catlane Chad and out of an EX92 Hylke dam, has a PLI of £349.

This announcement marks a new era in genomics for other breeds, with British Friesians the first to benefit and Ayrshire, Guernsey and Jersey genomic evaluations likely to follow in the December release.

The top rankings remain unchanged with VJ Link, PLI of £536 and also the second-ranked SCI bull, retaining number one. 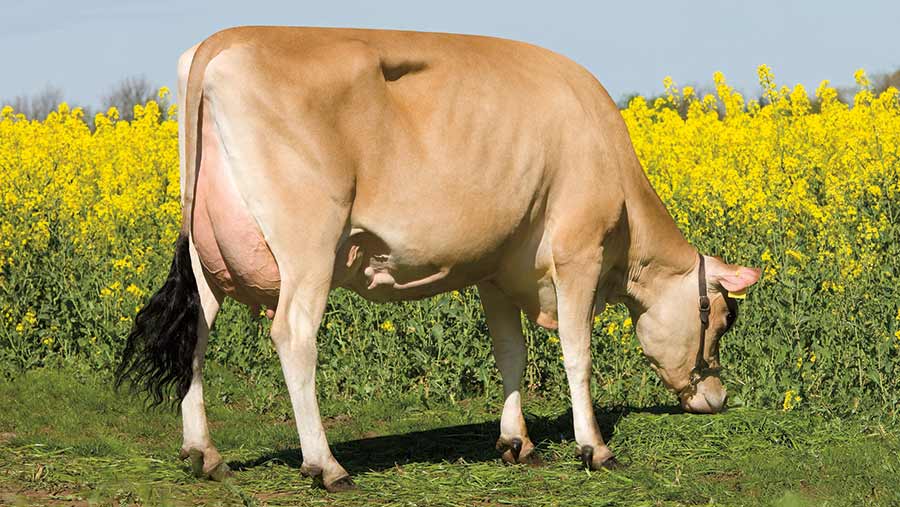 A new entry in the third position is VJ Zummit with a PLI of £399. A DJ Zuma son, Zummit has great production in solids but more especially in fat and protein percentages.

Climbing from third to the top position is VR Gunnarstorp Back Gobel, with a PLI of £556. He has the best fertility index (+15.1) and lifespan (+0.7) in the top five Ayrshires, alongside solid production figures.

He overtakes his sire and previous top Ayrshire Gunnarstorp, which with a PLI of £489 and scoring -10 on SCC, +0.5 on lifespan and +10.0 on fertility index, remains a good all-rounder. Gunnarstorp remains particularly strong on type, showing +1.2 for legs, +1.0 for udder and +2.1 for Type Merit.

Down one to third is Pell Pers, with PLI of £455. He combines good production solids with strong lifespan and fertility index scores, and a very good SCC rating of -16.

Unchanged in fourth is VR Tuomi, with a PLI of £391 combining the best solids and percentage improvements in the top five Ayrshire at +21.2kg fat, +17.9kg protein, +0.03% fat and +0.04% protein alongside the best SCC score at -20. British-bred West Mossgiel Modern Reality follows in fifth, with a PLI of £380 and good all-round fitness and type traits (+2.1 Type Merit).