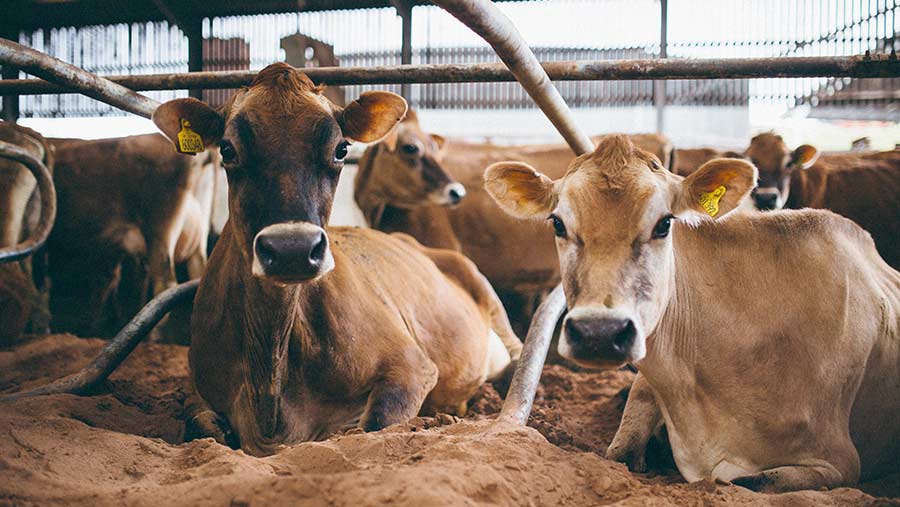 While many farmers perceive milk price volatility as a growing threat to their business, Lancashire entrepreneur Joe Towers saw it as an chance to save his family’s struggling dairy farm.

When the dairy crisis hit in 2015, with global supply going into overload, it rocked the family’s direct milk supply business, Lune Valley Dairy.

But an opportunity came along via a pop-up coffee business, which asked him to supply “barista” milk to artisan coffee houses in London.

Joe, who had worked for a coffee exporter during his placement year, jumped at the chance.

“I was really wondering if we were in a position to carry on farming and was considering moving to a lower-cost production system,” says Joe, who at that time had only recently returned home to farm alongside his parents John and April and brother Edward at Brades Farm, North Lancashire.

By chance he was contacted by coffee guru Shaun Young, who ran Noble Espresso – a pop up coffee shop business.

He wanted to fill a niche gap in the market by supplying the UK’s first-ever barista milk for artisan London coffee houses.

“Unbeknown to me at the time, Shaun had already spent a few months trying to get farmers to engage with his concept but no one thought it was a good idea because he had no existing sales,” says Joe.

Joe had coincidentally worked in Kenya and Tanzania for a coffee exporter during his placement year when studying agri-food marketing at Harper and found the idea hugely exciting.

“My gut feeling was that it could work. I worked out we would need to sell 7,000 litres in the first week and we would have to do that from day one.”

So he decided to take a gamble.

Research from Copenhagen showed protein needed to consistently hit 3.6% to make it perfect for frothing, but at the time the herd of 330 Holstein Friesians was averaging only 3.1%.

“You can play around with feed to a degree but if you really want to make a significant difference you to change the genetics,” explains Joe.

As a result, the family decided to invest in a completely new herd and purchased 70 in-calf Jerseys from Denmark.

Buying abroad afforded them the opportunity to capitalise on the favourable exchange rate, but Joe says the global milk crisis actually brought opportunities too.

It meant the family was able to source all the cows from one herd dispersal, which lowered bio-security risks, and Joe says it was easy to convince the family to take a leap of faith.

“Selling it to my family if we weren’t in the dairy crisis would have been impossible,” says Joe, who adds that market volatility was actually a key factor in the new enterprises’ success.

Within two to three weeks sales hit 7,000 litres and since then business has boomed.

“We have been absolutely blown away by the demand for this product. We have had 350 enquiries from outside London and inside London we are at capacity. We are having to turn away coffee shop owners on a daily basis.”

They are now supplying 35,000 litres of milk a week into London coffee houses and also sell a further 22,000 litres direct off farm through their own branded milk business, Lune Valley Dairy.

The Jersey herd has since expanded to 150 and is run separately to the farm’s existing herd of 330 Holstein Friesians to enable Joe’s brother Edward to better control milk quality.

All cows are currently housed year-round on sand in cubicles. Alongside a TMR the Jerseys are fed concentrate out of parlour feeders to maintain high levels of protein and butterfat.

“They are fed according to their stage in lactation and yield,” explains Edward, who says each animal has a pedometer which detects heat.

“Each pedometer has an individual cow number linked back to a computer, which enables feed to be allocated on an individual basis.

However, the farm is in the process of building a bridge across a small river to give cows free access to pasture from next spring.

“A gate will be left open and the cows will then have the freedom to choose if they wish to go outside and graze.

“The ‘freedom to choose’ is absolutely critical to the brand in the long term,” explains Joe.

There is an exact science to ensuring the milk hits consistent protein levels of 3.6% each day.

Joe uses an Excel spreadsheet to calculate how much milk is required from two tanks to hit their constituents target.

Black-and-white and Jersey milk is then blended together to create the optimum creamy consistency needed for frothing.

The Barista milk is picked up by Dales Dairies, Grassington, Yorkshire, for processing before being delivered direct to London.

Joe says one of the biggest selling points is its traceability back to his farm.

While surging product demand means there is an opportunity to grow the business, Joe says at this stage they would rather consolidate.

“I’m not saying we will not grow in the future but we are still firming up what our strategy is and we want to consolidate for a while.

“Generally in business everyone assumes they have to grow but you can stay small and just be really good.”

Joe believes innovation is key to the survival of the dairy industry. However, he says first the industry must try to change the way in which its customers value milk.

“I think people in coffee historically viewed milk as a commodity – other than an enlightened few – but we are working to change that perception more generally and that is rapidly happening.

“The dairy industry is stuck in a rut thinking that milk is a commodity and you can’t add value. If you don’t view at your product as anything but a commodity, you’re never going to add value.

“The people throughout the industry (farmer and up the chain) who survive in the long run will be the ones who learn to look at volatility in a different way, even embrace it.”