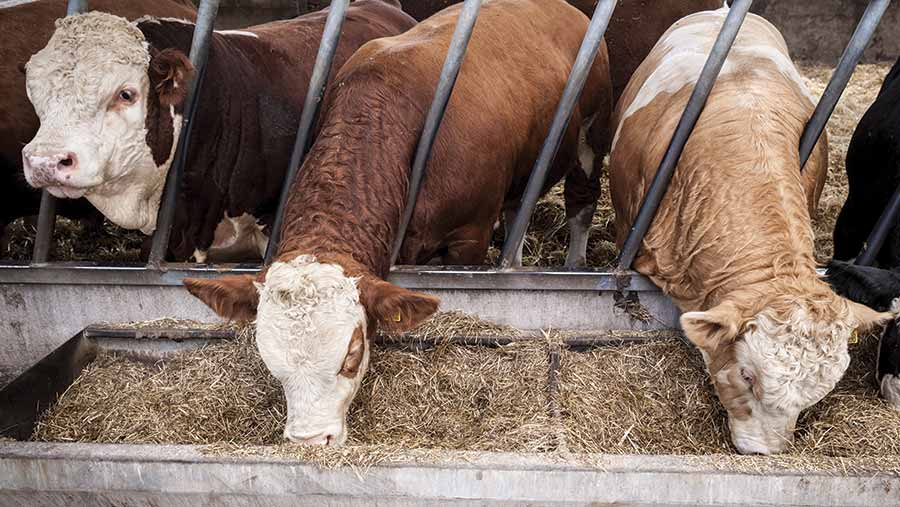 Beef nutritionist David Hendy believes the efficient production of finished cattle at lighter weights can still be profitable providing cattle are pushed at a younger age.

Although he acknowledges lighter weights mean less income a head, he maintains there should still be a profit a head if cattle are managed correctly.

“Finishers should have no concerns about being able to get cattle fit to kill at 400kg deadweight rather than 500kg – it just means they have to be pushed harder, grown better in the early stages and finished faster,” he says.

Mr Hendy is adamant that meeting new, lighter weight specifications is not about changing diets to achieve faster growth, but ensuring the growth of younger cattle is optimised to lay the foundation for fast and efficient finishing.

“Getting frame on the animal in the first place is essential – whether it is dairy-bred or beef-bred.

“Ensuring the energy density of the finishing diet is high enough is very important to achieve the most efficient growth.

“The finishing phase is a 100-120 day period – and that is applicable to cattle of varying ages.

“So the key is to have cattle that have achieved sufficient growth and development and are ready to go on to a system to attain the desired finished weight within that 100-120 day timescale.”

He says younger cattle will need a higher protein diet, but lower energy levels to produce enough frame-growth rather than condition.

Mr Hendy believes finishers should take advantage of lower feed prices to get the frame and growth on younger cattle when feed conversion efficiency is much higher than during the finishing period.

From birth to weaning feed conversion rates typically range from 2.5-4.5:1.

According to Simon Marsh, beef cattle specialist at Harper Adams University, starch is going to be a key ingredient too.

“Suckler calves have been traditionally fed on a creep that is low starch and high [neutral detergent fibre (NDF)] at about 16-17% crude protein.

“Now we need to change that with bulls that are to be intensively finished to get more starch into this creep feed.

“High NDF rations will encourage frame growth but what we need now is more starch in the creep at 25-35% whereas we have been using diets of below 25% starch inclusion.

“However, keep the starch levels low for heifers which rarely have issues with heavy weight carcasses.”

“Finishing cattle now need to be fed high energy starch-based rations at 35-38% starch and 13-15% protein in the dry matter.

“If you go to higher starch levels – say up to 45% – it will push them faster, but acidosis is a risk, especially if the cereals are overprocessed.”

And rather than focusing on buying smaller stores, beef finishers should actually look to manage the growing phase more efficiently, adds Mr Hendy.

“This is definitely not about having to buy smaller stores cattle in order to achieve lighter slaughter weights.

“The genetic potential of these cattle is the same whether you finish for 380kg or 450kg – the key is managing the growing and finishing phase more efficiently.”

Cattle bought as stores at about 500kg need to go straight on to a finishing ration with a high energy density to kill out at about 60% – say 740kg liveweight, he advises.

“The trade wants quality, continental-type R and U grade 4L heifers with good cover that hit the scales at 480-550kg (liveweight) to produce a carcass of about 280-340kg (deadweight).

“This is the type of animal that will find more customers than anything else in our market.”

Meanwhile bestselling weights for steers is about 550-620kg, he adds.

He is confident finished buyers will acknowledge that carcasses that specifically meet their specifications must be rewarded in pence per kilo premiums, which should offset some of the lost kilos.

“This is the only way the industry can survive.

“If the trade doesn’t keep the money in the industry there won’t be any beef for them to buy.”

Making better use of proven performance genetics by selecting bulls with superior growth rates has never been more relevant to beef producers as they adapt to lower finishing weights, says Alison Glasgow, technical manager of the British Limousin Cattle Society.

“Growth is still the key driver even when cattle are being finished to achieve 350kg carcass weights from steers at 16-months onwards,” says Mrs Glasgow – but cow type and size will also need to be reviewed by suckled calf producers.

“Bulls that are in the breed’s top 10% for growth, in the top 10% for muscling and around the breed average for fat, are likely to be the sires to produce progeny that will finish early.

“For many suckled calf producers there will be no need to make drastic changes to their system, it’s just a case of making sure the bulls being used really are capable of doing what they should be doing.

“If bulls have been used that are producing progeny taking two years to finish, now is the time to ramp up the power of the genetics to produce cattle that will finish earlier.”

They will include an EBV figure for “age to slaughter” which will identify the genetics capable of producing cattle that will finish at an earlier age.

Stephen Graham of Gilsland, Carlisle is now hitting his 400-430kg deadweight specification with almost 80% of his home-bred steers based on Limousin and British Blue genetics – and most are U grades.

“With this type of cattle we’re making the most of their conformation and growth – the better shape they are the less they weigh and that’s what’s wanted.

“So suckled calf producers breeding the right type of cattle should be well placed to meet the bigger demand for lighter weights.”

His cattle are finished at 19-22-months and are on ad-lib diets from being housed in September.

“The challenge for us now is getting them fit enough before they are overweight and to get them right ideally 410kg, although some will be up to 420- 430kg.

“We have altered the ration several times in the past few months as we try to produce a feed that will get them to the right weight as quickly and as efficiently as possible.

“We’re using a little more flaked maize and barley and are trying to get the ration a bit more ‘oily’ to help them digest the feed faster.”

They are convinced quality suckled calf producers could benefit from the new rules.

“I think the need for better quality cattle that kill out better will make finishers look even more towards suckler herds that can produce high killing out percentages at lighter weights,” says Mr Sedgely.

He feels smarter calves were traditionally attracted to the butcher trade but now that’s going to be what’s wanted on a much bigger scale.

“These calves have always been bred to finish faster and at lighter weights compared with the bigger, rangier dairy-bred crosses so suckled calf producers have the opportunity to take advantage of this situation.

He says he won’t be making any changes to his system because they are already producing suckled calves that have the growth genetics the finishers need to hit their spec.

The Sedgely’s half-bred Limousin-cross British Blue cows go back to the Limousin for their first two calvings to produce three-quarter Limousin calves. Cows are then put back to the British Blue.

Dunbia’s specification changes came into force on 16 November. Under the new proposals animals in the range of 400-415kg will have 10p/kg deducted, while heavier animals of between 415-440kg will lose 20p/kg.

Beef procurement manager Adrian Fell of Dunbia at Preston, Lancashire, says the ideal cattle weights his company is now looking for to supply supermarket clients will produce carcasses at 280-350kg and O-plus and better.

“We appreciate producers can’t change their systems overnight. We need 4,000 prime cattle a week to supply our abattoirs at Sawley and Preston so we need beef farmers to stay in business.”

On 18 December St Merryn (2 Sisters) announced it would be tightening its classification grid from 4 January. Under their new rules it reduced the upper specification weight limit to 400kg and capped the weight allowed for all types of cattle at 420kg. It also added a 5p/kg penalty for cattle weighing between 400.1kg and 420kg.

A company spokesman added: “Increasing numbers of retail customers have determined that they no longer wish to use meat from young bulls in their premium and standard ranges.”

Ideally 2 Sisters said it is looking for a good level of finish with fat classifications of 3 and 4L on the grid.

ABP has implemented VIA to a number of its UK sites and now uses a 15-point grading grid, which is more detailed than the original five-point grid.

Subsequently cattle that fall out of specification will be penalised more heavily. However, he points out that the vast majority of cattle supplied to ABP are in spec and the average carcass weight processed by ABP is approximately 330kg.

He added: “We have realigned the grid to fit the retail market. For us it’s all about maximising higher meat yields and encouraging improving production systems through our farm engagement groups.”