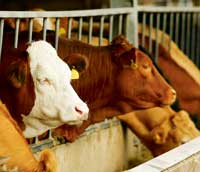 “We have seen record prices being achieved in the past few weeks, with livestock markets leading the way,” says executive secretary Chris Dodds. A 26% increase in numbers this week (to 10 May) caused finished steer values to weaken slightly, to average 158.1p/kg liveweight across the UK. However, that was still almost 11% higher than the same time last year.

Heifer and young bull prices continued to firm week-on-week, to average 165p/kg and 153p/kg liveweight respectively – 12% and 15% higher than a year ago.

Cattle availability is tighter than last year, and both domestic and export demand are strong, adds Peter Kingwill from Hobbs Parker.

“The weaker pound is helping. The competition all round is increasing, which is good for everyone. We are even seeing the fifth quarter now worth between £100 and £150 per bullock.”