Calving heifers at two is a key efficiency driver for Nottinghamshire suckler producer Ian Willison, who is aiming for fast early growth rates and a good balance of maternal genetics in his replacement heifers.

Replacement heifers calve down at 22-23 months in the autumn-calving Simmental cross Blue herd at Williamswood Farm.

Heifers are weaned at an average weight of 366kg and manage daily liveweight gains (DLWG) of more than 1kg. This means most heifers are served at a liveweight of about 425-450kg, which at 65% of mature weight is the target bulling weight of a 650kg mature animal.

Bulling heifers are served with high-index Simmental genetics, once using AI – with conception rates averaging 70% – before running with a home-bred sweeper bull.

“We are assessing animals from one year old and usually serve all heifers between 13 and 15 months,” explains Mr Willison. “Once they go beyond 15 months we don’t serve them as at this point we could be breeding with slow-maturing animals and we don’t want that.”

The focus on maternal genetics is a major part of the success at Williamswood, where top-of-the-range estimated breeding values (EBVs) for maternal characteristics underpin sire selection.

High importance is placed on using bulls on heifers that are easy calving, with positive EBVs for calving ease direct, short gestation length and below-average birth weights. Once the genetics are in place, the target is for fast growth at a young age.

A daily liveweight gain from birth to calving of 0.84kg is required to reach 650kg, however Mr Willison pushes his heifers early in life and last year their DLWGs were 1.07kg from birth to service, with a mean bulling weight of 491kg at just 13.7 months old.

Autumn-born heifers are fed 18% CP rearing nuts usually by seven weeks of age, followed in November by a 17% CP high-NDF 19% starch at 1kg a head a day to optimise frame development. In the new year heifer calves are left on mother’s milk and silage.

“These are likely to be from more fertile cows and will be heavier at bulling,” he explains.

Hay is offered ad lib at this stage alongside vitamin and mineral buckets, with heifers typically weighing 576kg at 19 months old. In July 2015 the pre-calving liveweight of heifers was 599kg.

Selecting to calve at two

Heifers with the best temperament are chosen as replacements, focusing on the moderate-sized animals. Female families are then looked at to make sure their lines are performing. Finally the EBVs of fathers are assessed.

“Any lines that have or are developing calving or fertility problems are ended,” says Mr Willison. “Only heifers 13 months or older and healthy are served with a proven easy-calving bull, but the bull’s daughters’ calving score should be positive if they are to be kept.”

See also: Beef Focus Farm: How to produce one calf a cow every year

The breeding system at Williamswood produces a terminal calf from a maternal female Simmental cross Blue female put to a terminal Simmental sire. “This is the best way to produce a profitable terminal calf and the Simmental is very good at this,” adds Mr Willison.

By breeding his own replacements from AI, the herd has been accessing the best genetics in the world for 30 years.

This allows the farm to produce cows that start their productive life at 550kg and end it at 700kg. This way they give a decent cull value after weaning calves at almost 50% of working cow bodyweight.

This is already being achieved at Williamswood, with the 2015 crop of calves having just recorded a DLWG from birth of 1.44kg. This equates to a 200-day weight of 335kg, with a cow efficiency of 49.9%. 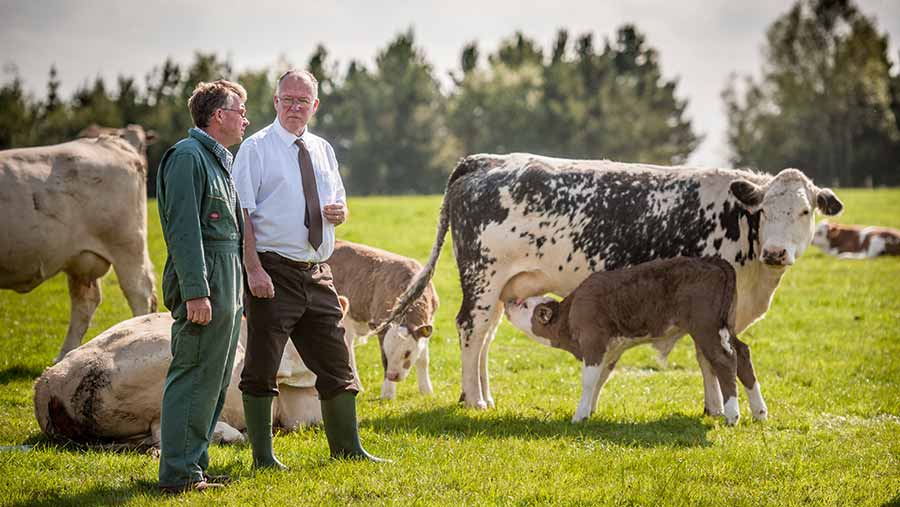 Separate from the herd

An important factor in calving at two is running heifers separately, allowing them to grow in a low-stress environment.

He says if heifers grow fast when young and are managed well then the concerns people have over calving at two are “mythical”.

“From what I have seen, heifers calved at two can calve easy, they last longer, they end up getting bigger and they carry more milk,” stresses Mr Willison. “There’s no difference in mature size – that is down to genetics and how the animal is taken care of.”

An average bulling age of 13.7 months allows the Williamswood heifers to calve replacements in July prior to the main herd calving in August to mid-October, ensuring they get more attention and time to grow frame for the next lactation.

Heifers are finally introduced to the mature cows twelve weeks after having their first calf at winter housing. This year will see about 25 heifers mixed with the herd as part of a planned expansion phase on the farm.

This mixing is typically a problem-free transition for the 15-17 heifers retained in a typical year, although one smaller heifer may get pushed to the bottom of the pecking order.

Generally though, issues are minimised by the feeding system. “Having a total mixed ration available on the concrete floor 24/7 helps the heifers hugely,” explains Mr Willison. He budgets for about 60cm head space for each cow.

And while he looks to limit feeding in the last trimester, he offers the best grazing and winter forage once calved to ensure sufficient nutrition to develop the second embryo.

“The most important thing to calving a heifer at any age is to make sure she has whatever feed she needs after calving and up to conception of the next calf.”

Calving heifers at two years old is more efficient and productive. It is therefore unfortunate that the UK beef industry is calving at an average of 33.6 months, according to Harper Adams beef specialist Simon Marsh.

He says there is “overwhelming evidence” that home-bred replacements should be calved down at two years.

By the time a cow is 10, one that first calved aged two and her daughters will have produced 41 calves

Whereas a cow that first calved aged three and her daughters will have produced 19 calves, Mr Marsh points out.

Take our poll on the age you calve your heifers 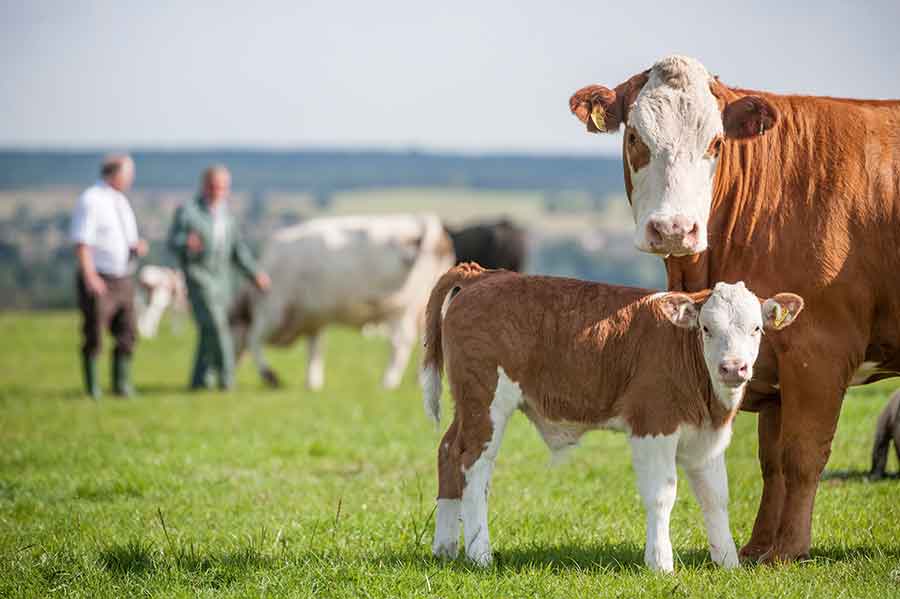 “Calving at two years old typically requires 400kg of concentrates a head versus 250kg,” admits Mr Marsh. “However, a three-year-old requires almost double the amount of silage and more than double the land.”

“One of the major criticisms or failures with calving at two years is that the heifers subsequently struggle to get back in-calf,” says Mr Marsh.

“The simple solution to this problem is usually to manage first-calved heifers separate from the main herd so they don’t get bullied and get extra attention. This could be in a management group with lean cows to avoid having too many groups in the herd.”