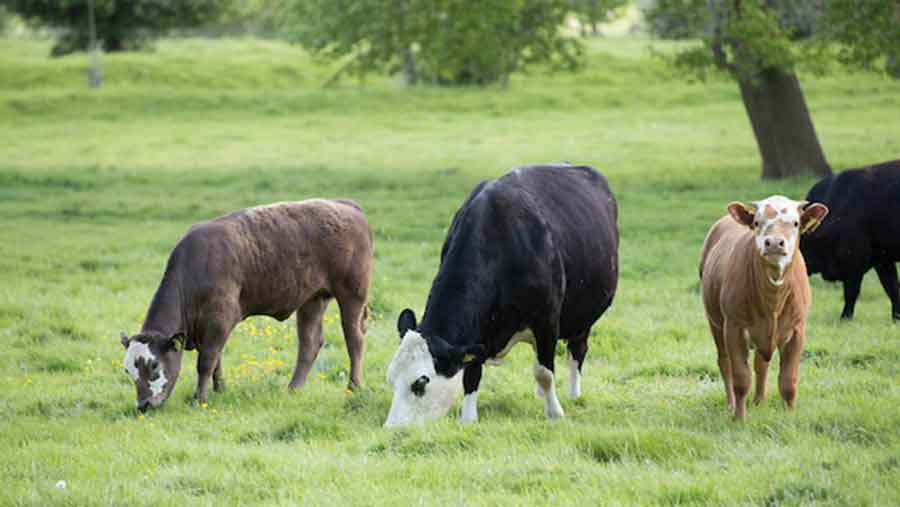 Finding the right sized cow to suit the system is key to suckler productivity. Farmers Weekly analyses whether bigger or smaller cows are best.

A growing number of farms are identifying the larger cows in their herd that can wean 50% of their weight by 200 days.

Target market and whether progeny is sold as stores or finished also needs consideration.

For many years, advice levelled at commercial suckler herds has been that moderate cow size helps profit by increasing output per hectare.

However, senior advisers are realising this advice may need reviewing.

On one hand, smaller cows can be stocked higher, while on the other hand larger genetics can finish quicker to reduce overheads and fixed costs.

Debate also rages around whether weaning weights are merely a yardstick for businesses selling stores or if the real efficiency measure for the beef sector is on kilogrammes of saleable meat produced per cow.

The conclusion of SAC Consulting Beef Specialist Basil Lowman is that calf weaning weight is the “best simple guide” to cow efficiency.

“In both cases, the bigger cows of Ian Willison and Simon Frost are more profitable, especially when you factor in the cull value. This sets the cat among the pigeons in terms of what we advise to the industry. We need more research into this area,” says Mr Marsh.

“I would never recommend 800-900kg cows. I’m happy with 700kg cows. This is up for debate for lowland and upland farms where forage/feed is not a limiting factor but in hill country you must have small hardy cattle.”

“Lower mature size typically means slower growth – the two have been shown to be related. If a heifer is big at 400 days then she is typically big as an adult. There are animals in all breeds that can break this correlation and EBVs are the way to identify them,” she says.

“It is becoming obvious that that fast finishing is more profitable. In 2015, an SRUC study comparing carcass value of Limousin-cross Holsteins at 365 days and 800 days found that only £80 of value was added to the carcass [by finishing later] and that requires a heap of overheads.”

However, research from Ireland suggests smaller cows are punching above their weight.

A four-year trial to assess the progeny performance of four cross-bred cows is under way on Teagasc’s Derrypatrick herd.

Weaning weights and carcass weights are being used as yardsticks for cow efficiency, with bulls slaughtered at 18-19 months on ad-lib concentrates for 100 days after a three-month grazing period and heifers finished at 20 months after two seasons at grass.

So far, the Limousin cross Friesian is ranked highest (see below).

Neil Shand, chief executive of the British Simmental Cattle Society, believes value should be added in the change to suit all types of systems.

“Optimal cow size depends on unit and business philosophy – no one size will fit all. Ultimately, the farmer requires a consistent price and would benefit if the processors drove more value and looked at cutting large (450kg+) and small (275kg) carcasses differently,” he says. 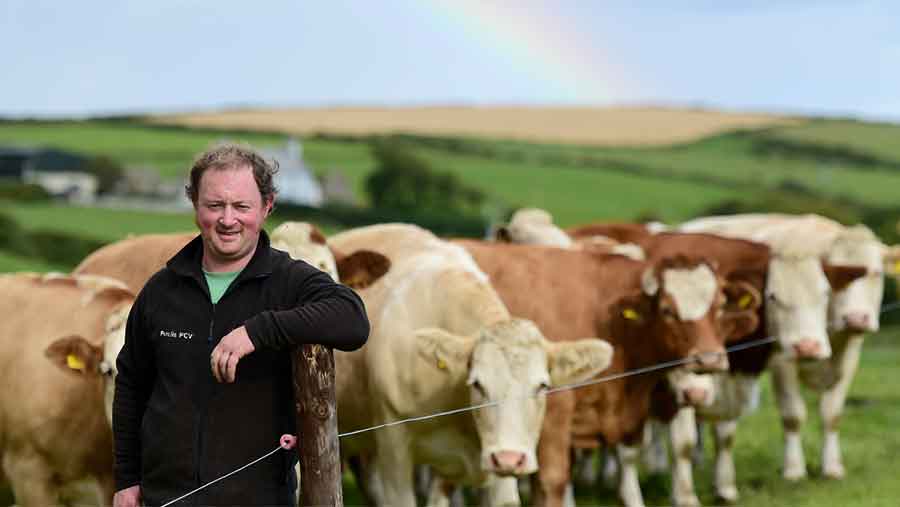 His average cow size for the last three years has been 671kg, but soon his herd of pedigree Simmentals will be down to 650kg. His cows are 43% efficient on average, but Mr Moyles is hoping to increase efficiency to 50%.

Since reviewing cow size and grassland management in 2012, Mr Moyles has seen cow numbers lift from 50 to 80 cows and he can now operate his business without dipping into his single farm payment.

Mr Moyle’s rotationally grazes stock on a 21-day rotation, shifting cattle into a new paddock every three days. The aim is for cattle to enter paddocks at lighter covers of 10-12cm. If grass growth gets too high, paddocks are baled rather than topped.

Currently at 70 head, Mr Moyles’ is now considering shed developments to match the potential of his holding after watching profits head in a “very positive direction”.

Furthermore, soil sampling every other year and slurry usage has slashed annual fertiliser bills. Usage fell from 26t in 2012 to 14t in 2015.

Mr Moyles is breeding cows that can calve unassisted with an average birthweight of 39-41kg to produce a 350kg carcass in under 16 months.

“I challenge my herd to operate in the environment in which they are reared, that is a grass-based farm,” explains Mr Moyles. “The herd only ate 71kg of meal this spring, largely to train heifers. Pre-calving and magnesium mineral licks and some straw over winter are the only other purchased feed inputs.”

Calf weaning weights are recorded and cows are weighed as part of farm data collection. Last year this his 896kg mature cows weaned a 279kg calf at 30% of bodyweight.

But heifers weighing 604kg weaned a 436kg calf on average, catapulting them into the lead at 72% efficiency.

He believes in optimum production, not maximum production and that over reliance on fossil fuels and feed are a threat to the beef sector. 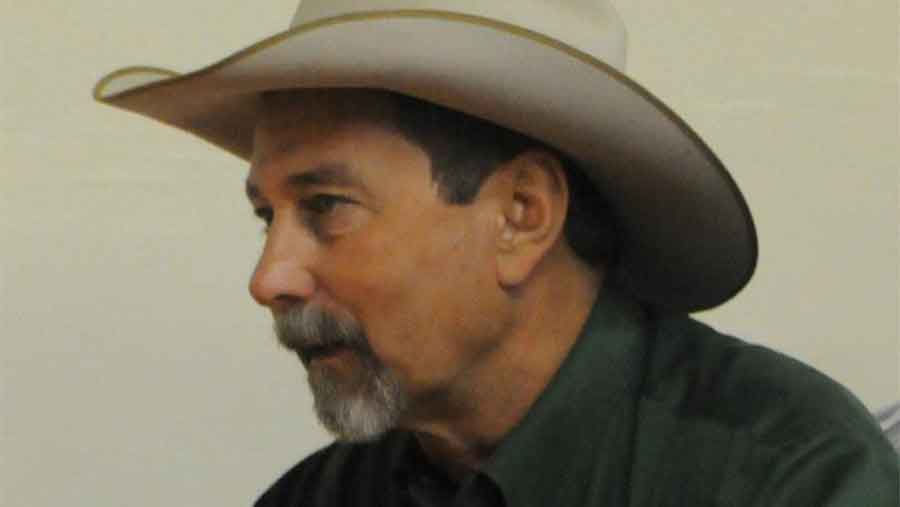 He aims for cows that weigh 550-570kg and measure 122-128cm up to the hip height. But he stresses it is folly to go off cow weight alone and emphasises the importance of condition scoring to accurately benchmark herd performance.

Therefore, Pharo Cattle Company cows ideally fall in the 4 to 6 body condition score (BCS) range on the 1-9 scoring system they use in the US.  (1 = emaciated, 9 = obese), with each condition score worth an extra 36kg and a quarter score worth 9kg, he explains.

Per cow v per hectare

“For too long we’ve been driving for high weaning weights and we’ve accidentally arrived at having large inefficient cows. Increasing kg of meat produced per calf will typically decrease profit per hectare.

“No matter how good your environment, you can run more smaller cows and increase your profit per hectare.

“Rotational grazing on expansive ranches means frequent herding of cattle. A few years of doing this and you’ll find you can stock 50% more cows because of better grazing management.

“My philosophy is to mimic the patterns of the ungulates on the rangelands. Deer, elk and bison are all cloven hooved animals with a rumen, so I calve my cattle later into May on good spring grass rather than calving them before grass is around in March and April.

“I want to raise calves on grass and use milk as a bypass protein supplement. I want to see calves grazing at a week or 10 days with their heads down. Milk is not a maternal trait, it is a growth trait in my eyes – too much milk is inefficient.”

Combining a mixed arable and beef enterprise is allowing Mike Powley to justify cows weighing in at over 800kg because of high efficiency feed conversion he is achieving on home grown cereal diets. 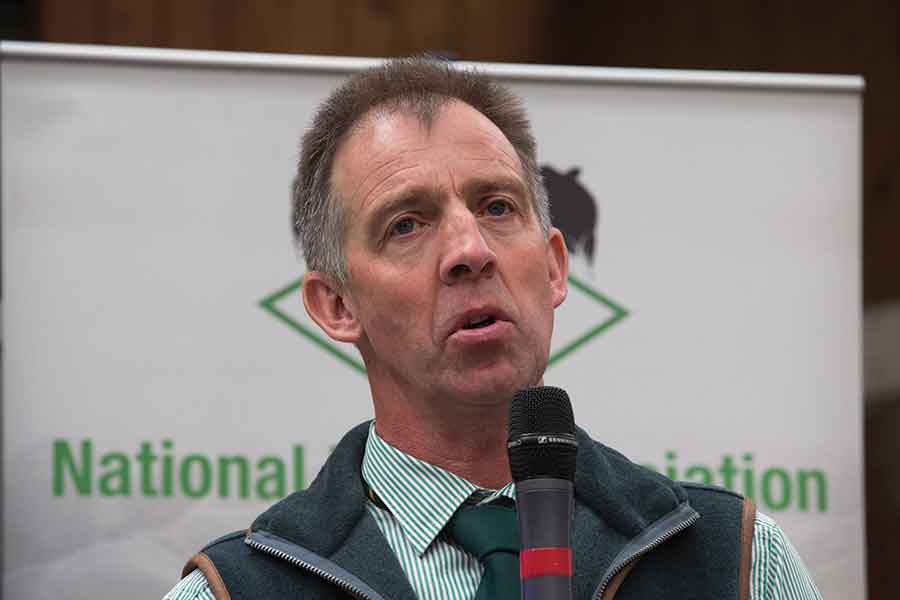 Most of Mr Powley’s South Devon-cross Limousin cows (put to high index Blue bulls) are around the 730-750kg mark and produce bulls averaging 1kg daily carcass gain from birth to slaughter, with heifers averaging a daily liveweight gain of 1-1.1kg on red clover leys and some doing better at 1.3-1.4kg.

But rather than focusing on weaning weights, he believes the end product matters more to him as a finisher and he is looking at ways to benchmark his herd in the future according to kg of saleable meat per cow or per hectare.

“Cow weaning efficiency might be a good measure for suckler herds selling stores but not for people like me,” explains Mr Powley. “Feed intake in kilos against kilos of meat produced is also a useful measure for finishers.”

Heavy carcass progeny from his 100-head herd were being rewarded for carcass weights of around 500kg. But despite penalties and tighter specification, meaning 420kg is now the limit for his processor, Mr Powley still advocates big cows for his system.

“Growing cereals on the farm is a huge factor – I can turn £1 of feed into £2 of beef,” he explains. “On that basis the longer I can feed cattle the better.”

He argues that bigger cows with more frame can store more energy to mobilise in the winter and are worth more on a cull cow basis, gaining 50kg until they are six years old – a gain of £60/year at £1.20/kg. Cattle are housed in late October/early November to avoid poaching on the heavyish pasture land.

And while some breeders advocate smaller cows that cost £30 less to maintain each year, he stresses that his improved grades offer returns that outweigh this.

“I am producing U+ and E carcasses at 420kg and generally higher growth rates come from bigger genetics. When we started selling beef boxes we soon learned the differences between an E and an R-grade.”