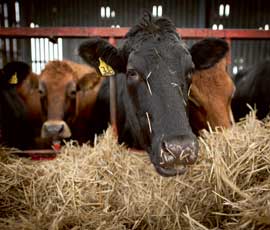 DEFRA has clamped down on the illegal trade of older cattle by introducing stricter movement controls for beef animals.

Cattle born or reared in the UK before 1 August 1996 now face extra precautions to prevent meat from these animals entering the food chain, a DEFRA statement said.

The change follows a government investigation which uncovered a trade among farmers who falsified documents to get older beef into the food chain.

So far one farmer has been convicted and jailed for 10 months in a case brought by Cumbria County Council, a DEFRA official said. “The investigation is ongoing,” he added.

Farm minister Jim Paice said that he regretted that the measures had been necessary because of the “illegal activity by a few individuals”.

“The industry has worked hard over the years to ensure British beef has regained the good reputation it deserves, both at home and abroad.

“We want to maintain this reputation, so it’s sensible to introduce this extra safeguard. It will give us additional confidence that these animals don’t enter the food chain but shouldn’t have much impact on most cattle keepers,” he said.

The department official added: “It is illegal to slaughter pre-1996 animals for food, and specified risk material (SRM) such as brain and spinal cord is removed from all cattle after slaughter.

“In addition, any cattle aged over 48 months are tested for BSE after slaughter and only those that test negative are allowed into the food chain.”