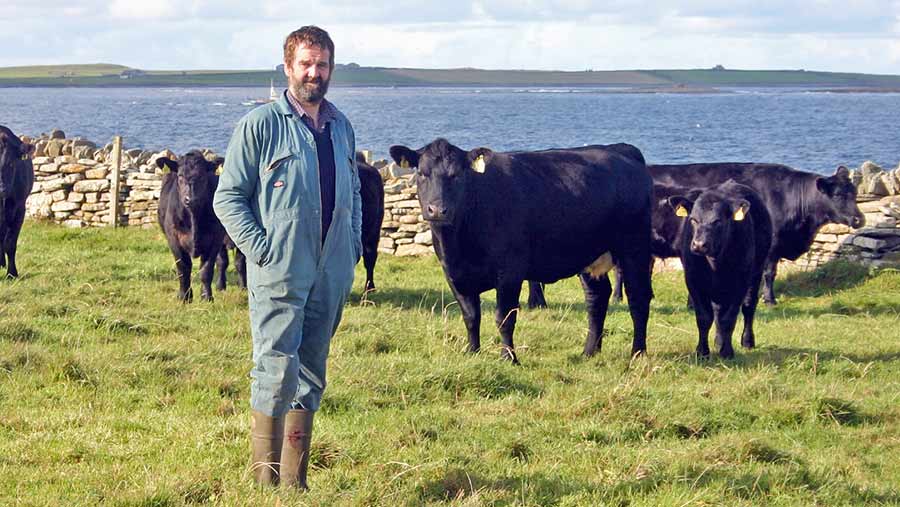 Healthy and efficient animals are a must for Neil and Jocelyn Rendall, who farm one of the most remote and smallest Orkney islands.

The Isle of Papa Westray (“Papay”), one of the most northerly Orkney islands, is 20 miles by ferry or light aircraft from Kirkwall, Orkney’s capital on the main island.

Following the closure of the Orkney abattoir, all traded livestock – for finishing or slaughter – must travel to the mainland at a cost of £12.80 a head.

See also: How a large Luing beef herd is managed on the Scottish Isles

Unavoidable transport costs to and from Orkney also inflate the prices of purchased farm inputs and eat into the returns from farm outputs.

To counter this double-barrel financial negative, Orkney farmers have traditionally focused on producing premium-earning stock as efficiently as possible.

The main enterprise at Holland Farm is a low-input, 78-cow herd of pure Aberdeen Angus cattle.

Cattle are housed from late October until early May. With no grain grown on Papay to produce straw, cubicles are bedded with rubber mats for stock comfort.

Forage – either grazed grass or silage with minerals – is the main year-round diet, although autumn calvers receive a “barley boost”.

Spring calvers calve outdoors in May and June and autumn calvers in September and October.

Calves, when housed, are fed ad-lib silage, enhanced by 1.6kg of barley and 0.5kg soya, which continues after weaning (January) until turnout.

As with many islands, nature is in control on Papay, and nature decrees that the only realistic “crop” is grass.

Holland Farm, with its 360deg sea view, is all grass. White clover-rich leys, down for approximately 10 years, can withstand the wind and salt spray. Nine miles of dry stone walls provide field shelter for stock on the windy, treeless and exposed island.

One benefit is that very little fertiliser is required to sustain grass growth on the naturally fertile Papay soils. 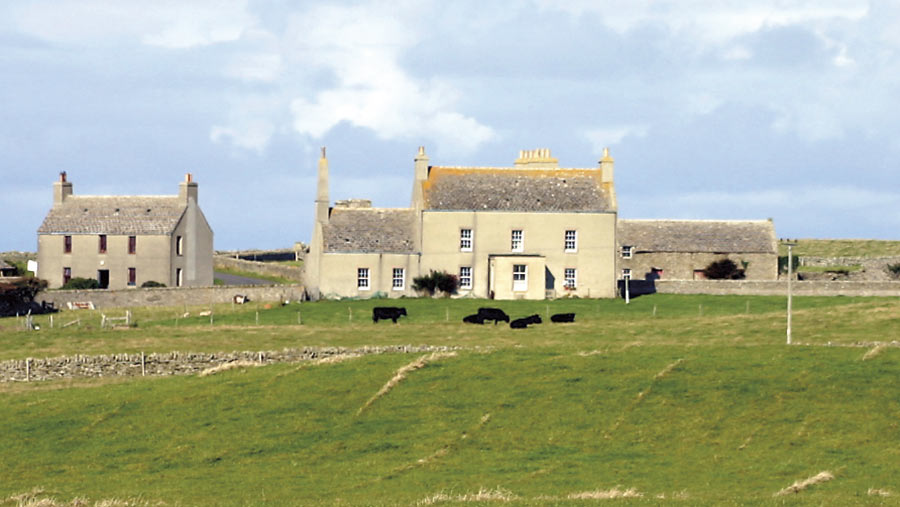 In the first week of April, two units/acre (2cwt/acre) of 2.1.1 is applied to about 16ha of grazing for freshly lambed ewes and some years, when deemed necessary, the silage ground receives the same.

The Rendalls believe that to be productive, stock must be healthy.

Their herd was one of the first to join the Orkney Livestock Association (OLA) bovine viral diarrhoea (BVD) eradication scheme, launched in 2001. Accredited BVD-clear since 2002, the Rendalls’ herd is also at Johne’s risk level 1.

“This gives us the confidence to rely on biosecurity, without vaccination.

“The only cattle we buy in is the occasional stock bull, which is thoroughly tested and isolated for up to four weeks before joining the herd.”

Another reason why good health is key is again the farm’s remoteness. The vet needs to fly from Kirkwall to get to the farm and one of the Rendalls’ fields acts as the Papay “airport” runway.

“Other than for routine visits, fortunately we rarely need a vet,” he adds.

Since 2001, OLA has almost cleared the islands of BVD, with more than 95% of Orkney herds (beef and dairy) currently eligible for accreditation. Until a breakdown in March 2018, no BVD had been found in Orkney for more than 18 months.

Previously many of the Holland Farm cattle were finished off grass and sold to Scotbeef at Bridge of Allan, near Stirling. Scotbeef supplies Aberdeen Angus beef to some of Britain’s main retailers, including Marks & Spencer.

Despite farming on the very edge of Britain, the couple are producing top-quality stock and have won Scotbeef’s prestigious Aberdeen Angus Beef Finishing competition twice, in 2007 and 2011.

But now all stock is sold as stores, between 15-17 months, through Orkney Auction Market in Kirkwall to capitalise on the excellent trade, which is yielding a better premium than finishing stock, they say.

With no roll-on, roll-off ferry facility on Papay, all cargo too heavy to carry is craned on to the ferry, which calls on Tuesdays and Fridays.

The Rendalls’ cattle travel to the ferry in the farm livestock trailer, which is then carefully hoisted from the pier to the ferry deck. The cattle remain in this trailer until unloaded in Kirkwall mart. The trailer, crammed full of straw to avoid freight costs, returns on the next Papay ferry.

All traded Orkney auction cattle, plus finished stock direct from farm, travel to the livestock lairage at Kirkwall ferry terminal, where they are loaded for their journey to Aberdeen into specifically designed transport trailers.

These trailers provide more comfort for the travelling bovines than most human commuter trains. Facilities include feed, water, inspection ladders and lights, plus a “hospital” pen.

Currently there are no livestock slaughter facilities in Orkney. A consortium of Orkney butchers hope that by early 2019, they will have new premises where they will be able to slaughter and process approximately 20 cattle, 25 lambs and 15 pigs a week.