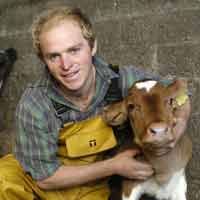 The enthusiasm of last month has been tested as the TB test resulted in another reactor and the computer and I had a big fall out when it mysteriously changed a lot of the cows’ ear numbers.

Just as mysterious are the four cows with swollen back legs. Several reasons have been suggested, one of which is bruising from being pinched in the race when testing. Fortunately, a course of treatment has helped.

At the moment cell counts are back to where we like after stopping using the sanitising wipes a month ago and resorting back to using a teat dip.

We recently went to the Bath and West Dairy Show and after never visiting before I was pleasantly surprised, spending the day with businesses and farmers sharing a positive outlook for the future. There were plenty of ideas to think about and a fine selection of cows.

The day could have been spoilt for us on the way up when we struck a pheasant on Bodmin Moor. The well built bird managed to go through the front grill, push the radiator back and rupture the power steering pipe. Determined to have a day off we drove to Shepton Mallet and back with no power steering – roundabouts were tricky.

That evening was our Young Farmers AGM when my YFC career came to an end. From a shy club member through county and national level and finishing as one of the club leaders, an experience I would fully recommend.

Meanwhile it’s back to laying concrete and hoping the cattle don’t get out on to the road again just as we are about to start levelling.