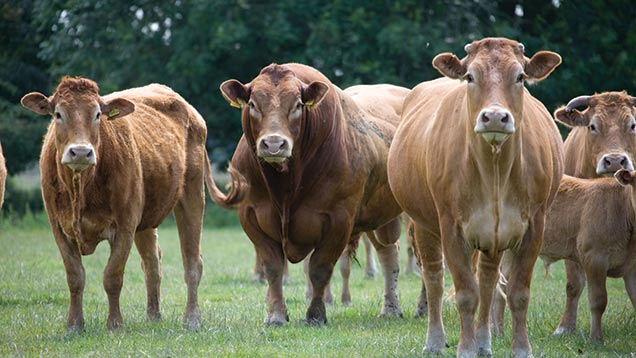 Anyone who thinks they can look at a bull and assess its calving ease is mistaken. It’s not possible to see the genes that control how easy calving a bull will be so, don’t take the risk.

“The Calving Ease Direct EBV figure must be considered. Negative figures are bad and positive figures are good, so aim for high positive EBVs if you want fewer assisted calvings,” says Mrs Glasgow.

“The higher the positive figure of a bull, the easier his calves will be born. But there is also a balance that bull buyers have to consider,” she adds.

Bulls with figures for extremely easy calving and at the top end of the positive scale on EBV may not be the bulls that have the best frame and growth.

“So a balanced decision has to be made to select a bull that has the size, the scope and the growth, but whose progeny will be easily enough calved.”

Easy calving is a must-have for the Dandie family. The labour demands of calving their herd of about 100 sucklers mustn’t impinge on the springtime workload of their 810ha of cereals in West Lothian.

“The calves that need to be pulled are often the ones you lose in the first 30 days. So we want a live calf that’s delivered naturally and easily,” says William Dandie, who farms with his father Walter at Learielaw Farm, Broxburn.

He admits he doesn’t look at a bull’s figures to start with. “We need bulls that will produce E- and U-grade finished cattle for us, but once we’ve found bulls we like the look of the figures give us the extra confidence when we’re making this level of investment.”

Well known for their Limousin cross and British Blue cross finished cattle – as well as running a pedigree Limousin herd – the family paid 15,000gns in 2013 for the bull Emslies Hendreron who has the much sought after combination of growth and muscularity with ease of calving.

“Calving runs for 10 weeks from early February, so we want it done quickly and with minimal labour,” Mr Dandie says.

“Easy calving is a priority for us. We took semen from Hendreron and synchronised all the heifers,” he says, adding that the ease of calving was even better than expected.

Emslies Hendreron has a Beef Value of LM54 (Top 1%) and is well above average for all the calving traits. His overall Calving Value (a combination of Calving Ease and Gestation Length) is LM5C which is in the top 1%.

All breeds have their exceptional “curve bending” bulls whose figures show them to be high on EBV figures for growth and muscling – but are also easy calving.

“There are bulls that are good on growth and muscling and may be in the top 10% or even top 1% for calving ease. They can be difficult to find but they do occur.

“For Limousins, as a rule of thumb, bulls in the top 25% on Calving Ease Direct EBVs are usually good to use on heifers. Bulls with EBVs below that and heading down to the bottom 10% are probably best used initially on cows.

See also: EBVS – how to use them when buying bulls

“Bulls within this lower EBV range will produce problems of one sort or another so much will depend on the individual management of the herd and how fit the cows are. This will impact on the degree of problems experienced.”

While many breeds have seen a slight deterioration in their average Calving Ease Direct figures over the past decade, it hasn’t been a linear deterioration when considered alongside the gains made in growth.

“The growth gains achieved in Limousins have far outweighed the slight deterioration in calving but there are still many bulls that combine easy calving and good growth.”

Suckled calf producers who retain females as herd replacements that are sired by a bull that hasn’t been an easy calver will experience some lingering calving issues.

“In that situation it’s important to select a bull to use on those heifers that has a high EBV for calving ease in an effort to help counteract any potential inherited problems.

“But self-replacing herds do have to be even more careful because bulls that are easy calving can often be longer and narrower in their frame. Daughters retained from these bulls may produce lighter-framed females.

“So the other EBV that’s relevant for self-replacing herds is the Maternal Calving Ease EBV to indicate how easy calving a bull’s daughters will be. Herds retaining their own replacements not only need an easy calving bull, but also one that has reasonably good maternal calving ease – a trait to be passed on to his daughters.”

Suckled calf producers wanting to know more about ease of calving figures before buying a bull are advised to initially study the data available in the sale catalogue.

“Research has shown that bulls bought for use in self-replacing herds will have a genetic impact on the performance of the herd for as long as 20 years. To turn up and buy a bull without studying figures is very short-sighted for any beef business.

“Calf mortality caused by a bull that produces difficult calvings is bad enough, but the bull concerned is then sold, adding to the financial losses incurred,” says Mrs Glasgow.

This year’s Livestock Event features a dedicated genetics zone, where visitors can find out more on selecting the best beef sires and using EBVs for better breeding.