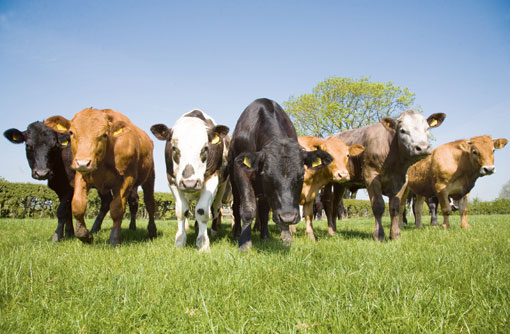 Efficient beef production was one of the main topics up for discussion at Scotland’s Beef Event 2011, Corskie Farm, Fochaber. Eddie Gillanders reports

Too many beef producers are continuing to chase an illusionary “crock of gold” by taking cattle to higher sale weights to achieve a high gross price, rather than concentrating on overall efficiency.

SAC beef specialist Gavin Hill told visitors that breeders were losing out by taking stores on to 18-20 months of age before selling them and piling on feed costs.

“Finishers then have to take them on to 28-30 months before they are ready for slaughter. The cattle may make £1,200 or £1,300 a head, but it is an inefficient system and many producers are failing to count the cost of getting them to those higher weights.”

A recent report from QMS highlighted that one-in-five cattle were failing to meet factory specifications because they were overweight or overfat which was costly for processors and resulted in penalties for farmers.

Mr Hill said although the increase in prime beef cattle prices in recent months was welcome, costs were escalating just as quickly. Prices had risen by 63% over the past seven years, but variable costs were up 44% and fixed costs 14% higher.

“Beef production has to become more efficient,” he said. “Breeders should be aiming to sell stores at a year old and finishers selling prime cattle for slaughter at 18-20 months. There is too much emphasis on trying to top the market.”

Breeders had to ask themselves if it was more profitable to sell 80 calves for every 100 cows put to the bull at £950 a head or 92 calves at £100 a head less. Reducing the amount of barley fed to cattle may not be the most efficient way of reducing costs when barley was £160/t compared with £100 previously.

The emphasis had to be on the type of suckler cow with good maternal traits and the ability to consume bulk forage rather than more expensive feeds. Put to the right terminal sire, these cows would still produce a highly marketable calf.

Over the past five years, 17% of steers and 32% for heifers slaughtered at the company’s Portlethen plant classified 4H or worse for fat.

“This overfatness is a waste to both the processor and the farmer, particularly at the current price of cereals and straw,” he said. “It also shows how important it is to treat heifers differently from steers.”

Average carcass weight was 350kg, but carcasses of more than 400kg resulted in problems in marketing higher value cuts.

“The most interesting fact is that some cattle of the same breed are reaching those higher weights at about 20 months, but many are no heavier after almost 30 months. This points to huge inefficiencies in the store period with too many cattle not being pushed hard enough.

“Some would advocate that creep feeding of calves is money well spent and fully recovered. We can see the true potential of most breeds and crosses from breeder-finishers, who are achieving good liveweight gains at a young age and marketing at 18-22 months of age.”

Mr McNaughton also said too many cattle were being moved too often, resulting in extra costs and higher slaughter weights, which was detrimental to eating quality.

“Tenderness is the one attribute our customers want above all else and it would certainly help if more cattle were marketed at a younger age, preferably under 24 months,” he said.

“It takes 50% more energy to produce 1kg of weight gain at 600kg compared with 300kg,” he pointed out. “Fast growing animals gaining at 1.5kg/day also need a third less dry matter for every kg deadweight than those gaining at only 0.75kg/day.”