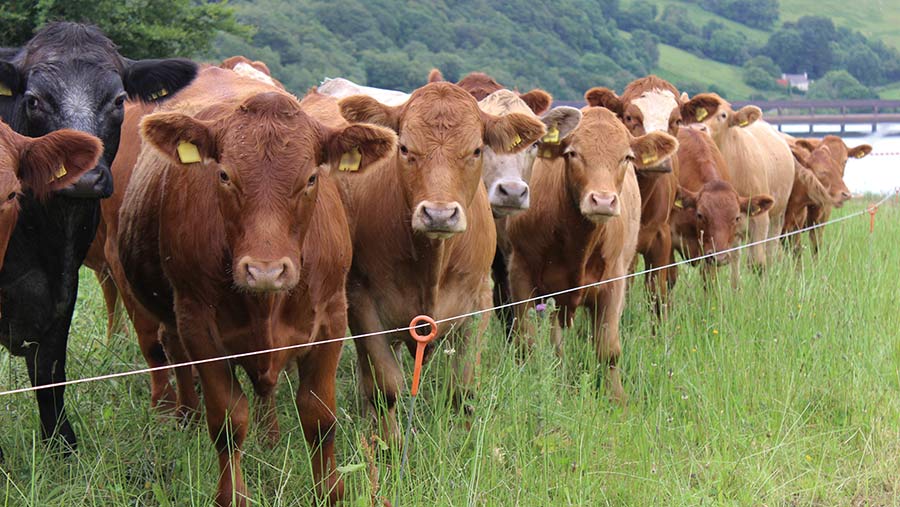 Rearing cattle from birth to slaughter without the use of either concentrates or fertiliser would be a challenge on any farm.

But doing so in marginal conditions on the edge of Exmoor National Park, where land rises from 245-365m above sea level, requires every process to be optimised, ranging from the method of growing forage crops to the choice of cattle breed.

Tom Armitage has fine-tuned the system at Lower Brown Farm, in Huish Champflower in west Somerset’s Brendon Hills, where he runs more than 200 suckler cows and finishes progeny.

He has achieved this with such accomplishment that he sits high on the Exeter University costings table for every major parameter, despite the farm’s less-favoured area (LFA) status. 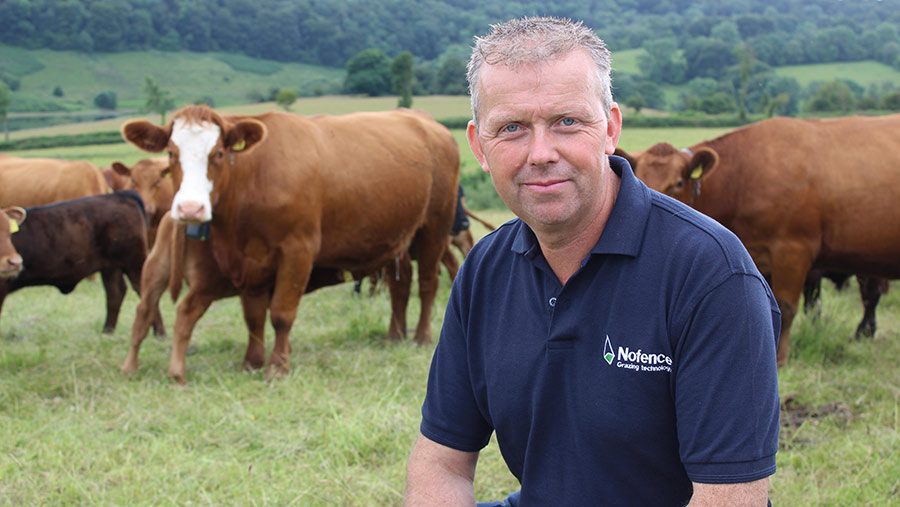 Farming 332ha (820 acres) under an organic system, of which only 121ha (300 acres) are ploughable, the profitability of the business relies on high-yielding and nitrogen-fixing forage crops, and hardy, fast-growing cattle.

After a variety of breeds was used on the farm, the switch was made to the Stabiliser about seven years ago.

“We find they hit the spot for this type of farm,” says Mr Armitage. “They calve unassisted, at two years, and the calves are small but grow very fast – competing with the Charolais for growth rates and grades.”

About 60 of the 150 autumn-calvers are served by artificial insemination, using genomically tested bulls selected for outstanding maternal traits, that also have high estimated breeding values (EBVs) for finisher and profit index.

Of these, about 30 are inseminated to sexed female semen, helping build replacement heifers. 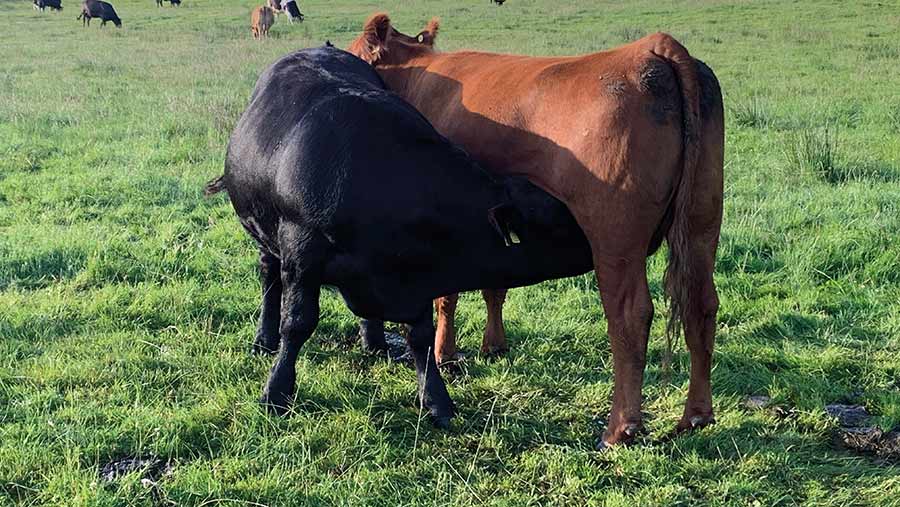 The remainder of the herd is bred to natural service, with a top 1% bull bought every two years.

“Another key for us is that the genetics come from America, where a premium is paid for eating quality rather than the lean, heavily muscled meat the Europ grid rewards, which results in poor customer satisfaction,” he says.

“We feel that if we’re being paid an organic premium, it’s important that the product tastes good.”

Realising the stock’s genetic potential with nothing more than forage requires meticulous attention to crop and grazing rotations.

This includes a heavy reliance on red clover in the 89ha (220 acres) of cutting swards and the 18ha (46 acres) of diverse arable silage.

This is harvested by late July, when digestibility and protein are high and before the crop dies off or the grain is fully formed.

This year, the arable silage comprises spring barley, oats and peas, always including a legume for its nitrogen-fixing properties.

This is undersown with a grass-clover ley, which is air-seeded and rolled in a separate pass, immediately after the cereal-pea mix has been drilled.

When the cereal is harvested, which we cut at four inches [10cm], it removes the shade from the sward and gives the young grass a chance to get going,” he explains.

Arable silage is fed to steers, as well as those cows that are housed in winter, and is a good complement to the red clover silage.

Lucerne is also being trialled for undersowing with the arable silage, as an alternative to the grass-clover ley.

“We hope to take some off when we cut the arable silage, followed by a cut later in the year,” he says.

Thereafter, he hopes to take three or four cuts every year and expects the crop to persist for four to five years.

The farm also grows 7ha (18 acres) of fodder beet, although this is only its second year on the farm.

Sown in early May after kale or a grass ley, it is strip-grazed with bales of red clover silage from October until April.

Both fodder beet and kale – also 7ha – are fed to outwintered cattle, which Mr Armitage says hold their condition well.

This includes all in-calf and growing heifers as well, as a recently acquired spring-calving herd of 41 head and their weaned calves.

Rotational grazing is essential to the success of the business and is currently assisted by a trial of “NoFence” virtual fencing.

This uses collars and GPS to contain the stock, allowing cattle to be moved remotely with an app when target residuals are reached. 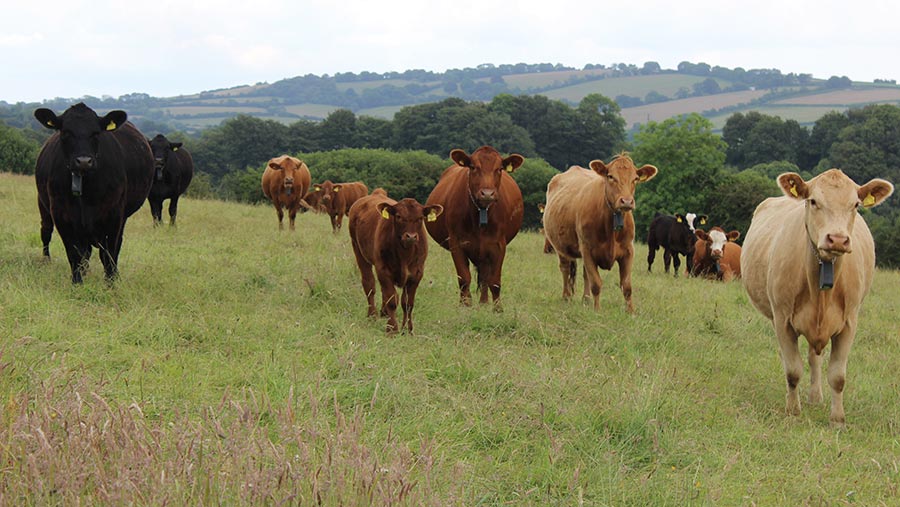 “We are aiming for residuals of 1,800kg DM/ha because we’re trying to maintain the performance of the stock,” he says.

“We were chasing 1,500kg DM/ha last year, but there is a balance between growing as much grass as you can and growing cattle – I don’t think you can do both by nailing everything to the ground.”

The biggest mob, comprising 200 head of cow-and-calf pairs, is moved every three days to fresh grazing.

Daily growth rates reflect the success of the farm’s policies, with steers ready for sale by 18-24 months.

Heifers are outwintered, where they grow more slowly to put on frame before the best are selected for breeding – calving on average at 24 months.

All other heifers are finished aged 24-30 months, as the organic beef premium is favoured over sales for breeding.

So far this year, steers have averaged 360kg deadweight, with 100% achieving R-grade or better and earning £1,740 a head before deductions.

All are sold through ABP for Sainsbury’s organic range.

“At our last weighing, fat cattle were growing at 1.42kg/day for autumn-born steers in their last months of finishing, and 1.2kg/day for spring-born stores,” he says.

However, the best individual was an autumn-born steer which averaged 1.8kg/day over five months of winter.

This feeds through to financial performance which is high in the group on the Exeter University costings.

Despite high costs for forage against farms of its type, its overall variable costs are far below its cohorts, which is reflected in the farm’s gross margin.

At a stocking rate of roughly one livestock unit a hectare, this weighs in at £416/ha and £416 a head – well over £100 more than the average in the group.