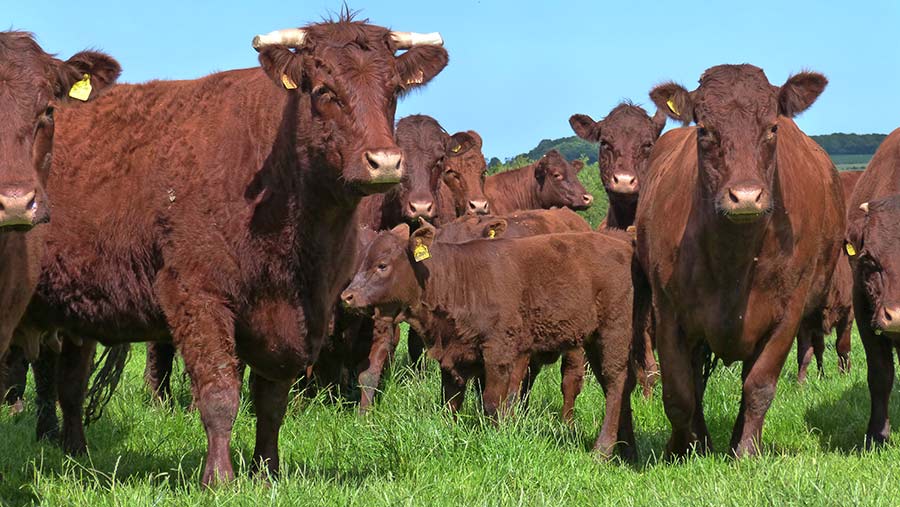 Mixed farmer Conor Colgan is using increasingly sophisticated methods and research to increase the efficiency of his farm in an attempt to become carbon neutral.

Relatively basic improvements in herd productivity have been achieved at Aidansfield, near Berwick in Northumberland, by changing breed, increasing herd size and selling animals at a younger age.

But Mr Colgan is now looking to use ground-breaking science to drive future progress. 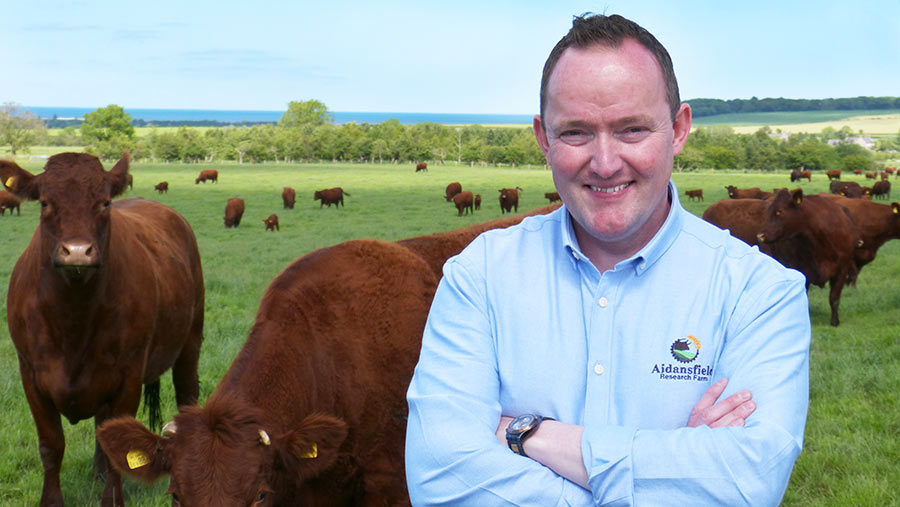 “It’s important the herd is efficient here, as this is 4.5t/acre wheat country,” says Mr Colgan, who farms on a heavy clay loam over a limestone substrate.

“The cows need to be producing an income of £800/acre to justify themselves against the wheat.”

Up until 2006, the farm finished steers and heifers at two years old from a herd of 60 cows, but by building a name for good-quality Salers heifers and finishing stock more intensively, the system has doubled its stocking rate.

Mr Colgan now sells bulling heifers at 12-14 months and all bulls of the farm are finished by 15 months of age, rather than selling much older steers.

This means there is room to stock more cows, with the stocking rate now at 1.92 livestock units (LSU) a hectare.

This has lowered the carbon footprint of the beef produced on the farm, because there is more beef being produced across which the carbon can be shared, explains Mr Colgan.

Methane emissions have been lowered and labour is being used more efficiently by finishing bulls at roughly 370 days of age, rather than steers at 540 days.

A further 5kg carbon dioxide/kg beef will be cut from the farm’s production by 2029, explains Mr Colgan.

This will be done by:

He aims to achieve this by improving grassland management and selecting the most feed-efficient genetics on the farm (see box below “How Aidansfield will further reduce herd carbon footprint”).

Mr Colgan’s goal is to run the herd at a 10% replacement rate and increase the net feed efficiency of the cattle by 20% in 10 years, with the end goal of being able to run 165 cows on 60ha (one cow an acre).

Current performance: Achieving about 2kg of daily liveweight gain over a 70-day finishing period in trials.

Target: A 20% increase in feed efficiency.

How they will do this: Eight GrowSafe feed bunks have been installed on the farm for net feed efficiency (NFE) trials. Coupled with weigh cells in front of water troughs, they are capturing how much feed individual bulls require to grow.

Feed intakes will also be measured in the heifers/cows when stock are housed through the winter to find the most efficient female lines and breed a herd with lower maintenance costs.

By finding the heifers and cows that grow and maintain body condition on less winter feed the farm will be able to increase stocking rates at pasture. Meanwhile, the margins and finishing times of animals in the feedlot should improve due to progress in NFE.

Target: Grow 12.65t DM/ha and use 8.85t DM/ha from eight smaller 3ha paddocks. Grass will be plate-measured and logged on Agrinet.

How they will do this: By halving existing paddocks with electric fencing and shifting cows more regularly. They are targeting entry covers of 2,500kg DM/ha and residuals of 1,500kg DM/ha.

Biostimulants (enzymes, acids, vitamins, hormones) will be evaluated for their use as a soil additive in improving plant growth, soil microorganisms and root mass.

Beyond 2029, Mr Colgan is targeting running a carbon-neutral farm by offsetting the remaining carbon after all his management changes have taken effect through sequestering (storing) carbon in the soil.

Biostimulants (enzymes, acids, vitamins, hormones) will be explored to increase grassland productivity and use of clover and other legumes will reduce nitrogen requirements, while maintaining grass yields that will capture carbon.

What is Aidansfield Research Farm?