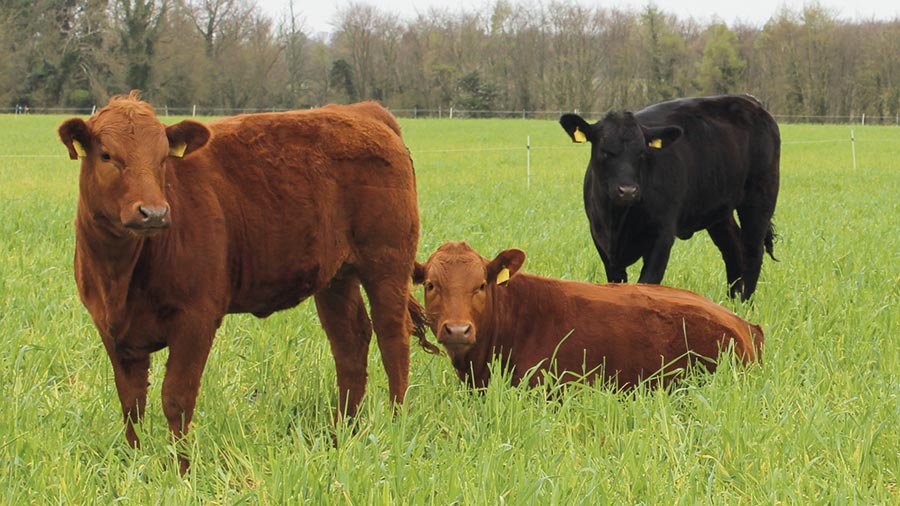 Incorporating grass in the arable rotation is part of Jeremy Iles’s plan to reduce concentrate feeding to beef animals while mitigating risk and safeguarding soil health.

It is an all-encompassing approach that aims to put the business in good stead to embrace new Environmental Land Management (ELM) scheme requirements, drive profitability and meet consumer needs.

See also: Forage analysis and how to interpret results on-farm

He explains: “We’re heavily selecting for feed efficiency in the bulls we are using or the embryos we buy. It has become very apparent they like the silage. They’ll eat a lot of silage, which is clearly cheaper than grain.”

Animals are selected using the Stabiliser breed’s weaning index and profit index to favour those that use forage effectively and wean well off grass alone.

Cattle are cell-grazed on pasture to maximise their genetic potential and aid soil health. 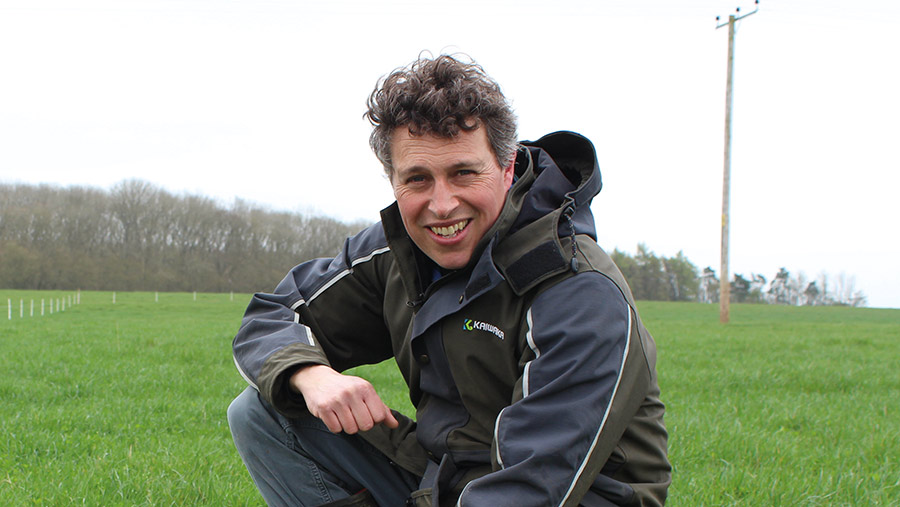 Having recognised the potential for grazing, he put in an additional 10ha (25 acres) of Italian ryegrass and white clover after wheat.

Grass is established in one pass using a combination drill. The two-year leys are followed by wheat, then barley, oilseed rape or maize, and back to wheat.

The strategy has evolved, with a further 11ha (27 acres) of the same mix being sown on a neighbour’s flood-prone ground that has a high blackgrass challenge.

Mr Iles believes grass has an important role to play in reducing run-off on wetter ground because soil infiltration rates tend to be two to three times greater in grassland than in wheat.

He also views grass as a crucial component in regenerative farming practices.

“It’s a good entry into no-till,” he says. “We’re conditioning the soil; it’s a good way to sort the soil structure – it’s a good healer.

Mr Iles is also planning to put in herbal leys for fattening cattle. In the short term, a further 30-40ha (74-98 acres) of the Italian ryegrass mix will be sown this year to finish steers.

Until now, males that did not meet the grade for breeding were kept entire and finished on forage and grain. By castrating this year’s bulls, Mr Iles aims to finish as many as possible on grass alone.

Continuing to select animals that convert forage effectively and adopting cell-grazing should mean this becomes a long-term strategy.

Steers will join the heifers grazing forage rye and vetch leys from mid-February to April. This spring, these leys have also been used to graze cows and calves because grass growth on the Italian ryegrass leys has been slow.

The forage rye and vetch mixes are planted after wheat and before maize to boost soil health. Half of the crop is baled and fed to the suckler cows, which do not receive any concentrate.

He adds: “My hope for the ELM scheme and stewardship is that it will encourage arable farmers to put ground into grass,” he says. “The Cotswolds needs beef because of the thin soils and, to me, it’s spreading risk.”

Cell-grazing cattle has resulted in an uplift in grass yields and increased stock-carrying potential, which should help boost overall farm productivity at Leafield Farm. (See table below.)

Cell-grazing involves grazing cattle at high stocking densities on high grass covers for short periods. As stock trample a proportion of the grass and muck over it, soil organic matter and above-ground biomass are increased.

Mr Iles started cell-grazing all grassland in 2018. Depending on the season, cattle will graze in this way from turnout in mid-March until the start of November.

In 2020, Mr Iles undertook a trial with Farming and Wildlife Advisory Group South West to look at Italian ryegrass and clover leys grown as part of the arable rotation.

Stock was weighed and performance compared to cattle run on a rotational grazing system where a 10ha (25-acre) field was split into four, and cattle were moved every three to four days.

Mr Iles now cell-grazes all classes of stock, although he is quick to highlight that management practices are evolving.

“The aims for this year are to rest the cells for longer between grazing [periods] and have the grazing duration in a cell much shorter by merging cattle groups or shrinking cell size,” he says.

This will allow for an increase in the total weight of cows and calves grazing a given area. He has a target in mind of 100,000kg of beef grazing/ha.

Leaving a higher grazing residual should improve the soil’s tolerance to drought and boost organic matter.

The increase in DM yields on the cell-grazing system, together with ongoing improvements in cattle genetics, should also enable stocking rates to be increased without the need to buy in feed.