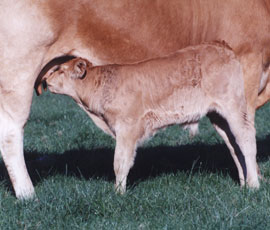 The average Scottish suckler herd producer could rear an extra seven calves a year, worth an additional £3,850, by taking steps to improve the fertility of their herd, according to a new guide produced by Quality Meat Scotland (QMS).

The guide, which was compiled by consultants from Scotland’s Rural College (SRUC) and launched last week, is designed to help producers assess their herd’s performance and identify areas for improvement.

A QMS producer survey revealed that for every 100 cows put to the bull, only 87 calves were weaned. This compares to a target figure of 94, which means the average Scottish farmer is missing out on seven calves.

By meeting the 94% rearing target the average 100-cow herd rearing 87% of calves with a moderate calving spread could gain an extra £35/cow or £3,500 a year, experts say.

As a minimum, an average store producer could see extra calf value returns of between £2,200 and £6,000 a year.

Mrs Peebles said finishers would also benefit from a tighter calving pattern as more even batches of calves would make feeding regimes easier and there would be less chance of bullying in the groups.

Improved fertility would also improve the uniformity of cattle, allowing farmers to sell additional batches of calves at slightly higher weights, which makes them more attractive to the buyers, she added.

Now is the perfect opportunity for spring-calving herds to assess herd performance and to identify where improvements can be made.

A Guide to Improving Suckler Herd Fertility is available on request from Quality Meat Scotland by emailing info@qmscotland.co.uk and can also be downloaded.