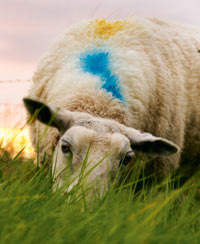 Domestic supplies of beef and lamb are likely to get even tighter over the next year as national breeding populations continue to decline, EBLEX says.

Analysis of official DEFRA figures shows that, in the five years between 2004 and 2009, the national sheep flock fell 15% to fewer than 14m ewes.

At the same time, the national cattle breeding herd declined almost 10% to fewer than 3.5m cows. Most of that decline was in the dairy population, EBLEX senior economic analyst, Mark Topliff said.

“Supplies will remain tight which will help keep market prices firm. I really don’t see the fundamentals changing much over the next year or so.”

Having declined by 13% since 2004, dairy cow numbers were projected to fall a further 3% or so over the coming two years as lack of sufficient milk price optimism and underlying issues over succession and staffing continued to take their toll, he said.

But the outlook for beef and sheep was slightly more stable.

The rate of decline in breeding ewe numbers slowed from 5% to 1% last year, mainly as a result of improved lamb prices. Mr Topliff said a similar-sized fall was likely in 2010, due to strong cull ewe prices and impact of EID, although numbers should stabilise in 2011.

The beef herd stabilised last year and was expected to remain relatively unchanged for 2010/11, largely due to improved store cattle values and some ex-dairy farmers moving into suckler production. The proportion of beef cows in the national herd was therefore expected to increase from 44% five years ago to 47% by 2011.