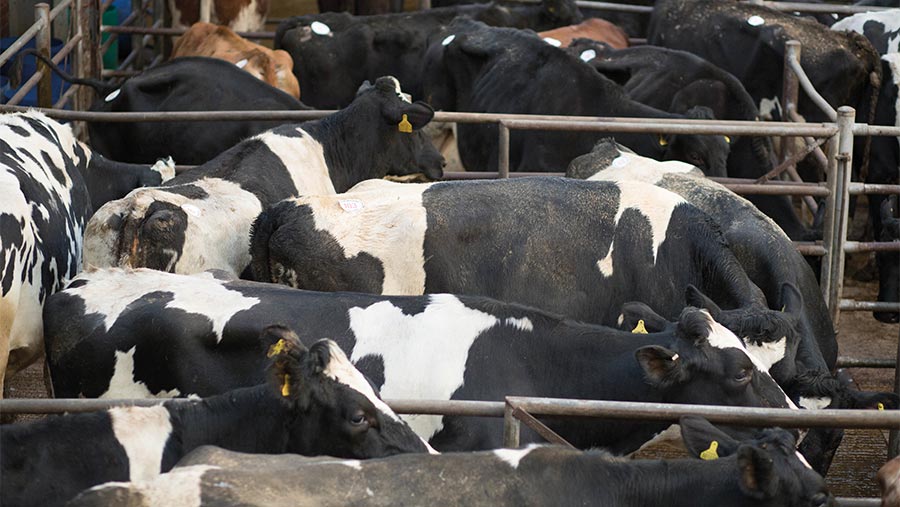 Surging cull cow prices are rewarding patient finishers who held on to cows in the spring as the coronavirus lockdown shook supply chains.

Mart entries plummeted in April to just 841 head (-56% on the year) in the second week of lockdown.

Numbers have since pulled ahead of last year, suggesting the strongest prices in almost two years have brought cows on to the market in force.

This has been helped by the re-opening of some fast food outlets.

“I think the volatility in cow prices is coming from the market constantly readjusting to demand under lockdown,” said Mr Wyatt.

“Demand for mince has been high all along. Initially this was at the expense of steaks, but now these have been promoted and are selling well, processors are finding they need cattle of all types.”

“People panicked for a little bit and held on to cows, although the trade didn’t drop too much really, only a couple of pence,” auctioneer Jack Pickup told Farmers Weekly.

Mr Pickup said good suckler cows were 10p/kg dearer than five to six weeks ago and the lean out-of-parlour cows were hitting about 85p/kg.

Cull cow prices have strengthened in late May and early June at Selby, where Richard Haigh and the team generally get entries of well-finished beef cows.

“Cows are scarce this time of year,” Mr Haigh said. “There’s also strong demand for meat. This is making these cows well worth feeding at the moment. You get your value back for what you put into them.”