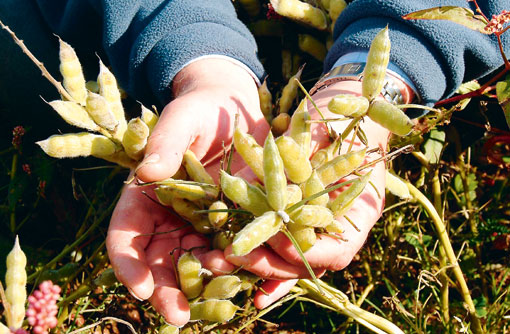 High protein lupins offer a sound alternative to bought-in soya on beef systems while undersowing the crop with grass will provide pasture post-harvesting.

Rob Priest farms 200ha (500 acres) near Holsworthy, Devon. He runs an organic system and therefore doesn’t use soya in his growing and finishing rations.

However, while he was impressed with its contribution to cattle performance he decided to stop growing it this year because wet conditions at harvesting proved too challenging.

“The cattle really loved it, so much so that they always licked the concrete clean. They ate it like it was going out of fashion and because they were getting the intakes they grew well and looked well,” says Mr Priest, of Kingsford Farm, Thornbury.

Mr Priest runs a Limousin-cross herd, keeping 250 cattle from birth through to finishing. When Mr Priest was growing lupins he would feed his calves a small quantity of the lupin and triticale forage in their ration. By 18 months the fattening cattle would then be fed 10-12kg a day with 6kg of crimped corn and 2kg of grass silage from red clover leys as an additional protein source.

The crop appeals to Mr Priest on several levels, in particular it gave him an opportunity to re-seed before harvesting. “We would sow the lupins and 10 days later when the seed had emerged we would go in with grass seed. They grow at the same time,” he explains. “When we took the crop off we were then left with a new ley of grass which was ready to grow.”

“The cattle really loved it, so much so that they always licked the concrete clean.”
Rob Priest

The lupin crop was sown with triticale because this high protein mixed legume forage has much higher fibre content than grass silage, allowing microbes in the rumen to efficiently digest the feed.

The only downside he experienced was difficulty in harvesting the crop. “In every year we grew it we had a wet summer and it was a lot of trouble at harvesting. We were always fighting the weather and we marked the ground. On paper it was the ideal crop to grow but perhaps it’s just not for our farm.”

Mr Priest now grows grass mixes and red clover for silage and will combine this with bought-in triticale corn.

Lupins are regarded as the only true alternative to soya that can be grown in the UK and represents an opportunity for beef producers to be less reliant on soya, according to David McNaughton, of Soya UK.

He says the significance of the crop is more than its nutritional quality; it appeals to farmers who struggle growing other crops. All major livestock regions in the UK have soils suitable for growing lupins, he suggests. Soil pH value was once a limiting factor but modern varieties are more tolerant.

“The soil needs to have a pH of 8 or above for it not to grow and that’s not common, unless the land is on very chalky down,” says Mr McNaughton.

“Every livestock farmer, regardless of location, can take advantage. It will grow just about anywhere, if the soil is lime, medium, medium heavy or free working, all are OK.”

The only soil he discounted was heavy clay, found mainly in Essex and Bedfordshire.

Success hinges on selecting the right variety for the end product and the geographical location. For forage crops, Mr McNaughton recommends white or yellow lupins mixed with triticale – the yellow variety matures slightly earlier than the white – and for combinable crops, white or blue.

“Farmers in the South of the country tend to combine a white and those in the North and West a blue. It’s all down to earliness,” he adds.

He advises organic farmers to grow it only as a forage crop because weed control in combinable crops can be a problem. “I usually encourage organic growers to use yellow with triticale because it matures a bit earlier. If it is harvested earlier there will be less weed material in it.”

Yellow lupins have the best resistance to disease but disease is rarely an issue in any of the three varieties, Mr McNaughton adds.