Incorporating maize meal into the feed ration of intensively finished dairy-bred beef bulls has been shown to significantly reduce the incidence of liver abscesses.

A trial led by Harper Adams University found that reducing the level of barley in the ration and replacing it with maize meal resulted in bulls with “perfect livers’’ at slaughter.

Liver abscesses are known to considerably impact the performance of cattle.

The study involved 40 seven-and-a-half month old British Blue-cross Holstein and Holstein bulls weighing an average of 318kg, with one group fed a 14% crude protein (CP) control diet and the other, a treatment diet.

In the control diet, the rolled barley content was 63.5%. In the treatment ration, this was reduced to 41.5% with 20% maize meal making up the shortfall.

Maize meal is a dried product imported from the continent and the US.

It has a higher metabolisable energy (ME) value than barley and although it has a higher starch content – 71% compared to 59% in barley – more of this is by-pass starch.

Simon Marsh, principal lecturer and cattle specialist at Harper Adams University, who supervised the study, says the liver scores in the treatment group were remarkable. 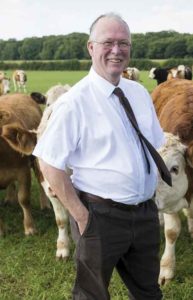 “The bulls fed the ration including maize meal recorded significantly lower (P=0.01) liver abscess scores and all of the livers were perfect.’’

But the results were not surprising, he says, because very high starch diets are associated with acidosis, which leads to the formation of liver abscesses.

Abscesses are a leading cause of liver condemnation in UK abattoirs.

The liver itself is not a significant financial loss to a producer, but reduced animal performance and carcass yield have a large economic impact.

Mr Marsh says the study did throw up one anomaly.

He would have expected an absence of abscesses to have resulted in performance benefits, but there was only a small improvement in the slaughter weight, daily liveweight gain and carcass weights of the maize meal-fed bulls.

There was no difference in the feed intakes or feed conversion rates. But both diets contained 15% soya hulls, which are high in fibre.

Mr Marsh believes that had these been removed from the control group and the content of rolled barley increased to 80% or higher – a ratio not uncommon in finishing systems – there would have been greater differences in the performance levels.

“The rations contained 34-35% starch “as fed” – 39% in the dry matter – which is a reasonably high starch content for an intensive beef ration.

“If the soya hulls were removed from the ration and replaced with cereals, as with rations including 80% or more of rolled barley, this would significantly increase the starch content to approximately 36-40%.

“This is more likely to cause issues with acidosis, in which case the effect of including maize meal in the trial diet might have been seen,’’ says Mr Marsh.

He believes the inclusion of rolled wheat in the diets, instead of barley, would have shown greater differences in performance.

“Producers should consider including maize meal if there is a significant quantity of rolled wheat in an intensive beef ration. Wheat breaks down rapidly in the rumen and can cause acidosis,’’ he says.

From birth to slaughter, the Continental-cross Holstein bulls returned a gross margin of £354 a head and the Holsteins £331.

The Blue-cross bulls were slaughtered at 13.1 months old at ABP Shrewsbury, which scored the livers with Harper Adams University student, Lauren Chesney, who used the research as part of her degree study; their carcass weights averaged 338kg.

At the time of the study, maize meal cost £156/t compared with rolled barley at £95/t so, taking into account a small performance improvement, worth £5 per carcass in the maize meal group, the control animals achieved a margin over feed £20 per head higher.

But Mr Marsh says prices fluctuate and the cost benefits could shift.

“A sensitivity analysis would show a financial benefit for maize meal if prices fall in relation to barley.’’

Mr Marsh says beef producers who get high numbers of livers condemned should consider incorporating maize meal in the ration.

These bulls were fed 100% of their cereals as grain maize and this led to a very significant improvement in performance.

Mr Marsh says high production costs of crimped grain maize, which can only be reliably grown in southern England or under plastic in the Midlands, had led to the maize meal study.