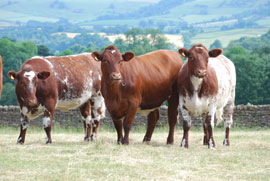 Morrisons supermarket will pay producers a premium of up to 20p/kg deadweight for an additional 16,000 native breed finished cattle a year.

These will supply a new traditional beef brand for the butchery counters in its 448 stores from September.

The requirements represent a 10% in increase in cattle numbers for the retailer, which is the only one of the UK’s top four supermarkets to stock 100% British fresh beef, pork, lamb and poultry.

The scheme is open to all British native breeds and crosses, paying a 10p/kg deadweight premium over Morrisons’ base price, but with Beef Shorthorns and their crosses attracting a 20p/kg premium, worth up to £75 a head.

The additional cattle will be slaughtered through the firm’s Woodhead Brothers subsidiary, which runs abattoirs in Lancashire, Lincolnshire and Aberdeenshire. These slaughter all of the retailer’s beef cattle, mainly bought direct from farm.

“We have been out meeting lots of finishers, our target is an extra 300 cattle a week. We’re confident we can meet this from September and we want it to grow further after that,” said farm operations manager Andrew Loftus.

Cattle must be finished on a 35% starch diet for 100 days, with starch preferably from a cereals source which produces a greater marbling effect on the meat than other sources such as potatoes.

The scheme’s carcass grid includes some grades which would normally be penalised. For example O+ cattle are included in the target specification.

Potential suppliers need to apply for approval at least 100 days before sending native breed cattle under the scheme.