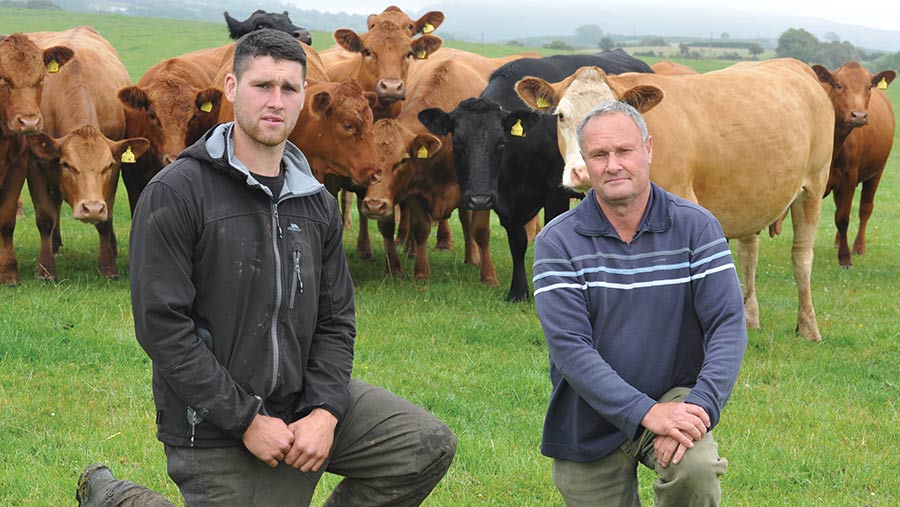 Home-rearing bull beef on ad-lib concentrates and straw has worked out marginally cheaper for a Welsh suckler enterprise than outsourcing the job to a finishing unit.

The Griffith family run a herd of 145 Stabiliser cows at Bodwi, near Pwllheli, and had historically finished half their bull beef animals themselves and the others at a specialist unit.

As a Farming Connect demonstration farm project, the business compared the cost of production in the two intensive systems.

The home-reared bulls were marginally cheaper to rear – the total costs per kilogram of liveweight gain for this group was £1.62 compared to £1.73 for the other group (see table).

The project involved 81 bull calves which were weaned abruptly in mid-October and introduced onto a diet of ad-lib beef nuts and wheat straw.

They were weighed and grouped at the end of December: seven were retained as potential breeding bulls, 34 of the heaviest were kept for home finishing and the remaining 40 were sent to the unit in Yorkshire the day after weighing.

Until that point, the cost of production for all the bulls was the same.

The home-reared bulls remained on a diet of ad-lib beef nuts and straw until slaughter while the bulls in Yorkshire were fed a total mixed ration.

The amount of feed they were allocated was weighed daily and the Griffiths were invoiced monthly for the feed consumed.

There was also a fixed daily charge per head to cover bedding and labour costs.

As the bulls were sold for slaughter over a period of three months, their cost of production was calculated as pence/kg of live weight gain (see table, below), says Edward Griffith, who farms with his wife and son, Jackie and Ellis, and his parents, William and Helen.

Ellis says the project had been a useful exercise that confirmed the family’s decision to switch to all home finishing. But there has been considerations have had to be made.

Home-rearing requires housing – for the Griffiths, it will mean not housing all the sheep as normal at the beginning of January.

About 150 of the later-lambing ewes will be housed in mid-February instead, and to fill the feed gap, 4ha (10 acres) of stubble turnips and oilseed rape are being grown.

Ellis adds that in an outsourced finishing situation, a farm is denied the nutrients from those cattle.

“If you send the cattle away, that’s four months of manure you are not getting.”

Despite challenging establishment conditions due to dry weather and then exceptional rainfall in August ahead of harvesting, the 11ha (27 acres) crop yielded about 80t of grain.

The original intention was to crimp the grain, but after looking at the options with their nutritionist Iwan Vaughan, the Griffiths opted for alkalisation with an ammonia treatment.

This can be used as a “complete feed” for intensively fed cattle, apart from the addition of minerals, trace elements and vitamins.

Moving away from creep

The bull calves – 75 born this year – were weaned in mid-October on to a diet of good-quality grass silage and the treated rolled barley, introduced gradually on top of the silage twice a day.

“They weaned nicely, and after three or four days, their consumption of the grain really picked up,’’ says Edward.

The silage and grain are fed behind a barrier in troughs.

It is the first year the calves have not been creep-fed ahead of weaning, yet they weaned heavier than in previous years.

This was probably due to an abundance of grass this year, says Edward.

“We usually feed creep for a month before weaning, but because we are now getting into larger numbers of cattle and we can mess up the fields when moving the creep feeder, we decided against it this year,’’ says Edward.

The animals were grazed on a rotational paddock system so always had fresh grass in front of them.

Stabilisers do well on grass, says Ellis. And the weaned calves adapted quickly to grass silage when they were weaned.

As the system was so successful this year, it is unlikely that creep will be used in future.