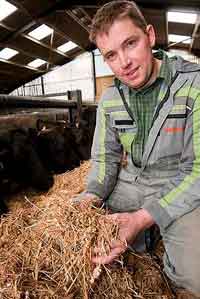 Finishing stock as quickly and efficiently as possible is the name of the game on any beef farm, so losing 5% of animals to acidosis and having cows on farm for an extended period forced a Northumberland farmer into action.

Over the years, Martin Grix (pictured) of WO Grix and Partners, Hill Head, Morpeth, has moved away from finishing bull beef to cull cows.

“We made the decision to finish cull cows to take advantage of cull animal prices,” he says. “We now have 350-400 cows on farm at one time, with the majority bought as beef culls.”

But the change in system was not without its difficulties, says Mr Grix. “We started by feeding cull animals the same all-cereal diet we had used to feed bulls, but experienced some real problems.

“The first week to 10 days of cows being on farm was really hard work. Cows appeared to be doing well and would then be hit with a sudden bought of acidosis.”

In fact, acidosis became such a problem that the farm was losing about 5% of its animals to diet problems.

“We got to the stage where we were rationing food to try to prevent these problems from developing but, by doing so, we were making cows hungry – it was a double-edged sword.”

As a result, Mr Grix spoke to Keenan and hired a six-paddle mixer wagon, alongside nutritional support – and he’s never looked back.

“We have made a few modifications to the diet to improve ration presentation,” says Keenan nutritionist Seth Wareing.

“There is still a large amount of barley in the ration, but we have upped the proportion of straw using available supplies on farm.” Pot ale and potatoes have also been added, he says.

“The trouble is, the vast majority of cull cows have never seen cereals, and the acidosis problem is exacerbated in older cows that have been used to being at grass.”

It is all about optimising the presentation of the ration, says Mr Wareing. “The new Keenan Mech Fiber rationis light and fluffy, with a bird’s nest-type structure. This ensures high-energy particles are held safely in the mix to prevent the onset of acidosis.

“The Mech Fiber allows us to feed a high-energy diet and increase the ‘miles per gallon’ achieved by the ration. By staying in the rumen longer, we are achieving better utilisation.

“And there is no need for a lengthy build-up period to get cows used to the diet.”

Mr Grix says the improvement has been unbelievable. “As soon as cows are on farm, they can go straight onto the full ration and we have virtually eliminated deaths from diet problems – cows are definitely a lot happier.”

The number of laminitis cases has also been reduced, he says. “We used to get one or two cases of laminitis, but this problem has almost disappeared.

“We are always looking at ways to cheapen the diet without losing performance.

“The altered ration is a lot cheaper than the full cereal diet – we are using cereals and straw which we already have at hand.”

Mr Wareing says the farm can use different products in the ration depending on what is available at the time.

After five months, the Grixes bought the wagon and have begun using it in conjunction with the Keenan PACE box.

PACE is a means of transferring Keenan knowledge without being physically on farm, says Mr Wareing. “The box runs alongside the mixer wagon and gives easy-to-follow information on how to process the best ‘physical’ mix.”

This information is relayed to the person mixing the ration via a display box. “The box displays what component of the ration needs to be added next and how many rotations of the paddles are needed,” he adds.

Mr Grix says this has been a big step forward for the business. “PACE is so easy to use – we just follow the mixing instructions displayed on the box and it guarantees every single mix is the same as the last,” he adds.

The ration changes have significantly improved production efficiency, he points out. “Before we implemented the system, cows were achieving growth rates of 1.1kg to 1.2kg a day and were on farm for an average of 100 days.