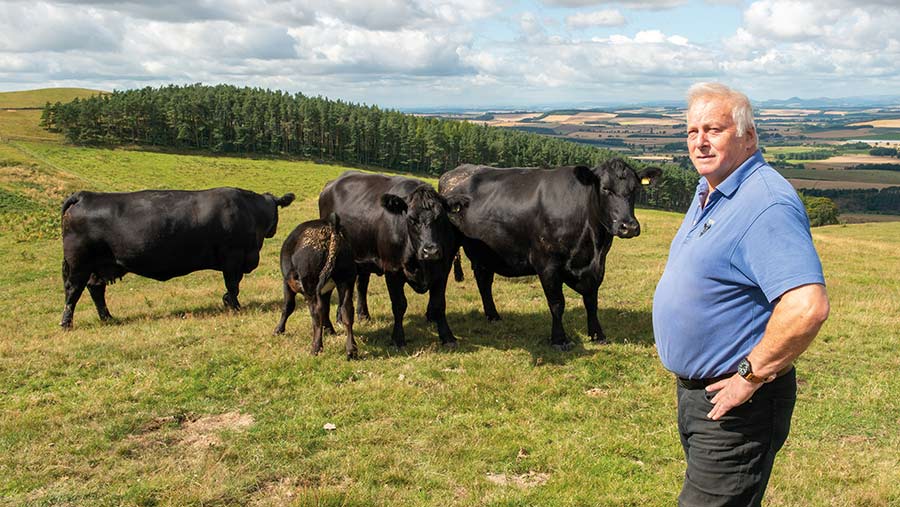 A marketing partnership with a rival English breeder has enabled a Scottish Angus herd to treble its bull sales, rewarding the herd’s focus on cost control and type.

The Playfair-Hannays, trading as Playfair Farms, of Morebattle Tofts Farm, Kelso, sold around 12 bulls annually 10 years ago before teaming up with Paul Westaway of Melview Angus, Gloucestershire.

Playfair Farms sold close to 40 bulls last year; about half of these were sold through Melview.

The Playfair-Hannays benefit from collaborating with the 70-cow Melview Angus herd because Melview is within two hours’ drive of a million dairy cows.

With twice the number of pedigree cows as the Melview Angus herd, Playfair Farms brings scale to the partnership. Together they are striving to sell 85-90 bulls this year, mainly to Mr Westaway’s dairying clients, who want easy calving, short gestation, low-input sweeper bulls.

“The partnership is straightforward, and we get on well,” explains James Playfair-Hannay, who manages the cattle enterprise alongside family members and business partners Patrick, his father, wife Debbie and son Robert.

The Playfair-Hannays retain ownership of the bulls until payment. Melview Angus gets a fee covering marketing, commission, haulage and feeding from the sale price.

Bulls are typically only held at Melview for a few days or weeks. This year, Tofts sent 14 bulls down to Gloucestershire between 11 and 14 months of age and they were all delivered to customers within 10 days.

The family farm two farms rented from the family and a third under a contract farming agreement, each three miles apart.

The three farms (Morebattle Tofts, Clifton on Bowmont and Yetholm Mains) are similar, starting with arable on the gravelly valley floor at 91m, grassland leys on the hillsides and dry hills up to 518m for winter cattle.

The pedigree Angus herd is farmed at Morebattle Tofts. Beef Shorthorns are kept at Clifton on Bowmont, where animals that don’t make the Angus herd are run in a B herd and resultant Shorthorn crossbreds are taken to Yetholm Mains and farmed as commercial sucklers.

Each farm has loose housed sheds and a feeder wagon, straw bedder and forklift. Machinery cost is managed by buying good second-hand gear. Machinery is maintained on farm where possible. The Borders Machinery Ring is used to hire in specialist equipment.

The cows have been costed through a benchmarking group. This made the family scrutinise big cows weaning small calves or no calf at all.

It costs the farm roughly £750 to keep a 750kg cow. This covers variable and fixed costs as well as a £30,000 annual wage bill. Every cow that doesn’t produce a calf for sale can add up to £20 of extra cost on every cow on the farm.

Historically, the Tofts cows averaged 450kg, in keeping with the trend at the time. However, since the 1980s James has increased cow size to 750kg, the optimal size for the farm.

The focus is now on predicting heifer efficiency by measuring heifers (see box) and weighing cows at weaning.

If length is greater than girth, they get sold or drafted, says James. “We want a deep barrel of a cow – this offers room for vital organs, rumen and a calf.”

Natural service, artificial insemination and embryo transfer are used. Semen is taken from homebred bulls as an insurance policy and imported from abroad to tap into leading genetics.

Genetics from the UK, US, Canada, New Zealand and Australia have been used to improve the herd.