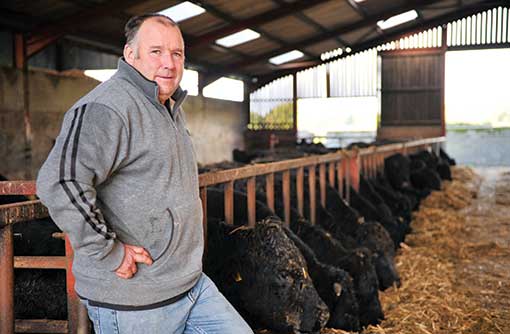 A more managed approach to grassland has helped increase profitability on a Welsh beef farm.

Adopting a grazing system more commonly associated with dairy farms is allowing one Welsh beef producer to increase his stocking rates at grass and cut his feeding costs.

He sources cattle as stores for fattening between six and 25 months, either from livestock markets or from local farms and fattens 250 cattle annually.

Mr Powell traditionally grazes cattle on a set stocking system at Rhosferig Farm, Builth Wells, and finishes them on a diet of home-produced red clover silage, a wholecrop silage of peas and barley, crimped wheat and molasses.

But he was keen to find out if a more managed approach to grazing would make his system more profitable.

Through his role as a Farming Connect Demonstration Farm, a trial was established which involved 29 of Mr Powell’s Welsh Blacks grazing 5.2ha split into four paddocks with an electric fence.

The paddocks were grazed between 10 May and 27 September, with an additional 2ha brought into the rotation in August as grass growth slowed due to the very dry weather.

The cattle were given fresh grazing every four to six days.

Independent grassland specialist Gareth Davies, who advised and monitored the project, costed each kg/DM of grazed grass at 8p. The total cost of dry matter consumed was £4,162 and the total weight gained 5,539kg.

During this period, cattle achieved average liveweight gains of 1.4kg/ day and the cost of the feed that went into producing every kilogramme of the weight gained averaged 75p. 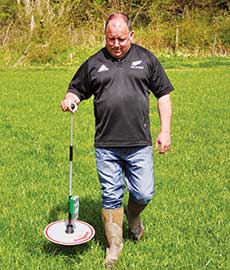 Mr Powell, who farms with his wife, Tracy, says he would never have achieved those results on his traditional set stocking system and it will now reduce the cost of finishing the cattle at housing.

“An electric fence is a very cheap tool to get more from grass,” he says.

What really surprised him was how rotational grazing encouraged the cattle to fully utilise the pasture.

“Having quality grass put in front of the cattle made a big difference. We couldn’t believe the weight gains that could be achieved from grass alone.

“There is less waste too because the cattle aren’t selective in their grazing.

“We can definitely increase our stocking rate on this system because it promotes grass production.

“The grass is such good quality that the animals eat everything that grows.”

For the Powells, what the trial demonstrated was just how many cattle could be grazed on a small area through rotational grazing. Next year they plan to run 150 animals on this system, splitting the herd into groups of 50/paddock.

A core focus of the business has been to maximise production from home-grown forage and crops.

“Given our location, it is too expensive to ship in products so it is important we grow good-quality grass,” Mr Powell explains.

“This is becoming ever more important as our costs shoot up. We have got to cut our costs to stay competitive in the marketplace. We don’t want to put up more expensive sheds so if we can manage our grass better we can keep the cattle out longer into the season.”

He urges livestock farmers to better understand the growth potential of their farms.

“Because most beef and sheep farmers have set stocking systems they aren’t aware of the sheer quantity of grass they can grow and the value of that grass,” says Mr Davies.

“Rob is achieving 100kg/DM/ ha/day from his reseeds and 68kg across the whole farm.

“Under a set stocking system he just couldn’t achieve that.”

Mr Davies says grassland farms have the potential to use 10t of DM/ha and yet the average for the country is just 6t/DM/ha.

“A change to their management practices could potentially lead to the production of an extra 4t/DM/ ha, which would mean they could lower their costs or carry extra stock. If they could grow more grass it would give them options.”

Mr Davies says rotational grazing is the best way to manage grass and it improves productivity by giving grass time to recover, with the rest periods boosting growth by up to 20%

Grazing pressure is important because if there are too few animals on a block of land they will eat the best of the grass and leave the remainder. “Heavy numbers on small areas is definitely the way to go,” explains Mr Davies.