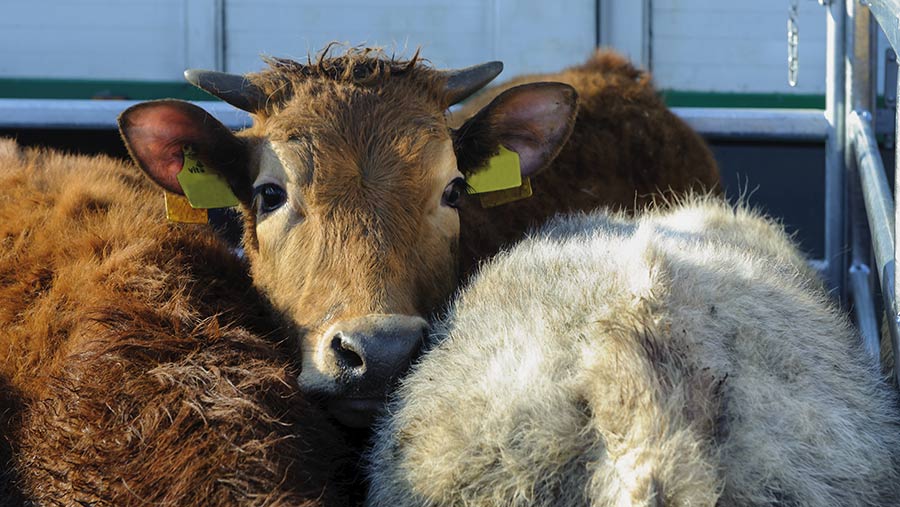 Confidence has grown in the suckler sector as flagship suckled calf sales have continued to push close to, and occasionally pass, the 250p/kg mark this autumn.

Many sales have seen prices up 30-50p/kg on last year’s beef crash and compared to 2018 levels – when trade was marred by low weaning weights and feed shortages – prices have risen 15-20p/kg.

Onlookers have at times been aghast at the price of forward store cattle, but auctioneers stress these animals will soon be being cashed.

Looking at the longer term, analysts said tightening UK cattle numbers (-2% on the year) and the renaissance beef has enjoyed with British consumers, are among reasons to be cheerful. Although in an unprecedented year nothing can be taken for granted.

Trade topped with eight-month old Limousins weighing 375kg and made £920 a head, followed closely by 450kg Blue calves at £905 a head, and five eight-month-old Charolais cattle weighing 385kg and sold for £905.

An entry of 527 heifers were up 40p/kg on the year at 222p/kg and topped at 293p/kg. Peter Huntley and Gethin Rees of Exmoor Farmers Livestock Auctions reported confident buyers.

Entry numbers were up 60% and averages were up £132 on the year for steers and heifers combined, as 125-head found new homes.

David Bowman, market manager for Hopes Auctioneers, said: “There is currently a good market for heavy bulls and 520-600kg heifers. If you get £1,500-£1,600 or more for prime cattle, it’s a good trade, and that is bringing confidence.”

Market manager and auctioneer Stephen Walker said: “As long as prime cattle are a good trade people will pay good money for the stores and be willing to take the gamble. The industry probably feels as confident as it ever has.”

6.1%
How much total UK beef sales were up on the year for the 12 weeks ending 4 October, driven by continued demand for ready meals, marinades and roasting joints

68p/kg
How much dearer steer calves were on the year at Knighton’s Brecon and Radnor suckled calf sales, at an average of 291p/kg (£927 a head)