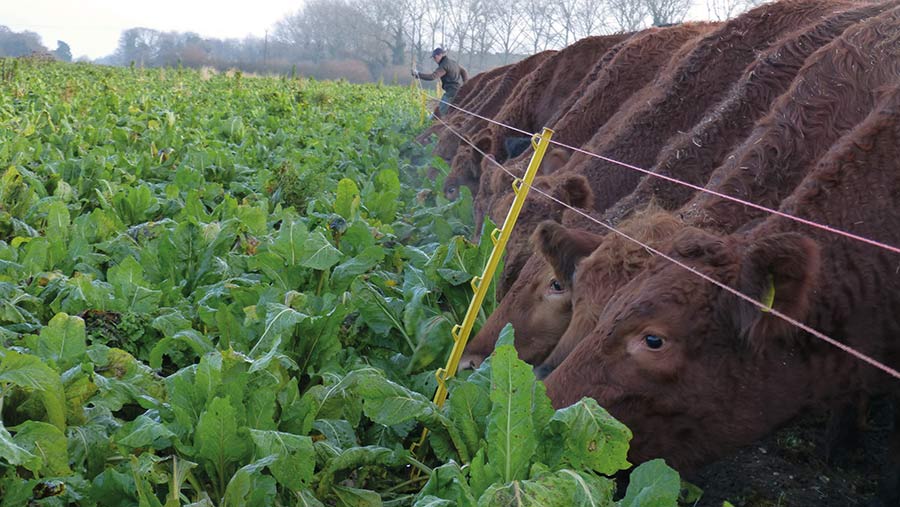 A Norfolk family is reducing cow numbers to control winter feed costs and focus on running the herd to benefit the landscape and sheep enterprise.

This year, they plan to sell 25-50 females, following a decision to run a herd of 50-75 cows more regeneratively at home.

This should eliminate the need to rent wintering crops from neighbours, which will cut travel times and mean valuable nutrients aren’t being exported off the farm, says Mr Evans.

Over the past seven years, the financial aims of the herd have shifted from trying to turn a profit of £100 a cow mated, to wintering a cow for £100 or less.

“We aren’t downsizing because of the cows – the genetics are good. It’s just the spread-out nature of the farm and our system that lets them down. Fodder beet is a good crop too, we just can’t grow it at home.” 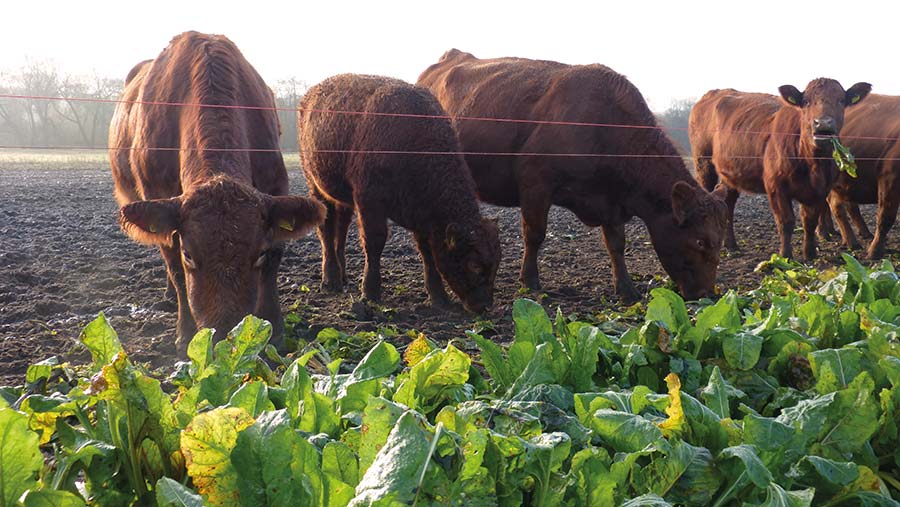 Cow numbers are being cut back because:

Richard and Sue have four children in their 20s – Emily, Bob, Claire and Katie – who are all keen on farming.

While it’s possible the younger generation will all want to farm, there needs to be cash in the business to allow for diversification and investment.

Cash from breeding stock will be useful as generational change occurs, and the herd can be expanded again in the future if desired, explains Mr Evans.

“The way I see it, our cows can be one of three things – an enterprise, a job or a hobby,” he says.

“An enterprise makes a 10% return on capital employed, can afford to pay a wage and achieves growth. Whereas a job makes enough cash to pay you £15-£20/hour and a hobby is nice to have and something to do when you’re not earning money.

“If we could get £100 a cow net profit, then it would be an enterprise. At the moment, we are hoping to run the cows as a job; one that suits the landscape and sheep at that.”

Despite concerted efforts to cut costs and increase output from the sucklers, the cows are not as productive or efficient as the sheep, admits Mr Evans.

A profitability drive back in 2013 saw Mr Evans try to cut costs and increase margins to a combined total of £400 a cow.

Three years later, the business was £374 a cow better off (see “How the Evans family tried to drive suckler profit in 2013”).

However, to make running a larger herd work as an enterprise long term, Mr Evans targeted a net profit of £100 a cow, but this was never realised.

“A cow cannot compete with a lowland ewe on a commercial basis,” he explains.

“Ewes wean their weight at five months, while a cow can only wean half of its weight by six months.”

Instead of focusing on diluting fixed costs across 200 cows or more, Mr Evans is placing more emphasis on his passion for farming sustainably to manage natural habitats and improve soil health.

He believes the current wintering system could be adapted to benefit the farm overall, while the Stabiliser cows can continue outwintering in a low-cost system.

Currently, the cows and their heifer calves are outwintered on fodder beet and supplementary hay on a neighbour’s field for 70 days from November to January.

Cows then return home, where heifer calves are weaned and cows are fed hay and wintered on sawdust/wood chip corrals for another 70 days.

Mr Evans says the system works well, but, crucially, he spends too much time travelling two miles down the road each day to shift the electric fence, and every other day to cart hay to the cows in the first half of the winter. 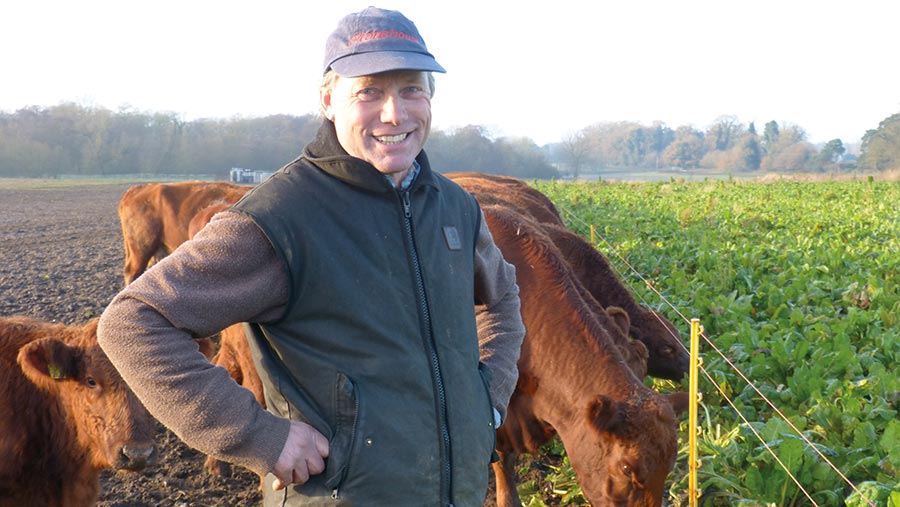 This winter, the fixed costs at home have been worked out as only £539.58 for 70 days. This is for 15min on a tractor every other day and 10min labour each day.

However, this time does not include the cost of keeping heifers through the winter, which by this point are weaned, but it does mean lower fossil fuel use.

With the herd getting smaller, fixed costs are not shared across as many cows, so the lower travel and labour time will be vital to keep costs low to help margins.

Another benefit of wintering at home is that the muck will remain on the home farm.

Mr Evans has become increasingly interested in bale grazing on deferred grass, while cows have the option of walking back to sawdust/wood chip corrals. 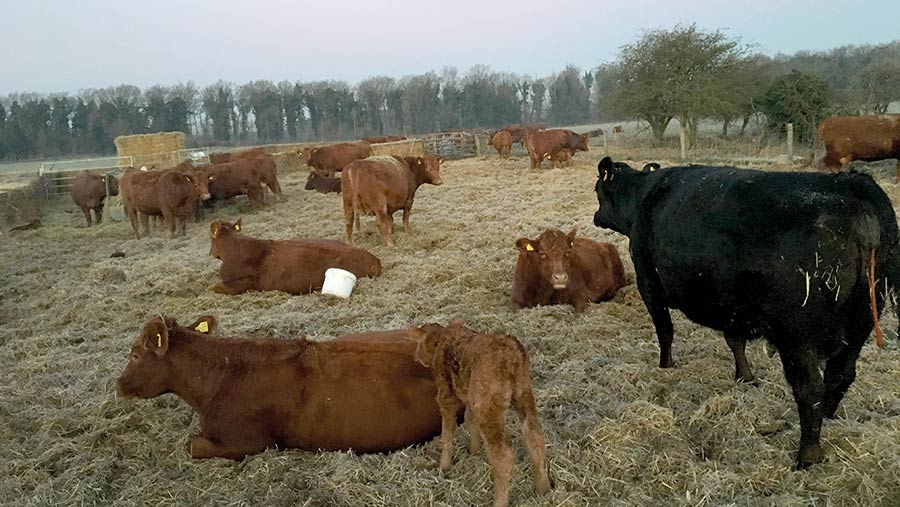 From a regenerative farming and carbon efficiency point of view, Mr Evans is hoping that feeding clover hay on old pasture will increase clover plants in the sward without the need for a plough or drill, and directly add manure without a muckspreader and loader.

This year, a mob of 20 cows is being strip grazed on a 4ha plot of deferred cocksfoot at home. Mr Evans hopes this increases soil organic matter, drought tolerance and sward productivity for ewes with lambs in spring and summer.

Mr Evans knows there is strong demand for woodchip as a mulch or soil improver for gardeners, and will explore this as an additional income stream.