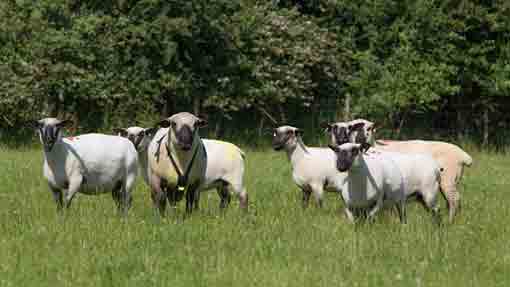 Ewes with the correct body condition score at tupping will produce a higher scanning percentage and rear more lambs than those that are too thin or too fat.

That is according to new results from a study on key performance indicators (KPIs) by Eblex, where ewe body-condition score (BCS) and weight at mating had a knock-on effect on subsequent lamb weaning weights.

Nerys Wright, Eblex assistant regional manager, says ewes may have lost some condition during lactation this summer and managing them so they have the opportunity to regain this before tupping may see more kilogrammes of lamb weaned.

The target BCS for ewes at tupping on an individual farm will depend on ewe breed, the lambing percentage and farm terrain, but would typically be about:

It may be possible for ewes to gain 0.5 BCS during flushing and tupping, when enough feed is available. Supplementary feeding, using concentrates, whole oats or barley, or high-energy supplements such as feed buckets, could be considered to boost thin ewes below their target.

However farmers must continue supplements for three weeks after removing rams, Ms Wright explains, as it takes this long for implantation to occur after fertilisation. Avoiding sudden dietary changes at this crucial time is vital to minimise the risk of embryos being lost before they attach.

“If ewes are more than 0.5 BCS over target in the lead-up to tupping, do not starve them, but do not allow them to gain any more condition.

“Flushing ewes that are BCS 4.0 or over will have no impact on scanning percentage, as overfit ewes have a higher rate of embryo death, despite higher ovulation rates,” she says.

Once ewes are pregnant, the aim should be to maintain BCS. If ewes are on or over target, 0.5 BCS can be lost during mid-pregnancy without affecting foetal growth.

Scanning offers one of the last opportunities to separate ewes based on the results and BCS. At this stage, the target BCS would typically be:

Ewes below target BCS should be separated and managed to gain some condition (0.5 BCS) during the second and third months. It is crucial that they do not lose any more condition, says Ms Wright.