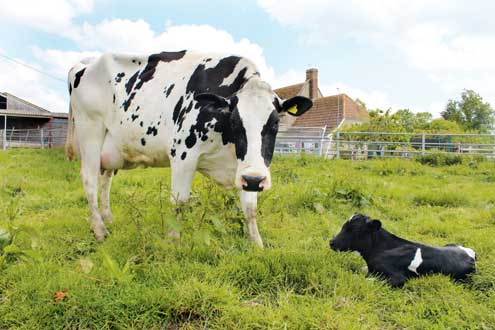 Although many farmers accepted drops in milk yield as a consequence of a bad year last winter, in many cases production losses could have been avoided by addressing ration balance.

Robert Symms was one such farmer who saw yields fall back by about two litres a cow a day and attributed it in part to average forage quality. As a result the farm had begun to chase yields by adding extras to the ration.

“We had tried adding rumen-protected fats and yeasts to the TMR and also increasing concentrates in the parlour,” says Mr Symms who farms with his wife Bryony and son Jake at Batsons Farm, Yeovil.

“On the advice of our feed supplier, we just kept increasing protein in the parlour and at one stage we were feeding a maximum of 8kg of a 26% protein cake.”

Despite this, yields just weren’t where they should have been and Mr Symms says cows simply weren’t happy, while fertility was also suffering.

Nutritionist Rob Mintern of CKA Independent Nutrition and Feed Sourcing says pushing protein levels up to chase yields was a common trend last year. However, in most cases this was not the answer.

“It’s important to investigate why you’re seeing a yield drop. It could be for many reasons, from health status to mycotoxin challenge, but more often than not, more cake is not the answer,” he says.

As was the case in Mr Symm’s herd of 175 Holsteins, an imbalance in the ration is often the cause of the problem.

Mr Mintern also says part of the reason cows weren’t milking as well from the farm’s silage was the fact the analysis results they were using were not representative of what was in the clamp.

“Regular, accurate silage analysis is really important so you know exactly what you’ve got and can balance the ration accordingly,” he says. “Samples should be taken every month as the clamp will analyse differently as you move through the year.”

After re-analysing silage stocks and dissecting the diet on a ration programme, Mr Mintern made a number of changes.

“When I started working with Mr Symms in November, cows were receiving a high-protein cake in the parlour and a high-energy, low-protein TMR, which is the wrong way round,” he says.

As a result Mr Mintern advised the protein should be reduced in the parlour and increased in the TMR. In doing so, milk production would be driven in late-lactation cows, while promoting health and fertility in fresh calvers.

“We changed the parlour cake from 21% protein to 16% and increased the grass silage in the TMR and the level of high-protein molasses. By doing so we also reduced the rape-soya mix, which reduced costs.” Protected fat was also taken out.

Mr Symms admits accepting the ration changes required a complete change in mindset on his part. “We’d always been told it was about protein, protein, protein. Then Rob came in and told us to lower the protein in the parlour cake. It was chalk and cheese advice, and to be honest, I thought the milk tank would be empty,” he says.

However, over the six to eight weeks that followed, production increased by two litres a cow a day, equating to an added income of £105 a day.

Mr Symms says bought-in feed costs have also dropped by about £5,000 a month since December. “We’re very happy,” he says. “At one stage we had less than 4,000 litres a day in the tank when it should have been 4,800. If it had stayed at this it wouldn’t have been sustainable.

“We’ve now taken the long-term view and focused on steadily increasing yields while ensuring cows get in calf. And we now have the confidence to reinvest and we are planning on building a new Greenfield site,” says Mr Symms.

Mr Mintern says concentrate costs a litre have also dropped to 8p/litre in February/March when they could have been up to 12p/litre prior to the changes.

The money saved on bought-in feeds has also meant the family can target their spending on other areas for improvement such as dry cow rations, minerals and youngstock rearing.